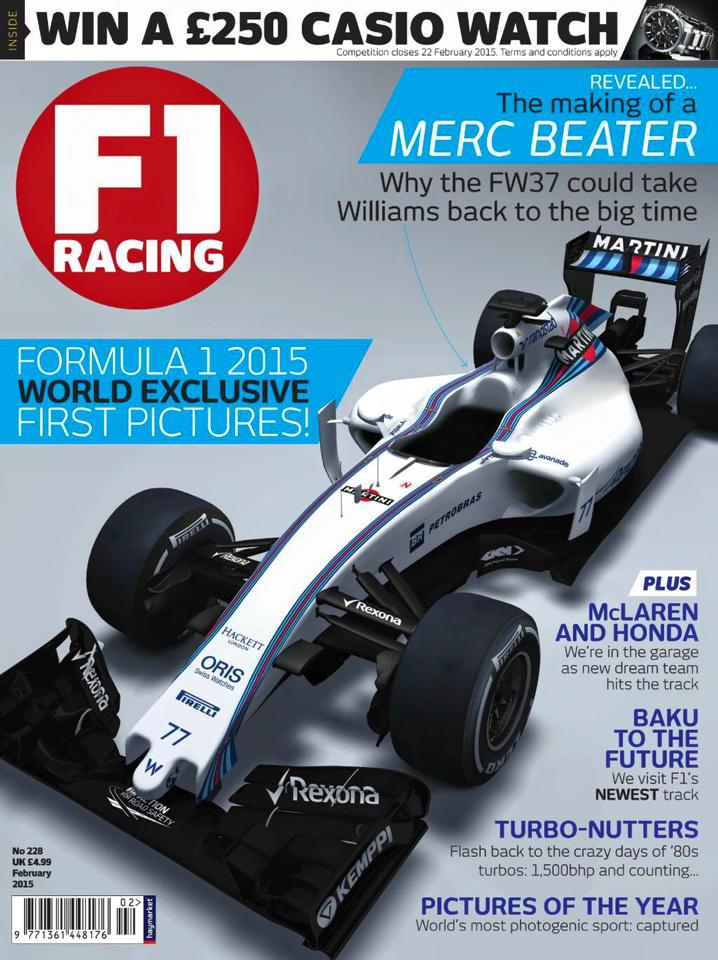 WILLIAMS MARTINI RACING 2015 car Williams Mercedes FW37 on the front cover of Haymarket’s F1 Racing Magazine. Following on from a successful season in 2014 Williams hopes the FW37 can continue the positive momentum into another competitive season of racing.

‘The notion for the FW37 was to look closely at the FW36 and its performances,’ says WILLIAMS MARTINI RACING Chief Technical Officer Pat Symonds. ‘We then went about recognising what had worked well and identifying and resolving the areas that we felt needed to be improved. Although the aerodynamics of the car were impressive there is always room for improvement particularly as we handle the new 2015 nose regulations ’

The design of the FW37 has stemmed from the performance of the FW36 but the conceptual ideas came long before the 2014 successes.

‘The first conceptual stage of the FW37 came before the FW36 had turned a wheel. The main element to this is understanding the rule changes and how they will affect the design of the car, from here we can start see if our ideas will fit within the regulations.’

The performance of the FW36 in 2014 saw the team move forward from ninth in the Constructors’ Championship to third, obtaining nine podiums throughout the season and a front row lockout at the Austrian Grand Prix.

‘The desire to beat Ferrari to third place in the Constructors’ in 2014 meant we pushed our development through to late autumn, but the size of the team is now at a point where it was able to sustain this development whilst still working on the FW37.’

With the regulations relatively stable from 2014 the team went about developing the FW36 with the additional changes necessary to meet the 2015 rules.

‘We felt we came up against design barriers in the FW36 and so took the opportunity to remove those barriers for the benefit of the performance. The FW36 carried a reasonable amount of ballast, so we were able to make alterations to the design for added performance without the fear of adding excessive mass.’

The layout phase of the car was completed by the summer break in August, with work on the new front bulkhead a main priority for the designers and aerodynamicists as the changes to the regulations had their effects on the car.

‘The change in regulations offered us a slight headache. The new front bulkhead and nose geometry had much more of an impact than we had initially anticipated and the effect on the aero was profound. The team have worked hard on pulling back the deficit these regulations have made for us.’

After a strong 2014 the team has aims to continue improving in pursuit of podium finishes throughout the 2015 season.

‘The more rule stability there is, the closer the field gets. I hope as a team we are more capable of maintaining the forward momentum to catch Mercedes, than the teams behind us are of catching us. It’s not just about stable regulations but also about the team and every individual that works here moving forward and improving.’

Frank Williams, Team Principal concluded ‘The team had a fantastic season last year, we are aiming to replicate this development over the winter and to start the 2015 season in a strong position. We have an enormously talented group of people here at Williams who want nothing more than the team to do well. This passion produced a great turn around in fortunes for the team in 2014 and everybody has worked tirelessly to continue that climb up the grid.’

‘We have added a few more high profile names to accompany the incredibly supportive group of partners we have,’ Frank Williams added. ‘After a very strong first year with Mercedes we are looking to further develop the relationship as we look for more podiums in 2015. I feel this year will be equally as exciting as the last and look forward to seeing the car on the grid at the first race.’