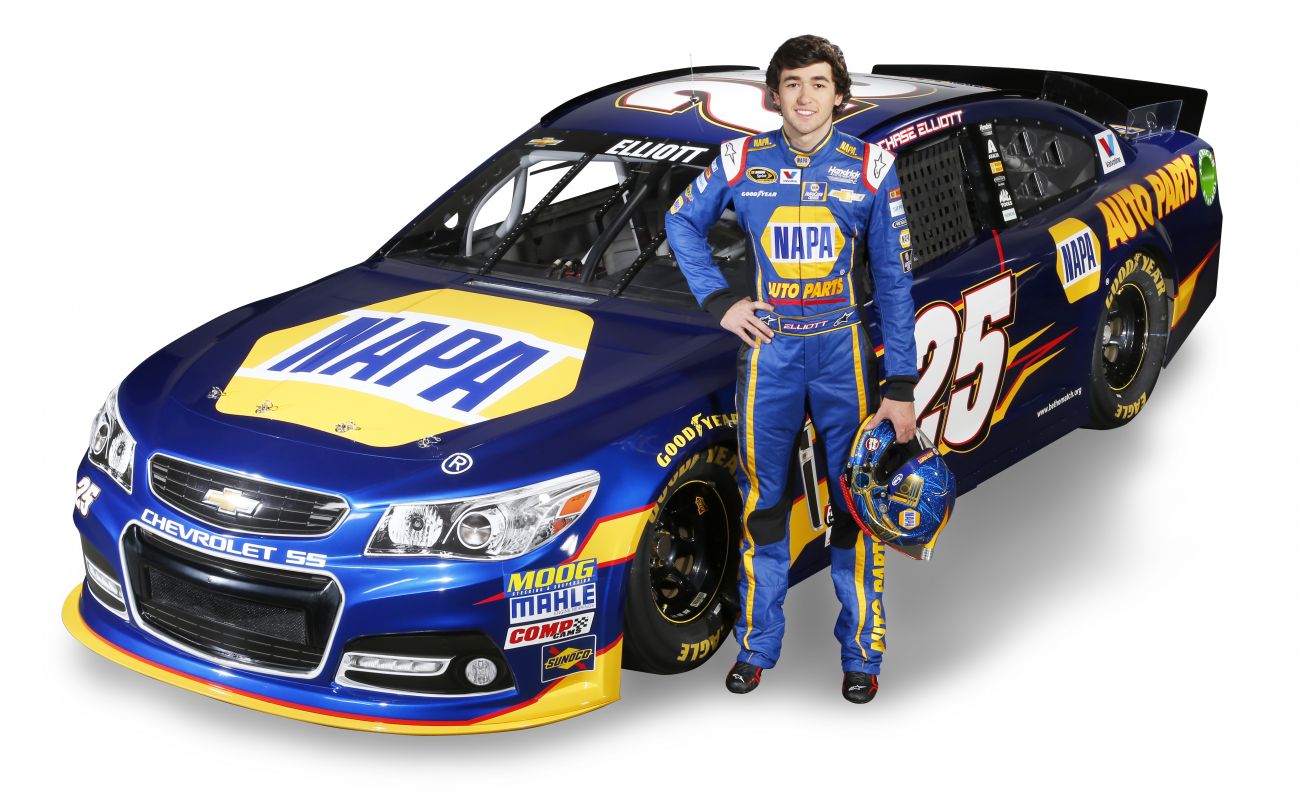 “Chase brings the kind of intangibles that make him the total package as a driver,” said Hendrick Motorsports owner Rick Hendrick, who announced the news this morning during the team’s season kickoff employee event. “Not only is he a special talent inside the race car, but there’s a natural combination of competitiveness, work ethic and smarts that you rarely see. Chase’s personality and demeanor make him popular with fans, teammates and sponsors. He’s a great fit for our organization on many levels, and we feel he and Alan will be a successful combination. There’s a lot to be excited about.”

In preparation for 2016, Elliott, 19, will make his Sprint Cup debut later this year as part of a five-race schedule with primary sponsorship from NAPA AUTO PARTS. The Dawsonville, Georgia, native will be paired with veteran crew chief Kenny Francis during the limited campaign.

Driving the No. 25 NAPA AUTO PARTS Chevrolet SS fielded by Hendrick Motorsports, Elliott will be entered in 2015 Cup events March 29 at Martinsville Speedway, April 25 at Richmond International Raceway, May 24 at Charlotte Motor Speedway, July 26 at Indianapolis Motor Speedway and Sept. 6 at Darlington Raceway.

“Chase has been a fantastic ambassador for NAPA,” said Gaylord Spencer, senior vice president of marketing for NAPA AUTO PARTS, which also is primary sponsor of Elliott’s JR Motorsports team in the NASCAR XFINITY Series. “As he embarks on this important next step in his career, we’re proud to support him across both series in 2015 and look forward to an exciting year on and off the track. The NAPA Family is behind Chase 100 percent.”

At the age of 18 years, 11 months and 18 days, Elliott became the youngest champion in any NASCAR national touring series when he won the 2014 XFINITY Series title. The first racer in NASCAR history to win a championship and rookie of the year honors in the same season, he also was voted by fans as the series’ most popular driver.

Elliott’s 2014 season included three wins, two pole positions and 26 top-10 finishes in 33 races. His first victory (Texas Motor Speedway) came in his sixth career series start and made him the second-youngest winner in XFINITY Series history (behind Joey Logano). He completed 99.5 percent of the 6,063 total laps run and became the first driver since 2010 to clinch the championship before the season finale.

Elliott and father Bill are only the fifth father-son duo to win NASCAR national series championships. They are members of an elite group that includes Lee and Richard Petty, Ned and Dale Jarrett, David and Larry Pearson, and Dale Earnhardt Sr. and Dale Earnhardt Jr. Bill Elliott, the 1988 Sprint Cup Series champion, will be enshrined into the NASCAR Hall of Fame tomorrow evening.

“So many people have been behind me, and the first thing I want to do is thank them,” said Chase Elliott, who will run the full 2015 XFINITY Series schedule as the defending champion. “My parents especially have believed in me every step of the way, and I know this wouldn’t be possible without all the sacrifices they’ve made to focus on my racing career. This is such a big week for our family.

“I’m also extremely grateful to Mr. Hendrick and my teammates at both Hendrick Motorsports and JR Motorsports for believing in me. NAPA has been a huge supporter, and I’m honored to represent them on and off the track. Of course the fans have been amazing to me, and I’m so appreciative of that. I know how rare this opportunity is and will work as hard as I can to make everyone proud.”

NAPA (www.NAPAonline.com) was founded in 1925 to meet America’s growing need for an auto parts distribution system. Today NAPA has grown to more than 6,000 NAPA AUTO PARTS stores, 62 distribution centers with more than 400,000 part numbers in inventory and more than 15,000 NAPA AutoCare and AutoCare Collision Centers nationwide.