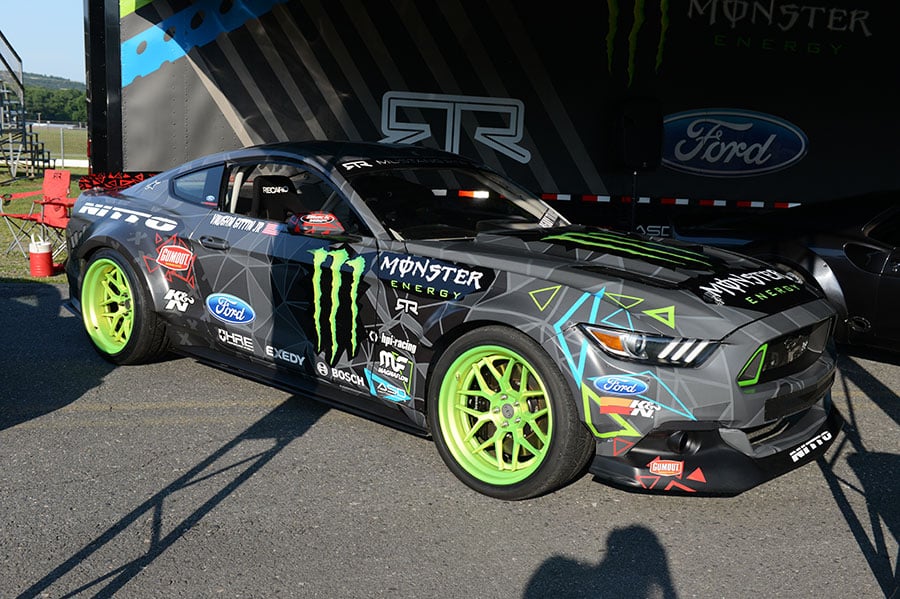 MALVERN, PA – On August 15th, AmericanMuscle, a leader in aftermarket Ford Mustang parts, hosted its 7th Annual AmericanMuscle Car Show at Maple Grove Raceway in Mohnton, PA. AM2015 hosted over 3,000 Mustang, attracting in more than 10,000 spectators, ultimately raising $55,000 for Make-A-Wish®. The largest Mustang-only car show, AM2015 held a mix of exciting events and played host to an assortment of automotive celebrities, all the while benefitting charity!

At the Bama Performance Dyno challenge, several built Mustangs went onto the rollers to see who could lay down the most power. Ultimately, AM customer Adam A. and his Procharged Foxbody laid down an astronomical 1,161 RWHP at the tire, nabbing him the victory. The BBK Revving contest showcased an assortment of modified Mustangs with the best of the best exhaust systems. For a half-hour, multiple generations of Mustangs revved their engines to see who had the loudest of them all, with the winner being chosen by crowd applause.

The Roush Burnout competition drew out some tire shredding monsters who were eager to make clouds of creamy white tire smoke. Roasting his tires and smoking out the burnout box with the best burnout was AM customer Kyle O. and his 2006 Mustang GT. Riding on the excitement of the burnout contest was a series of Exhibition Races courtesy of Vogtland. The Bama Performance Cobra ran a 10.8 @ 133 MPH against the Bama GT500 which went 11.1@ 133 MPH. The Bama Performance 2015 GT made a record setting pass down the 1⁄4-mile going 9.4 @ 146 MPH, making it the fastest 2015 in the world. The races were rounded out with a pass by an insane jet-engine powered car, which made put down a time of 5.7 @ 280 MPH!

A hallmark of the AmericanMuscle Car Show has always been charity, and this year’s show went further than ever. The proceeds of the show benefitted Make-A-Wish®, which totaled in at a $55,000- our largest amount raised to date; however, the charity didn’t stop there! 18 year old Mustang enthusiast Jonathan Mullins of Portage, MI wished for the AmericanMuscle Team to turn his 2000 V6 into his dream car. As soon as AmericanMuscle heard about Jonathan’s wish, the team sprang into action. After spending hours talking to AM designers creating a sketch of his dream ‘Stang, the wheels were put into motion and the car started coming together. At the show, Jonathan’s Mustang was unveiled to him and the rest of the show’s attendees for the first time, leaving Jonathan absolutely speechless!

“In its seventh year of existence, we’re proud to report that – in every way – the 2015 AmericanMuscle Car Show was the largest and most exciting we’ve ever hosted,” said Steve Voudouris, founder, President and Chief Executive Officer of Turn 5, Inc. “Through our continued focus on giving back to the community and our relationship with Make-a-Wish, we’ve changed a young man’s life forever. Our team did an amazing job working with Johnathan to make his wish come true. When we pulled the cover off of his Mustang, his reaction and gratitude made our team’s effort more than worthwhile.”

Throughout the day, enthusiasts had the opportunity to meet and greet some of the biggest names in the automotive world. Steve Saleen was in attendance along with his new beast of an S550, the S302 Black Label 2015 Mustang. Professional drifter Vaughn Gittin Jr. was set up with his RTR display, showcasing a mix of his Mustangs from his RTR drift car to his coyote swapped 1969 Mustang RTR-X. Hot rodding legend and visionary Chip Foose was talking with fans and signing autographs all day, all the way up until the MMD by Foose giveaway.

In May, entries to own the MMD by Foose 2015 Mustang opened up after the car was unveiled in Chip Foose’s California studio. Featuring a mix of brand new MMD by Foose parts and a Bama Performance Supercharger Kit (powered by a 2.9L Whipple), the one-of-a-kind 2015 Mustang found a new owner, as it was given away by Chip Foose himself at AM2015 to Brad Brallier of New Horizons, PA.

Once again the show proved to be a huge success and a lot of fun, drawing the largest crowd to date and raising a lot of money for charity in the process. Be sure to join AmericanMuscle for next year’s show, as it hopes to become even larger and have even more Mustangs than this year’s show!

Starting out in 2003, AmericanMuscle quickly rose to be one of the leading aftermarket Mustang parts providers in the business. Catering to the needs of late-model Mustang owners and enthusiasts, AmericanMuscle provides the most desirable parts at the best prices. Located just outside of Philadelphia, AmericanMuscle is dedicated to offering the Mustang community with the highest quality of parts and service.

Founded in 1998, Foose Design is an automotive and product development company directed by legendary designer and fabricator Chip Foose. Headquartered in Huntington Beach, Calif., the company specializes in illustration, graphics, ideation model making, surfacing and the complete construction of automobiles and automobile-related products, including its unique line of Foose Design wheels. Its products and creative services are available to private individuals, television and film companies and automotive manufacturers. Visit the company Web site at http://www.chipfoose.com for more information.

Make-A-Wish grants the wishes of children with life-threatening medical conditions to enrich the human experience with hope, strength and joy. According to a 2011 U.S. study of wish impact, most health professionals surveyed believe a wish-come-true has positive impacts on the health of children. Kids say wishes give them renewed strength to fight their illness, and their parents say these experiences help strengthen the entire family. Headquartered in Phoenix, Make-A-Wish is one of the world’s leading children’s charities, serving children in every community in the United States and its territories. With the help of generous donors and more than 27,000 volunteers, Make-A-Wish grants a wish somewhere in the country every 37 minutes. It has granted more than 254,000 wishes since its inception in 1980; more than 14,200 in 2014 alone.

AmericanMuscle Car Show Photos from AM2015

AmericanMuscle Car Show Videos from AM2015