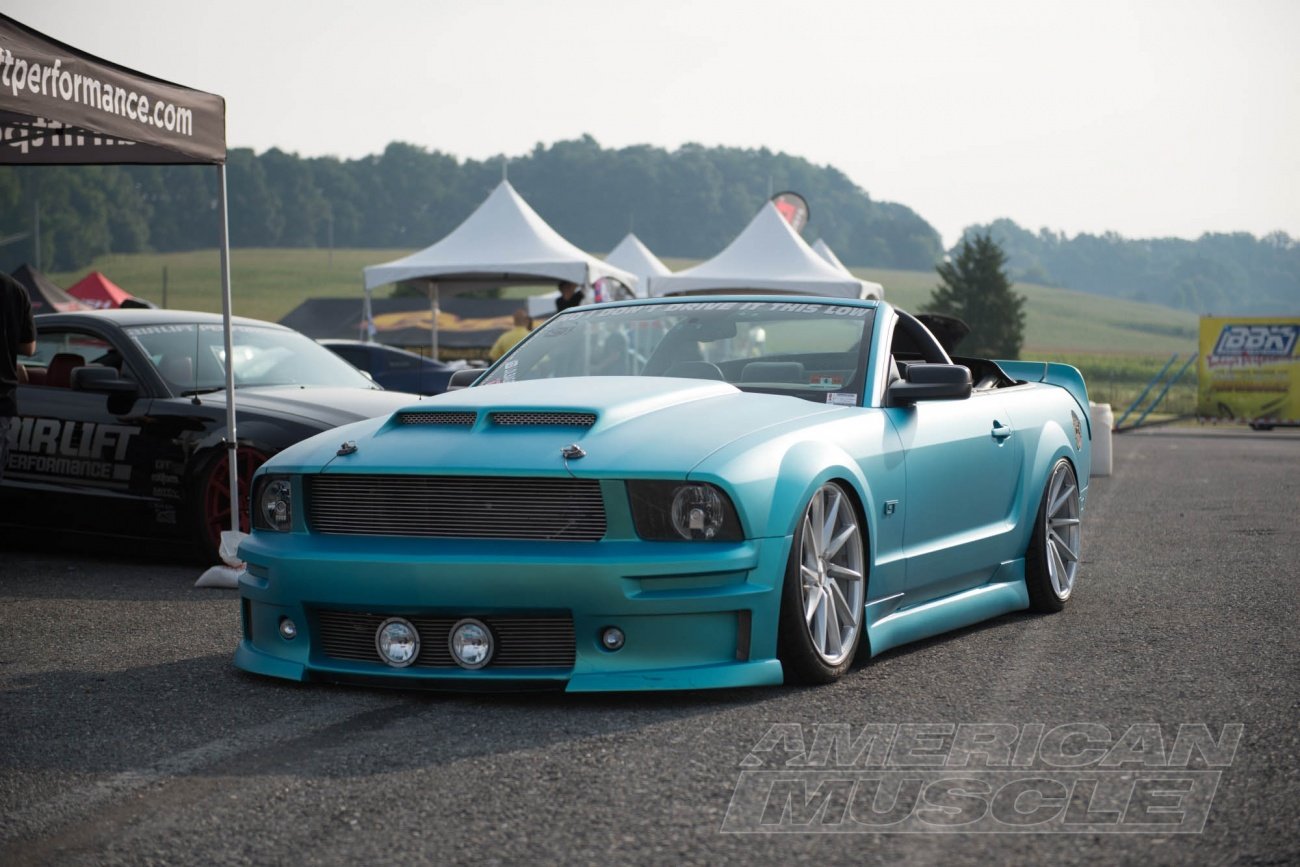 MALVERN, PA (August 26th, 2014) – AmericanMuscle held their annual car show on August 16th, 2014 in Mohnton, Pa
at Maple Grove Raceway. This was the first year the show was held at Maple Grove and allowed a far greater number
of Mustangs and spectators to enjoy the show. Brett “Big Schwag” Wagner, host of the show “Pass Time” was one of
the hosts of the show, MCing different events. 2,600 Mustangs converged at Maple Grove to make it one of the
largest Mustang Events in the country, with 10,000+ spectators at the event. $35,503.02 was raised for the Special
Olympics, with $4,300 of that donation coming from the Red Mustang Registry.

Hot Rod legend Chip Foose was as the AmericanMuscle Car Show signing autographs and meeting fans. He signed
autographs all day and even after the show ended. To make it an even more memorable moment, Chip Foose gave
away Project MMD to Zachary Villareal of Alice, Texas. Project MMD was last year’s SEMA vehicle that was worth
$70,000 with all of the upgrades done to the 2014 Mustang GT.

There was a Roush Burnout contest, a BBK revving competition and a Bama Performance Dyno Contest that ran
throughout the day. The Roush Burnout Contest produced a lot of white smoke and shredded rubber, with a push rod
5.0L swapped New Edge Drift Car winning the contest. The BBK revving contest brought challengers from Fox Bodies
to 2014 S197’s. The dominating sound of the 4 valve coyote engine with a full exhaust system took first place. The
Bama Performance Dyno contest saw some modded Mustangs Putting down power from the low 600 HP range to the
winner, a 2014 Turbo GT, putting down 926 RWHP.

Revelation Studios gave out free AmericanMuscle Tattoos all day long at the show. The Tattoos incorporated the
AmericanMuscle Brand with car parts to truly embody the Mustang experience. After the awards ceremony and all of
the $20,000+ in prizes were handed out, Mustang owners were able to drag race at the show for a heavily discounted
price. By far this was the biggest and best AmericanMuscle show to date; from the Sponsors and vendors, to the
Mustangs, spectators, and special guests, it was truly a memorable show.

-Vaughn Gittin Jr. returned to sign autographs, meet fans and reveal his 2015 RTR Mustang for the first time to
the public
– Chip Foose gave away our SEMA car Project MMD to Zachary Villareal of Alice, Texas
– “Pass Time” Host Brett “Big Schwag” Wagner was one of the car show’s hosts
– 2,600 Mustangs came, 10,000+ Spectators attended
– $35,503.02 was raised and donated to the Special Olympics
– Over $20,000 worth of prizes where given away
– A burnout contest, revving contest, and dyno competition showed off some of the best Mustangs
– Best in class awards were presented to each generation of Mustang, with Chip Foose and Vaughn Gittin Jr.
awarding their Best in Show Pick
– Free AmericanMuscle themed tattoos were done at the show all day long