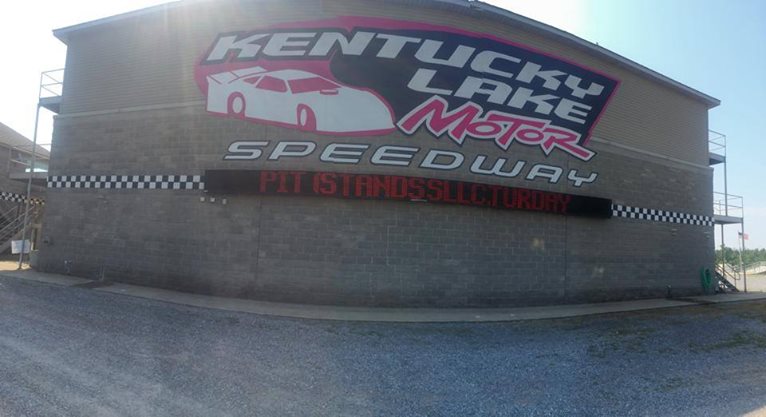 Eminent domain claims Kentucky Lake Motor Speedway land forcing track to end 2015 season early. The land has been claimed for a new highway project. Half of the pit lane has been condemned leaving track owners the track and tower.

Land on the backside of track is considered wetland area by the state. That means the track cannot use it to extend their pitlane area. This leaves them with a track but no pit lane for teams. Below is the official press release from the Kentucky Lake Motor Speedway management staff.

CALVERT CITY, Kentucky – Clover Leaf Realty, LLC has announced that it will cease operations at Kentucky Lake Motor Speedway in Marshall County and end its season early, effective immediately. In 2014, the Commonwealth of Kentucky gave notice that its reconstruction of the I-24/Purchase Parkway Interchange for the I-69 corridor would take much of the real property used to operate the racetrack. After communicating with state officials, the Kentucky Transportation Cabinet filed a condemnation lawsuit in Marshall Circuit Court to take the racetrack property by eminent domain in July.

The lawsuit has cast a cloud over the 2015 race season and future of the facility. On Monday, September 21, the Court granted the Commonwealth’s motion for an interlocutor order to take the land. The approximately 36 acres being taken encompasses the racetrack’s pit area, maintenance building, ticket office and scales, rendering the racetrack’s utilities inoperable. This prompted the racetrack owners to make the hard decision to close the racetrack and end the season early. “We did the best we could, but the state’s taking of our property has really left us with very few options,” said co-owner, Ronnie Jones.

Hopkinsville businessmen, Ronnie Jones and Jim Hale, purchased the racetrack in 2013 with the stated intention of working hard and making it a great track again. KLMS was slated to end the season with a reprisal of the Commonwealth Cup headlined by the NeSmith Chevrolet Dirt Late Model Series on October 23rd and 24th. Also lost was an appearance by the United States Auto Club Aimsoil National Sprint cars scheduled for October 17th. “Our employees, fans and sponsors have been great, and we want to thank them for everything,” said co-owner, Jim Hale.

The points championship fund will still be paid in all weekly divisions. However, a decision on the number of races required was yet to be made at the time of this release. KLMS officials will announce the final decision for the championships in the coming weeks. More information can be found at kylakespeedway.com