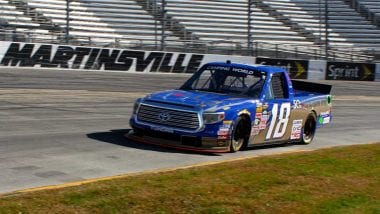 Kenseth, the 22-year-old son of Sprint Cup Series regular Matt Kenseth, is scheduled to drive the Hattori Racing Enterprises No. 18 Toyota later this month in theKroger 200. The Shigeaki Hattori-owned team, which will attempt to make just its second truck series start, will be under the direction of veteran general manager Pat Tryson.

Should Kenseth qualify for the 32-truck field, the event will mark just his second NASCAR national series start. Kenseth posted a sixth-place finish in his XFINITYSeries debut at Chicagoland Speedway in June.

“Shige and I have tried to put something together for a long time and finally all of the pieces fell into place,” said Kenseth, who met with media Tuesday as he put the No. 18 through its paces at Martinsville. “I’m thankful to him for this opportunity and am looking forward to working hard to make our debut a successful one in a couple of weeks.”

North Wilkesboro Speedway set to return from the grave

NASCAR driver wakes up to millions in crypto wallet