KNOXVILLE, Tenn. (Nov. 24, 2015) – Pilot Flying J, the largest operator of travel centers in North America, announced today via a team member event at their Knoxville headquarters that they have signed on to be the title sponsor of the Battle at Bristol – an iconic college football game to be held on Saturday, September 10, 2016 at Bristol Motor Speedway. The historic racetrack will host a border battle between the Virginia Tech Hokies and Tennessee Volunteers and is expected to shatter the existing college football attendance record.

This sponsorship represents a monumental company initiative for Pilot Flying J. From securing naming rights for the game – Pilot Flying J Battle at Bristol – to using this pinnacle event as a catalyst to further engage employees, customers and consumers nationwide via multiple events, this opportunity will look to further position the company as a destination of choice in the travel center industry. Adding to the excitement, ESPN/ABC is confirmed as the broadcast partner of the Pilot Flying J Battle at Bristol, with time and final network to be determined at a later date.

“We likely wouldn’t be sitting here today if I had not been given the opportunity to play college football for the Tennessee Volunteers. That experience had a significant impact on my life, teaching me valuable life lessons that provided me with the foundation to be a successful businessman,” said Jim Haslam II, founder and chairman, Pilot Flying J. “We could not be more excited as a company to be part of college football history next September. Throughout the year, we will seek opportunities to engage our Pilot Flying J team members and customers to join in and celebrate this tremendous partnership.”

The Pilot Flying J Battle at Bristol brings together neighboring states of Virginia and Tennessee that have deep and storied roots for the company. From Jim Haslam’s playing days for the 1951 Tennessee Volunteers national championship football team, to the first Pilot filling station opening in Gate City, Virginia in 1958 – a mere 30 miles from Bristol Motor Speedway, the Pilot Flying J Battle at Bristol will serve as the proverbial middle ground to showcase the company within college football and at an iconic venue.

Following Bristol Motor Speedway’s legendary Night Race on August 20, 2016, the venue will be transformed into the world’s largest football stadium for the inaugural Pilot Flying J Battle at Bristol game. With a projected attendance of 150,000, the event is expected to crush the previous college football attendance record, which currently stands at 115,109. 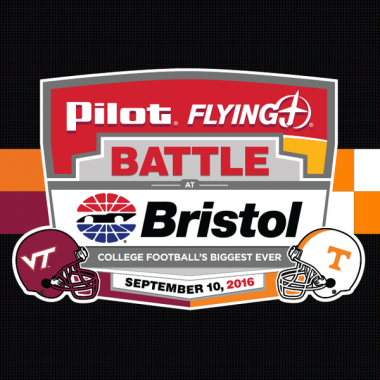 “All eyes in the sports world will be on the Pilot Flying J Battle at Bristol next September and we’re thrilled to have a national sponsor by our side who embodies the welcoming spirit of our Blue Ridge and Smoky Mountain region,” said Jerry Caldwell, executive vice president and general manager of Bristol Motor Speedway. “We’ll have Vol and Hokie nation fans from nearly every state at the game, so having a partner who shares our focus on making guests feel at home is important to us.

“It’s also fitting that Pilot Flying J’s founder, Jim Haslam, was on a national championship football team. He took the lessons of discipline and determination that he learned on the field and applied them in business to create one of the top 10 private companies in the nation. With his visionary leadership and Pilot flying J’s commitment to excellence, the Battle at Bristol will be a world-class event.”

The combined network of more than 650 retail locations across North America serves more than 1.3 million customers daily. To learn more, visit pilotflyingj.com or follow Pilot Flying J on Facebook at Facebook.com/pilottravelcenters or on Twitter – @PilotTravel. To learn more about the Pilot Flying J Battle at Bristol, visit bristolmotorspeedway.com/battleatbristol, and join the social conversation using #BattleatBristol.

Nestled in the mountains of northeast Tennessee near the Virginia state line, Bristol Motor Speedway is a 0.533-mile concrete oval race track with 28-degree corner banking, 650-feet straightaways and a 40-foot wide racing surface. Renowned as “The World’s Fastest Half-Mile,” the short track features two races each year from the NASCAR Sprint Cup Series and NASCAR XFINITY Series, one Monster Truck event and one NASCAR Camping World Truck Series, NASCAR Whelen Modified Tour and NASCAR K&N Pro Series-East race. With a crowd capacity in excess of 150,000, the facility expects to set a new NCAA college football attendance record on Sept. 10, 2016 when the racetrack transforms into a football stadium and plays host to border rivals, the University of Tennessee and Virginia Tech. The speedway property is also home to Bristol Dragway. The historic drag strip celebrates its 50th anniversary, headlines with the NHRA Thunder Valley Nationals and operates more than 70 event days each season. The Bristol Chapter of Speedway Children’s Charities, a 501(c)(3) nonprofit organization, awarded a record-breaking $805,000 to regional children’s charities in rural Tennessee and Virginia in Nov. 2015, bringing their eighteen-year total to nearly $10 million in grants awarded. In existence since 1961, Bristol Motor Speedway and Dragway was purchased in 1996 by Speedway Motorsports, Inc. a publicly traded company that is a leading marketer and promoter of motorsports entertainment in the United States. For more information, visit the company’s website at bristolmotorspeedway.com.