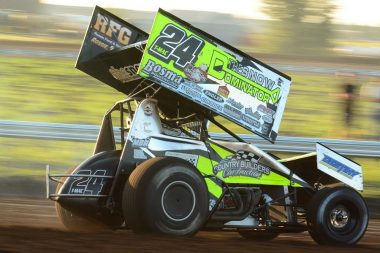 The $20,000 to win Front Row Challenge will again be a part of the schedule. One of the biggest events in all of sprint car racing will take place at the Southern Iowa Speedway in Oskaloosa, Iowa on Monday, August 8. A trio of “Dirt Classic” events presented by Kasey Kahne are on the schedule as well. On May 6, the “Dirt Classic” at I-80 Speedway will pay $10,000 to the winner. Two non-point September events in Pennsylvania including a $20,000 to win event at Lincoln Speedway are a part of the schedule as well.

Knoxville Raceway in Iowa will host a total of ten events. Highlighting the shows at the “Sprint Car Capital of the World” will be a big two-day show over the Fourth of July weekend featuring Fireworks on Saturday, July 2. Jackson Motorplex in Minnesota will also play host to multiple NSL events on Friday nights. In addition to the Jackson Nationals, the revamped speed plant will be the site of the Folkens Brothers Trucking Spring Nationals on May 13, and the Jackson County Fair race on July 29.

Other return venues for the NSL include their season opener at 34 Raceway in West Burlington, Iowa on April 9, and the St. Francois County Raceway near Farmington, Missouri on May 27. At the conclusion of the season, the NSL will be part of the track’s traditional Queen’s Royale as well, September 30 and October 1. The series also returns to the Iowa State Fair Speedway in Des Moines on May 29 and the Hancock County Speedway near Britt, Iowa on July 31.

New tracks for the 2016 National Sprint League Schedule include Mason City Motor Speedway in Mason City, Iowa on June 19, the Clay County Fair Speedway in Spencer, Iowa on September 16 and US36 Raceway near Cameron, Missouri on September 17. The latter two shows will be co-sanctioned with the World of Outlaws. A total of four shows will be co-sanctioned with the WoO. Jackson Motorplex and Cedar Lake Speedway near New Richmond, Wisconsin will also host both series.