2016 WeatherTech Racing drivers have been announced. The Porsche GT3 drivers will compete in the IMSA WeatherTech SportsCar Championship. 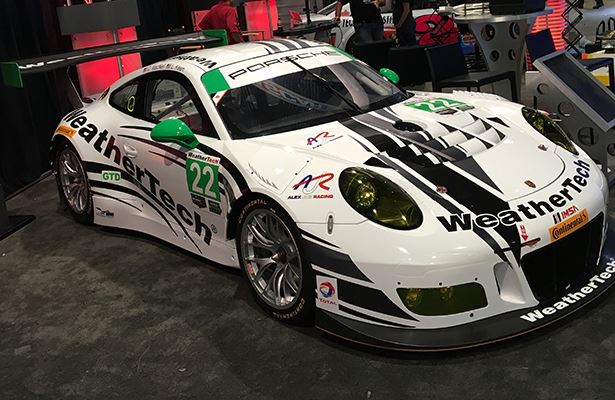 The team recently put the first miles on the all-new Porsche 911 GT3 R race car at Sebring. MacNeil (Hinsdale, Ill), MacNeil (Hinsdale, Ill), Keen (Charleston, S.C.) and new comer to the Alex Job Racing family Gunnar Jeannette (Salt Lake City, Ut) all put in time behind the wheel of the black and white Porsche. Van Gisbergen (Auckland, New Zealand) was not on hand at Sebring. In addition to Jeanette joining the team for the 24, founder and CEO of WeatherTech, David MacNeil will also run in the twice around the clock classic in January.

“This will be my first time officially driving for AJR, but I’ve known Alex a long time and he was actually involved with my first run at Le Mans back in 2000,” Jeannette said. “The new Porsche 991 GT3 R is a pretty awesome piece. I think the last Porsche I raced professionally was actually all the way back in 2007, so it’s pretty apparent that things have moved along a good bit since then. From what Cooper and Leh have said this car is a quantum leap ahead of what they’ve been driving the last few years. I think this is also the first time I’ve ever been the shortest driver on a team at 6’1. It makes the seat situation really easy! I’m looking forward to working with these guys with their huge amount of Porsche experience to get me up to speed quickly for the 24. I am really excited to be a part of the WeatherTech family.”

David MacNeil is ready to put some time in behind the wheel at Daytona.

“I’ve watched my son Cooper compete over the last eight years, while I pursued vintage and competed in national SCCA events,” David MacNeil said. “This new Porsche with the paddle shift and great downforce is easier to drive than many of my vintage cars. Much like Rob and Chris Dyson I wanted to race with my son. I’ve had a lot of laps around Daytona in several different Porsches, so I am looking forward to putting in a stint behind the wheel of the new car next month.”

Cooper MacNeil likes the drivability of the new car.

“The new Porsche is really fun to drive,” MacNeil said. “The new 911 has improved in nearly every aspect from the car we raced the last two years. It is most noticeable here at Sebring in the high-speed turns like one and 17. The aero advance with the rear diffusor and larger rear wing makes the car easier to drive. We are looking forward to the Roar test next month to see how it behaves at Daytona.”

Leh Keen likes the evolution of the Porsche.

“The new Porsche is a huge step forward from the car we have been racing,” Keen said. “The added downforce really helps the stability. The car has ran flawlessly throughout our test. We are really happy with it. For me as a driver and having spent most of my career in a Porsche, it’s great to get behind the wheel of Porsche’s latest and greatest 911 race car. Can’t wait to race it next month!”

Alex Job, team owner, has the team working up to the season opener in 45 days.

“It is nice to have everything set in mid-December,” Job said. “We are bringing Gunnar on board and that is nice addition to the driver line-up for the longer events. Shane will join us at the Roar and for the 24, so we have some good continuity. Leh and Cooper will go the season and David is going to jump in the car at Daytona for a run. We received the new Porsche a week ago and we were able to get it ready and break the seal for two days of testing at Sebring this past week. Our first impressions are very positive of the new car and we are looking forward to the 2016 IMSA WeatherTech SportsCar Championship.”

The IMSA WeatherTech SportsCar Championship for 2016 will take to the track for the Roar Before the 24, Jan. 9-11 and then lineup for the 50th running of the Rolex 24 Hour At Daytona Jan. 29-31.

The IMSA WeatherTech SportsCar Championship GTD (GT Daytona) Class is made up of some the world’s most sophisticated cars, including the Porsche 911 GT3 R, Ferrari 488, Lamborghini Huracan, Aston Martin, BMW M6, Viper SRT and Audi R8. All GTD Class cars run on the spec Continental tire.