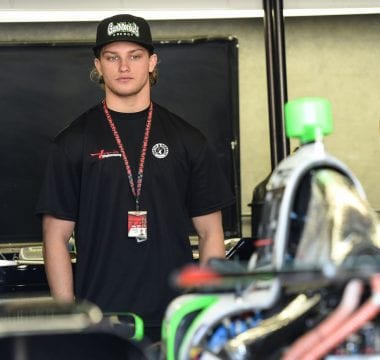 The youngest driver, at age 21, in the 100th Indianapolis 500 Mile Race has been watching from the sidelines for the past nine months following a crash while leading the race at Pocono in August.

It has been long and sometimes frustrated nine months that took time to rethink his racing plan while working out hard for another opportunity and assisting his father, Jody, as a high school wrestling coach. Sage has met with counselors, built his body into its best shape ever and recharged his batteries for another strong performance in 2016.

Karam’s former team owner Dennis Reinbold came to Sage in December with a game plan for the 100th Indy 500. Karam didn’t have a solid program yet for 2016 and Reinbold’s plan with a new and exciting primary sponsor in Gas Monkey Energy gave Sage a shot to win the 100thrunning of the “Greatest Spectacle in Racing.”

“I was helping my dad with his wrestling team and working out hard,” said Karam, who’ll start 23rdSunday in the No. 24 Gas Monkey Energy Chevrolet for Dreyer & Reinbold – Kingdom Racing. “Then Dennis called and said he had a great new sponsor and he wanted me in the No. 24 for the 500. I was very exciting for several reasons. First, I was happy to be driving for Dennis’ team again. We had a great run in 2014, my rookie year. We came from 31st to ninth and I won the ‘Hard Charger Award.’

“Secondly, I was a big fan of the Gas Monkey Garage and it’s ‘Fast N Loud’ show on the Discovery Channel. I have been watching the show for several years and thought it was very cool. I was extremely excited to work with Richard Rawlings and his guys at Gas Monkey. So I just couldn’t wait to get into the Gas Monkey Energy machine at IMS.”

But Karam had to wait his turn. He had done some promotional work for Gas Monkey Energy and the Indy 500 but he was chomping at the bit to get into the Chevy-powered IndyCar. Then he had to wait through the Grand Prix of Indianapolis weekend too.

“I kept busy that weekend as I worked on the IndyCar Radio Network for the Indy Lights and IndyCar races,” Karam explained. “We did some media interviews and I had pit stop practice with the crew. I knew the time was getting close to jumping back into the driver’s seat.”

On May 16, Karam returned to track for the first time since the August crash at Pocono. The smile on Sage’s face said it all that day. He was back in the cockpit and doing what he loves – driving a race car.

“It was a great feeling and, after a few laps, it felt like I did last August in the race car,” he said. “It was a blast. I love coming to Indy for the 500 and I enjoy working with the Dreyer & Reinbold – Kingdom Racing guys. We had a good week of practice and we learned a lot about the race car.”

Karam completed 384 laps during the first week of action at the legendary 2.5-mile oval and, following a strong final practice, the Nazareth, Pa., racer has regained his confidence behind the wheel.

“We didn’t qualify (23rd) as well as I had hoped,” admits Sage. “But the car felt great in the final practice sessionMonday with almost 100 laps (93) and I felt I could drive the car in various spots on the track in hotter conditions. It’s exciting to jump out of your race car after strong performance in the last practice.”

Karam will take the No. 24 Gas Monkey Energy Chevrolet to the track Friday in the annual CARB Day one-hour practice round in final preparation forSunday’s 100th edition of the world’s biggest auto race. In addition, Sage and his crew will participate in the popular Pit Stop Challenge featuring the top pit crews in head-to-head battle in the pit lane.

“We finished second in the Pit Stop Challenge with this team in 2014,” said Karam. “This team is fast on pit stops and I need to hit my marks on Friday in the Challenge and, most importantly, in Sunday’s race. I think we can run to the front in the Indy 500. It’s feels awesome to be back in the car and racing again.”

Sunday’s 100th Indy 500 will be televised nationally on ABC-TV with the green flag set to drop at12:14 p.m. EDT.  A sellout crowd will be on hand to witness history in the 200-lap classic.

And Karam hopes to make more history by becoming the youngest winner in Indy 500 history.