And we have a fight! 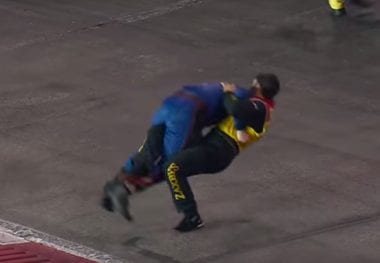 This was the 2nd time the two drivers tangled in the event. Just a few laps earlier in the race they also made contact. The result of the first incident landed John Wes Townley in the wall while Gallagher continued on.

This two met again just laps later. This time the result was both cars parked against the outside retaining wall. As tow trucks were working to pull the trucks apart, the two drivers had time to discuss the incident.

Apparently, the NASCAR Campiong World Truck drivers couldn’t come to a mutual agreement on what happened. John Wes Townley then ran down the banking and attacked Spencer Gallagher. With speed Townley applied a WWE takedown as officials stepped back to watch the show. Gallagher then rose to his feet and applied a take down of his own.

Townley then head locked Gallagher as. Townley then exited the WWE strategy and began throwing punches. Spencer Gallagher didn’t throw any punches of his own but he was able to block several.

A handful of punches were landed by John Wes Townley. However, at this point fatigue began to set in. The two decided to walk away and call it a night.

No knockout punches were thrown. John Wes Townley was awarded the winner on a decision. The stats guy (Joe) in the Fox Sports 1 booth has it scored 8-2.