The two were battling at the Surfers Paradise Street Circuit when suddenly Fabian Coulthard was going backwards, down the straight away.

Fabian Coulthard says, “I have every right to run GT (Garth Tander) to the wall.” He continued, “For GT it’s a little bit embarrassing really. Really pretty much turning right into me, when he had a hell of a lot of room on the left hand side. To you know, not to do that. For someone with that level of experience and that caliper of driver, I expect a little bit more.”

Garth Tander took most the blame as the drivers reviewed the crash on the same stage, days later.

I didn’t realize how much room I had on the left of my car before the concrete wall. 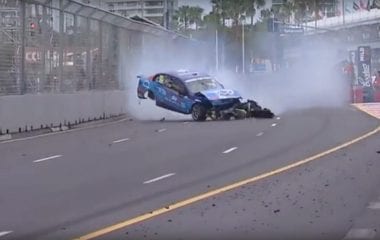 “I was so focused on what Fabian was doing with his car, that I didn’t realize how much room I had on the left of my car before the concrete wall.” He expressed a bit of an apology to the team and driver, “I hate seeing cars turned around like that. I hate seeing damage like that. [I hate] the fact that those guys had to work all night to get his car repaired to run again tomorrow. So look, certainly there was some fault on my side. I just hate how this has played out.”

Fabian Coulthard did repair his car for the event at the same circuit, the next day. He finished 15th.

Garth Tander was handed 10 grid spot penalty with DSO Jason Bargwanna for the race the next day. The team chose not to protest that penalty for the Castrol Gold Coast 600.

Here you can see the drivers reviewing the crash on the same stage: Video