Marcos Ambrose retires from racing and will not return to the wheel. The driver will not pilot a V8 Supercar in the 2016 racing season, Roger Penske has revealed. Marcos Ambrose recently opted out of a full-time drive. Ambrose met with Penske at Pukekohe to discuss his future with the team and his future in the sport itself.

Penske confirmed to Speedcafe.com that Marcos Ambrose has decided against his offered role as a co-driver. He did confirm that Ambrose is likely to remain involved as a commercial ambassador. The declined offer by the 39-year-old spells a Marcos Ambrose retirement. In March, Ambrose pulled out of a full-time drive with DJRTP. That was just two events into his long awaited comeback from NASCAR.

I don’t think that he doesn’t want to do it (drive), but he’s at a stage at his career where he wants to be with his family and work with his dad,” Penske said.

“I’ve talked to Marcos and he has made a decision that if he’s not the primary driver he doesn’t really want to be a co-driver,” Penske told Speedcafe.com.

“I respect him for that. He reminds me of Rick Mears when he came to me, won Indianapolis four times for us and then said ‘at this point I just don’t have it in my gut to go as hard as you have to. Marcos didn’t say that to me, but he said ‘look, I’ve come back, put my foot in the water and it’s probably not what I want to do on a going forward basis’.

“I think from a driving perspective he won’t be in a car, but hopefully he will work with us on the commercial side. He’d still come to certain key races to support us. He likes some of the commercial aspects of our business, so hopefully we can tie something together there. We haven’t done that yet, but it’s something we’re interested in.” 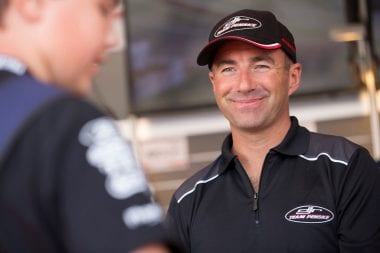 When asked if he was personally disappointed that Ambrose will no longer be driving, Penske stressed that he understands the Tasmanian’s desire to spend time with family after nine years in NASCAR.

“He’s been away, he’s home now and I think that’s weighing heavily on him. It’s a personal decision.

“For us, we had to go through the same learning curve in 2015 whether it was Marcos or the top driver in the series that was already competing.

“We had to go through these early stages and it’s been good for us because we’ve learned a lot. I feel very good about the progress that the team is making.”

PREV POST
Pepsi Max Back to the Future V8 Supercar