The Donald Trump NASCAR Sprint Cup car will take to the track this weekend. It’s entered for competition at Texas Motor Speedway. See more photos of the Trump NASCAR racecar below, there’s a video as well.

Election day is fast approaching. Donald Trump want’s NASCAR fans to know that he supports their sport. The Donald Trump campaign has covered many wraps in the racing ranks in the previous months. 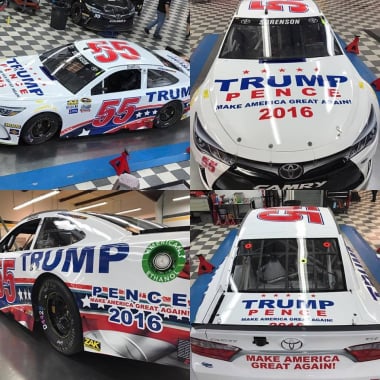 Reed Sorenson will be the driver of the Trump Racecar. He’s entered 25 races in the 2016 NASCAR season. He’s netted an average finish of 33.9.

Texas Motor Speedway will be a double duty weekend for NASCAR driver Reed Sorenson. He will also compete in the NASCAR Camping World Truck Series event.

That truck, shown below is the #49 Silverado. The truck has yet to sign a sponsor for the event.

Trump opponent, Hillary Clinton hasn’t sponsored any racecars to our best knowledge. Trump has been spotted on NASCAR teams as well as local dirt racing drivers. Though some of those have been pro-bono efforts by the NASCAR teams. It’s un-known if this one is coming as an official marketing effort from the Trump Campaign or not.

See more photos of the Donald Trump NASCAR Racecar below.

Here’s when the NASCAR Trump Car will be on Track