The Donald Trump Dirt Late Model Racecar will hit the track this weekend in Ohio. View the Trump Dirt Racecar photo album from Eldora Speedway below. 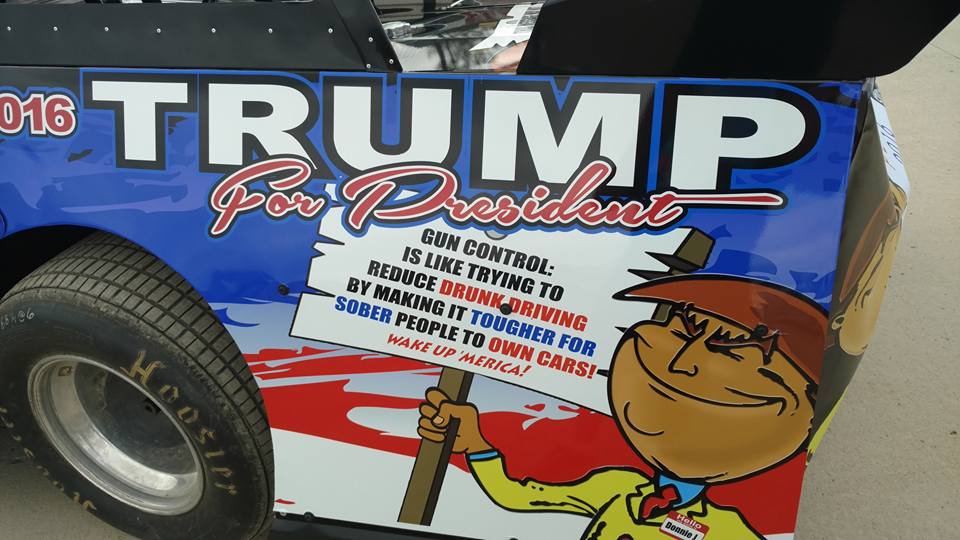 The #91 Trump/Pence Dirt Late Model is entered for competition in one of the crown jewels of dirt racing. The World 100 hosted at Tony Stewart’s Eldora Speedway will feature the Trump car.

The Donald Trump dirt car is filled with entertaining lines. The door is a graphic version of Donald Trump holding sign slogans. “Voting for Clinton because you don’t want me … is like eating a dog turd because you hate broccoli.” However, possibly the best line on the car is on the rear spoiler. As seen mostly by dirt track competitors, it reads…

Bump My Car.. There Will Be Hell Toupeé

What is the World 100? It’s is a 3 day event in Ohio with massive payouts to dirt track drivers who make the show. It also brings a massive attendance of racing fans who enjoy the taste of dirt in their beer.

Donald Trump was in Ohio yesterday and now he’s sponsoring a dirt racecar at the biggest dirt track in Ohio. The wrap was also a last minute application for Rusty Schlenk Racing.

2016 World 100 car! After 3 long, sleepless nights and help from a lot of friends we got it done!!!! Thanks Buckeye Concrete and Warpaint graphics for the last minute help!!!

This is not the first time Presidential runner Donald Trump has sponsored a race car. It’s not even the first time he’s sponsored a car at Eldora Speedway. He previously sponsored a NASCAR Camping World truck machine which was entered in the Mudsummer Classic. He also sponsored a Dirt Sprint Car in 2015’s Knoxville Nationals event.

Since carved from a cornfield in the natural amphitheater that existed between the Eldora Ballroom and the Wabash River by bandleader Earl Baltes in 1954, Eldora Speedway has grown to be a frontrunner in motorsports growth and stability.

The complete schedule for Eldora’s 63rd consecutive season, including ticket and campsite information, is available at www.EldoraSpeedway.com and can be requested by phone at (937) 338-3815.