The Trump NASCAR Truck is coming to Talladega SuperSpeedway on October 22nd. The Trump-Pence Truck will be driven by NASCAR Camping World Truck Series driver Austin Wayne Self. View the photo of the Trump Truck below.

Self, a native of the great state of Texas, along with his AM Racing NASCAR truck team, plan to unveil their red, white and blue No.22 ‘Trump-Pence, Make American Great Again’ tribute truck at the upcoming NASCAR Camping World Truck Series – Fred’s Pharmacy 250 event at Talladega Superspeedway on October 22.

The Talladega race date which falls three weeks before the United States presidential election of 2016, provides a timelystage to show support. 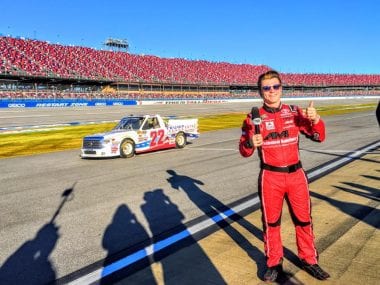 Austin Wayne Self, NASCAR driver and part of the millennial generation, knows the importance of exercising his privilege to vote in the upcoming November presidential election.

“This will be the first presidential election I’ve been old enough to take part in,” says 20-year old driver, Austin Wayne Self.  “Politics has never really been that important to me until now – but now more than ever we need change.  Trump and his values are in line with my beliefs.  I’m a big supporter of his business background and believe his experience is what this country has been waiting for. I’m really excited to show my support”.

Proud to carry the Trump-Pence endorsement on the side of his truck at Talladega, Self realizes the importance of this election.

Trump is a guy that I can really stand behind – he’s here to make American great again.

“It’s important we carry this message and remind everyone, especially my peers, to get out and be heard come Election Day.  I think it’s cool we have someone running for president who doesn’t necessarily come from the political world.  Trump is a guy that I can really stand behind – he’s here to make American great again.” 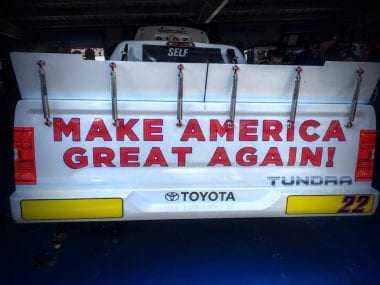 The state of Texas, home of both Self and his primary partner AM Racing, has a strong reputation for its historical support of the Republican Party.

“We have to get God back into our lives and rebuild our Country on a foundation of Godly values,” stated AM Racing’s team owner, Tim Self.  “Trump’s actions indicate that he will push public policy in that direction.  Jerry Falwell Jr, Franklin Graham and our good friend Dr. James Dobson have faith in Trump. He is our guy. Hopefully, the Trump Pence Truck will make a small difference. It represents our family and friends doing our part.”

News of AM Racing’s Trump-Pence presidential ticket support has garnished high marks in their home state of Texas.  As proud partner of the Texas Department of Agriculture’s GO TEXAN agri-business program, AM Racing received kudos from the commissioner of Agriculture. 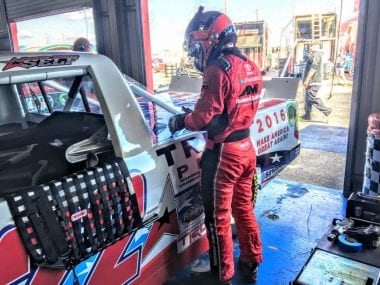 “I’m proud to see that AM Racing is doing their part to get out the vote for Donald Trump by running their Trump/Pence truck at Talladega Superspeedway on October 22,” said Sid Miller, Commissioner of the Texas Department of Agriculture. “As one of Mr. Trump’s key advisors in Texas I am confident he can win and bring back jobs to America.  He will make free trade into fair trade and that means a lot for the Texas agriculture industry and jobs across the country.  AM Racing and Donald Trump: both are Making America Great Again!”

This message was paid for by AM Racing and is not endorsed by the Republican Party or the Donald J. Trump-Mike Pence Presidential campaign. The NCWTS – Fred’s Pharmacy 250 from Talladega Superspeedway will air live on FOX SPORTS 1 (FS1) at 1:00pm Saturday October 22, 2016.  FS1 will also cover same day qualifying at 10:30 am.  Expanded coverage of two practice sessions will air Friday October 21 at 1:00 pm and 3:00 pm.  All time Eastern Standard Time.