Donald Trump Gets Endorsement From NASCAR CEO and Drivers 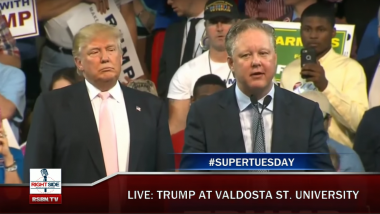 Donald Trump gets endorsement from NASCAR CEO, current drivers and NASCAR legend. Watch the video below.

“I am proud to receive the endorsement of such an iconic brand and a quality person such as Brian [France],” Trump said in a statement. “Brian has a wonderful family and is an incredibly successful business person. I have great respect for Brian and I am grateful for his support and that of Bill Elliott, one of the best drivers in history, and active stock car racers, including his son Chase Elliott, Ryan Newman, and David Lee Regan.”

Brian France explained his endorsement of Trump by saying, “Mr. Trump is changing American politics forever and his leadership and strength are desperately needed. He has had an incredible career and achieved tremendous success. This is what we need for our country.”

Ryan Newman and David Regan were also in attendance at the stand.

Meanwhile, the Camping World Truck Series CEO isn’t happy about this endorsement. They sponsor the NASCAR Camping World Truck Series. Marcus Lemonis demanded last year that if the NASCAR awards ceremony was hosted at a Trump property, as originally planned, then he would not be in attendance. NASCAR made the decision to move the ceremony per the title sponsors request.

Marcus Lemonis made a statement via twitter: “There is no place for politics/any political endorsements in any business. Your customers and employees should have their own mind. #period”

Donald Trump Gets Endorsement From NASCAR CEO and Drivers VIDEO