Menezes warmed up for the main event with a commanding triumph in a one-off appearance for Jackie Chan DC Racing in the Asian Le Mans Series curtain-raiser at Zhuhai a week earlier alongside Ho-Pin Tung, sending the talented young Santa Monica, California native into the 6 Hours of Shanghai – the penultimate outing on the 2016 WEC calendar – with his tail up.

The N°36 Signatech-Alpine trio arrived holding a 35-point advantage over their nearest pursuers in the chase for the prestigious FIA Endurance Trophy for LMP2 Drivers, but vowing to maintain the same calm and methodical approach that has served them well all season.

At the scene of the team’s maiden WEC victory 12 months earlier, Menezes and Lapierre duly placed the 550bhp Alpine A460 prototype second on the starting grid amongst the 10 high-calibre LMP2 class protagonists during a tense and tight qualifying session. 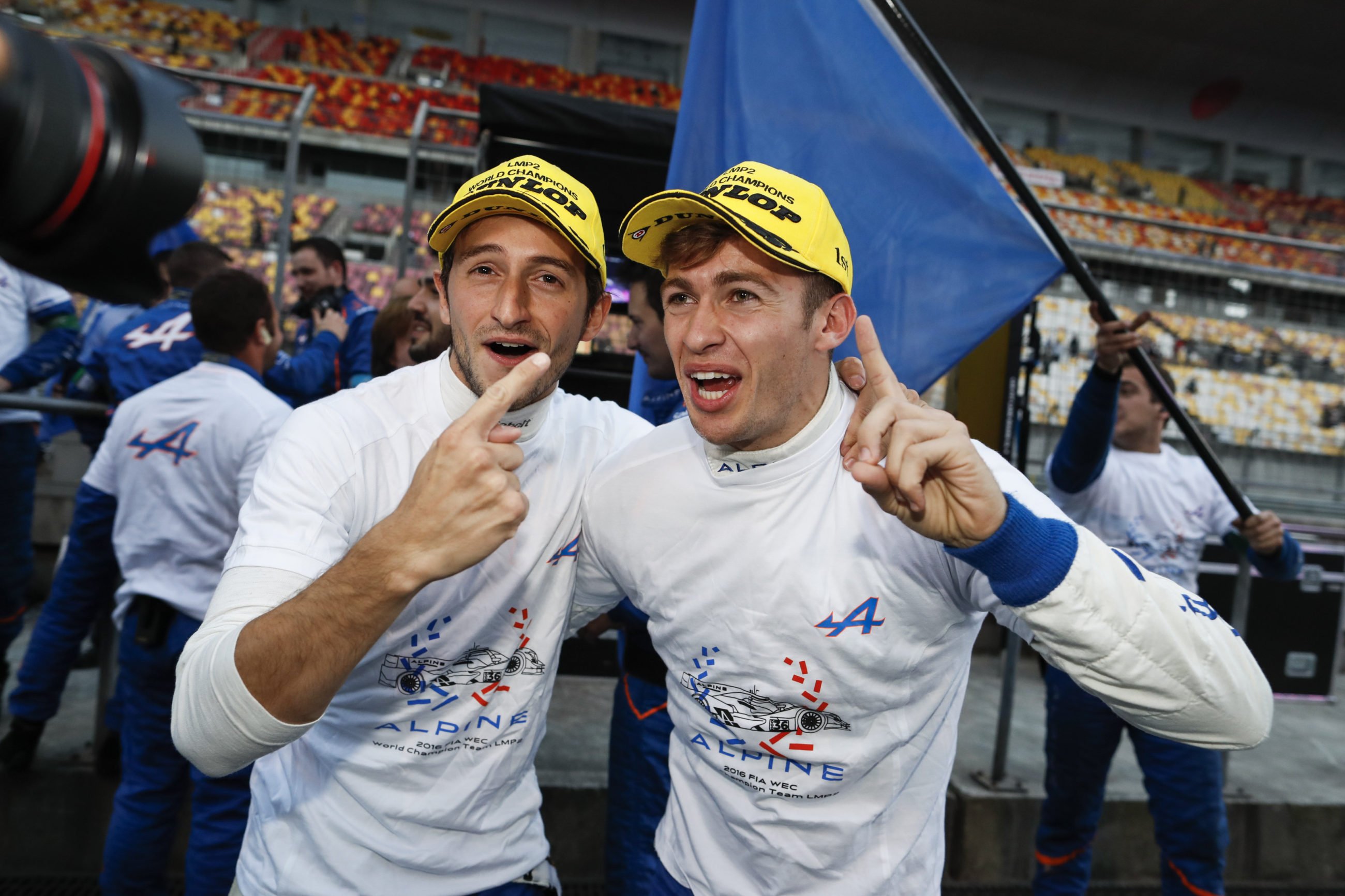 Their stellar effort was all-the-more impressive given that the Williams-Harfield Sports Group protégé set his lap time on the less favourable harder-compound rubber, after high tyre wear during free practice convinced Signatech-Alpine to adopt a more cautious strategy in light of what was at stake.

In front of some 55,000 enthusiastic spectators at Shanghai International Circuit on race day, Lapierre snatched the lead early on before conceding the top spot to Alex Brundle as he judiciously looked after his medium-compound tyres in the hot conditions. The experienced sportscar ace subsequently survived an off-track excursion precipitated by an incident with a lapped car, before Menezes took over behind the wheel.

The 22-year-old battled valiantly on the harder-compound boots and was running in third position when he was tagged into a spin at mid-distance by title rival Bruno Senna, for which the RGR Sport by Morand driver was administered a drive-through penalty. Thankfully, Menezes was able to rejoin with no significant damage, and following a double stint for Richelmi, Lapierre returned to the cockpit for the final stages.

Closing onto the back of third-placed Filipe Albuquerque but knowing that fourth would be sufficient to seal the championship spoils, he wisely elected not to launch an attack and remained right in his adversary’s slipstream all the way to the chequered flag. As the Frenchman crossed the finish line to cap a mature and measured performance, the Signatech-Alpine pit wall erupted into rapturous applause and celebrations.

The result wrapped up both the Drivers’ and Teams’ laurels before the end of what has been an exceptional campaign in endurance racing’s premier and most fiercely-disputed global series, with a phenomenal four victories and two podiums from eight starts to-date. It also secured Menezes a coveted spot in the sport’s history books, and as he reflected upon a truly unforgettable weekend, the former Jim Russell Driver Scholarship Award winner was quick to pay tribute to a first-class display by all involved.

“It’s been a very special season – the greatest of my career,” he acknowledged. “To be the first American to win an FIA World Championship in three-and-a-half decades is a magical feeling and pretty crazy to think about, to be honest – and to do it in a year when I also won the Le Mans 24 Hours at my first attempt is even more incredible!

“There aren’t too many world champions out there, and now I’m one of them. It really doesn’t get much better than that, and I think it will take a while to fully sink in. Nobody can take this achievement away from us. The entire team has done an amazing job throughout the year to give us a competitive and reliable car at every circuit and to execute some inspired strategies, and this reward is for all of them – I’m immensely proud of all the guys and girls at Signatech-Alpine.

“We knew we would stand a decent chance of winning the title in Shanghai, but then saying that and actually getting it done are obviously two completely different things. We took a gamble on tyre choice ahead of qualifying, and whilst Nico and I managed to put the N°36 second on the grid, it was immediately apparent that the race was going to be a different prospect altogether given the disparity in pace between the two compounds.

“It was worth a shot because on paper, it was the right way to go considering the degradation levels in practice, but it failed to pay off and during my stint in the race, I was really just doing my best to keep the car on the track while giving away as little time as possible to our competitors. That was quite a struggle, especially on a full fuel load.

“Nico, Stéphane and the whole team did a great job to maximise our performance, which was proven by the fact that we were firmly in the fight all the way to the end. It was a pretty nail-biting finish; we had great pace and would have loved to have celebrated our success on the podium, but at the same time, we knew fourth place was good enough with our main rivals only just ahead in third, so it was a question of focussing on the bigger picture and not taking any unnecessary risks.

“Nico is an absolute pro and knew exactly what he was doing, and words can’t adequately describe the sheer release of emotion when he crossed the line. Now the pressure is off, we can go into the final round in Bahrain in a fortnight and sign off the season in style. It’s time to go out there, have some fun and really kick butt!”

NEXT POST
FIA blowover crash, aerodynamics lifted the car off the ground into backflip (VIDEO)