Some of the very first Gateway Dirt photos are posted below.

I was at the Edwards Jones Dome all day today as the staff puts the final prep work into the racing surface. This weekend, will probably be the biggest dirt track race of the year. You’re seeing the first images of the brand new track. 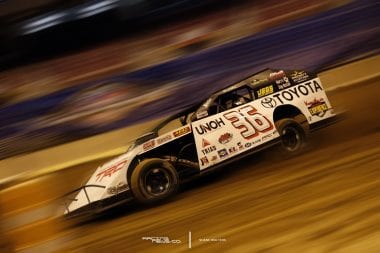 Watch: Cars on Track for the First Time at the Gateway Dirt Nationals

You’ll have to forgive the poor lighting. Operators of The Dome building have yet to turn on all the lights for the Gateway Dirt crew. These yellow lights are just the track setup lights. They haven’t yet turned on the main power switch. When the rest of the lights on turned on come Thursday, the yellow hue will disappear.

Side-by-side action will be fantastic this weekend. Kevin Gundaker and the Gateway Dirt Nationals have really put in the effort to bring the drivers and fans a fantastic show.

The Gateway Dirt track is ready for racing.