As soon as the engines shut off, Kenny Wallace had a flow of tips for Kevin Gundaker. Kevin Gundaker has been working the track all week. 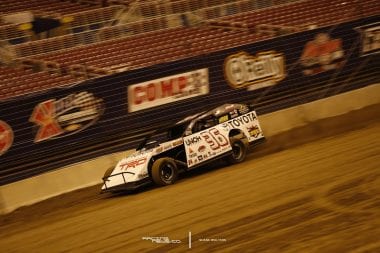 Kenny Wallace had a lot of positive things to say about the Gateway Dirt Nationals surface, “I was surprisingly shocked. How fast we were up to speed.”

The track test was very useful to the event staff. The track had a low spot on the straight away. A slope that appeared un-visible to the human eye. But when you fly over that spot in a racecar you can feel bumps before you can see them. The crew is going to go to work and fix that spot of the track before the pit gates open on Wednesday.

Kenny Wallace also shared several others bits of info on the track shape and construction. He suggested to Kevin Gundaker that dirt be added all the way around the track wall. Building up a 6 inch wall of dirt before you reach the edge of the racing surface and the wall behind it.

The track test shown in the Gateway Dirt video below was a final attempt to perfect the track surface before the racing begins on Thursday. Kenny Wallace was happy to share information with drivers coming to the event. Even going so far as to let the dirt modified drivers what gear they should be running.

Kenny Wallace has tips for drivers coming to the Gateway Dirt Nationals, “We have a .735 gear in it. I went high on purpose and what I found is it’s faster up there. Longer radius but it’s good out there. ”

Kenny has a ‘less throttle’ suggestion for racers, “My biggest suggestion to everybody is. That time I got to wide open. Just a little bit. Just to see if I could do it. It’s not necessary to be wide open. But that time I was able to do that and get better forward bite up off the corner.”

He continued, “Then at the end. I slowed up just like we would do at any bull ring and tracks got a lot of grip in it. This is the dirt that they use for the motocross races. It was voted the best dirt of all of motocross racing. This dirt has been sifted a lot. I holds moisture. This dirt reminds me of (Belleville, IL) Belle-Clair Speedway.”

I was a racing fan well before I was a media member. As a lifelong dirt track racing fan it was one of the most exciting things I’ve seen. All those emotions and it was just two cars on track, a test session. I truely cannot wait for Thursday, 20 cars being 10 times as exciting.