You wanna know what you’re going to see this weekend? This little bullring race track is about to blow both your socks off. You will be very surprised. In fact, you should already be marching your ass to the ticket window.

I was one of the lucky few to witness the track test in person last night. I’m more excited to witness this dirt race than any dirt race I’ve ever been to. I’ve been to a lot of dirt races! I feel truly blessed this race happens to be in my own hometown. It has all the possibilities of becoming the best show of the year.

The videos shown from the ‘on-track test’ really don’t do this track any justice. Videos rarely do race tracks any justice, but especially in this case. 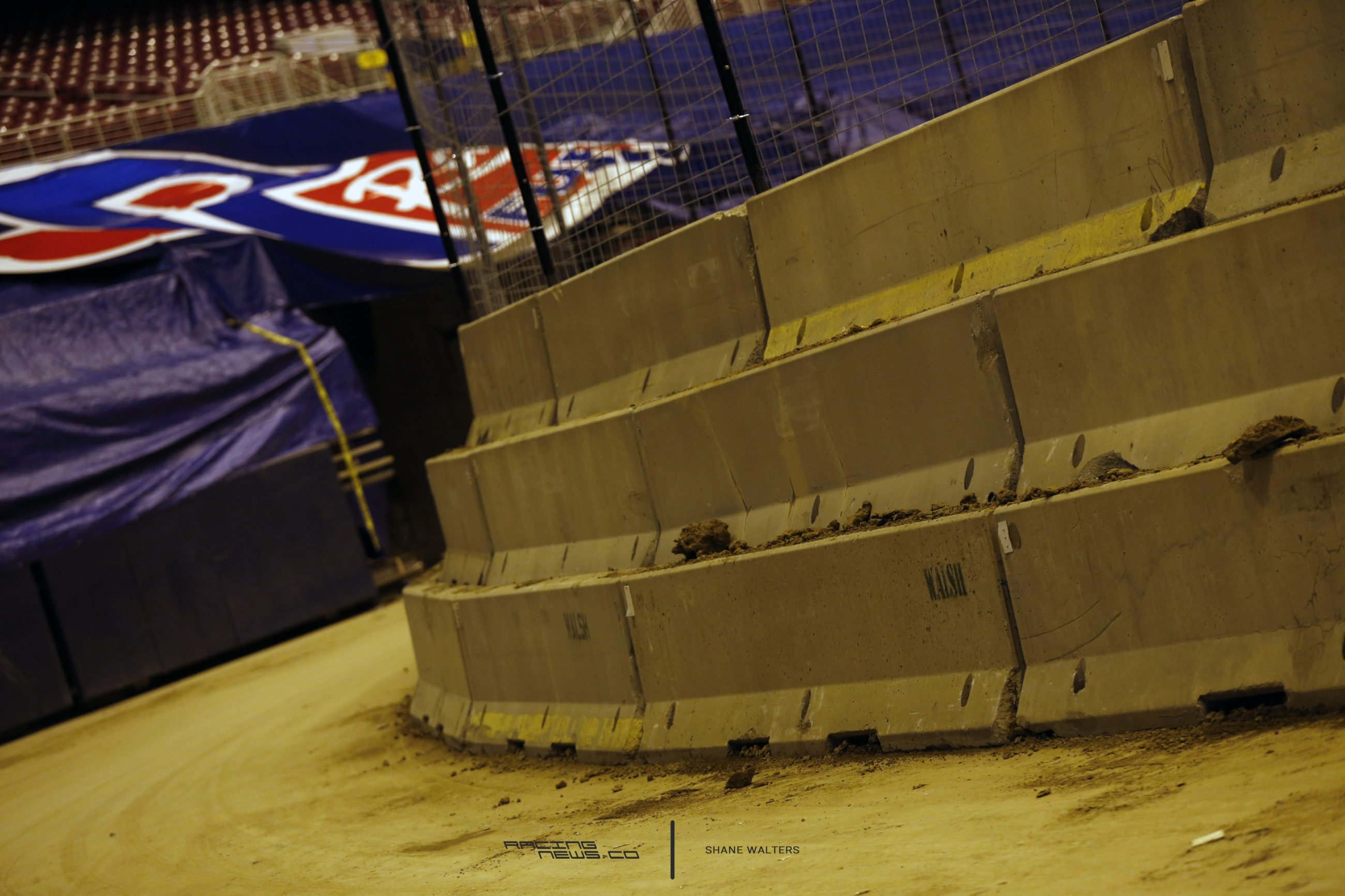 The Gateway Dirt Nationals track surface has a lot of banking for a “flat” track. The photos below show the drastic banking applied. The middle of the track is bare concrete floor. While the corners stand well over my head. It’s about 8″ of banking from the track limits to the track infield.

This little dirt track at The Dome in St. Louis is about to put on one the best dirt racing shows in the entire country. The track might be small but it’s fast. Bullring racing at it’s finest.

Track prep was done by the pro’s. Kevin Gundaker and the Tri-City Speedway staff have been working on the surface every day for over a week now.

The effort is already showing signs of reward. Last night Kenny Wallace and Kevin Gundaker preformed a track test at the Gateway Dirt Nationals. It was the first time a dirt modified and dirt late model were seen on the new dirt oval.

I was surprisingly shocked. How fast we were up to speed. 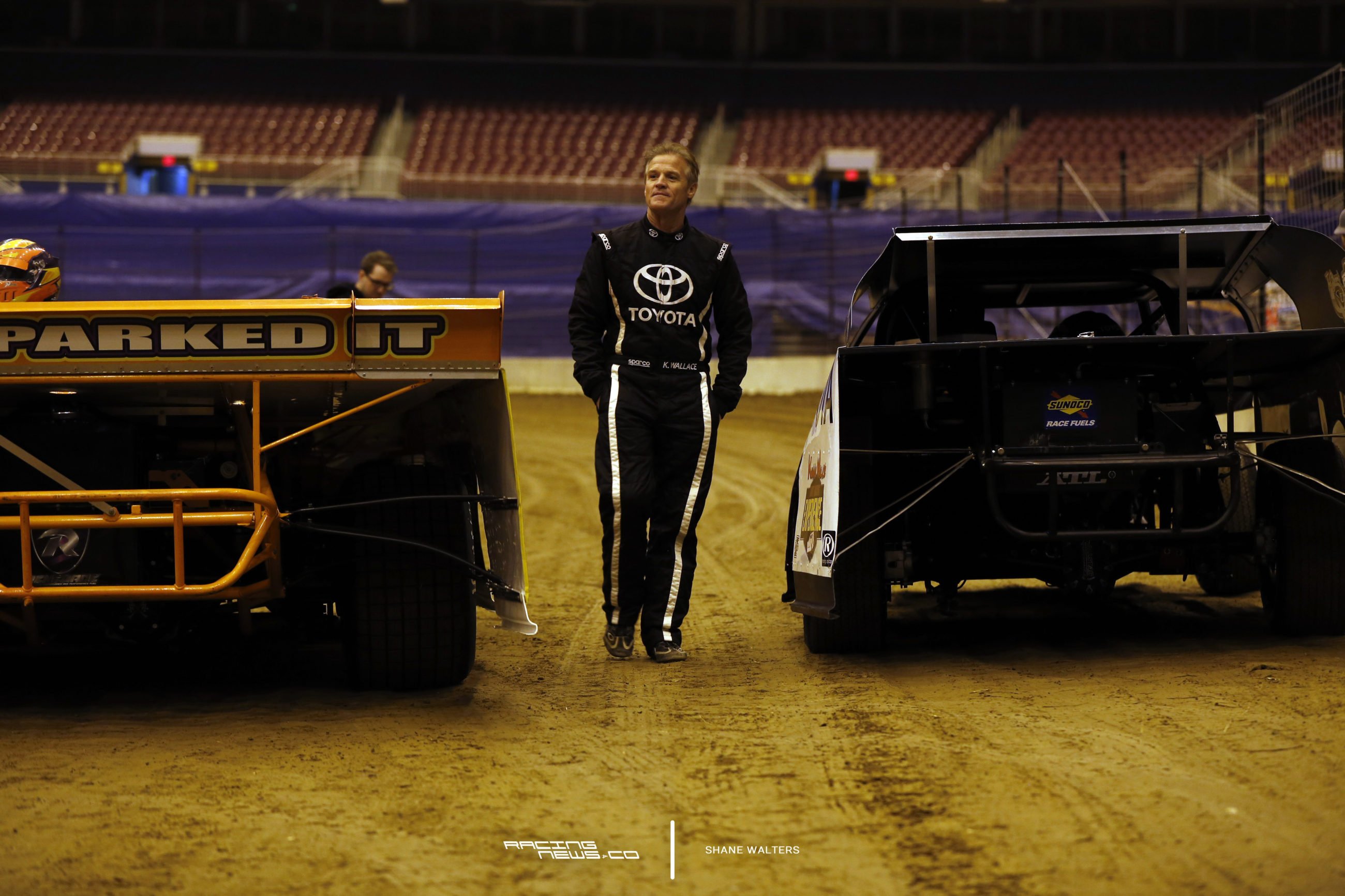 Kenny Wallace exited the car last night extremely surprised at how quickly the track was race ready for racing. Kenny Wallace spoke on the track surface soon after the engine shut off.Before he even climbed from his car he was bragging about the race track, “I was surprisingly shocked. How fast we were up to speed.”

You can watch the ‘Gateway Dirt Nationals track test’ video here. Also, photos from the track test can be seen here.

Kenny talks about the Gateway dirt surface, “Then at the end [of the run]. I slowed up just like we would do at any bull ring and tracks got a lot of grip in it. This is the dirt that they use for the motocross races. It was voted the best dirt of all of motocross racing. This dirt has been sifted a lot. I holds moisture. This dirt reminds me of (Belleville, IL) Belle-Clair Speedway.”

Kenny had a lot more to say on the track. He even had a few suggestions to Kevin Gundaker on how to make it even better. He also offered tips for dirt racers coming to the event. You can watch the in-car interview from last night here. 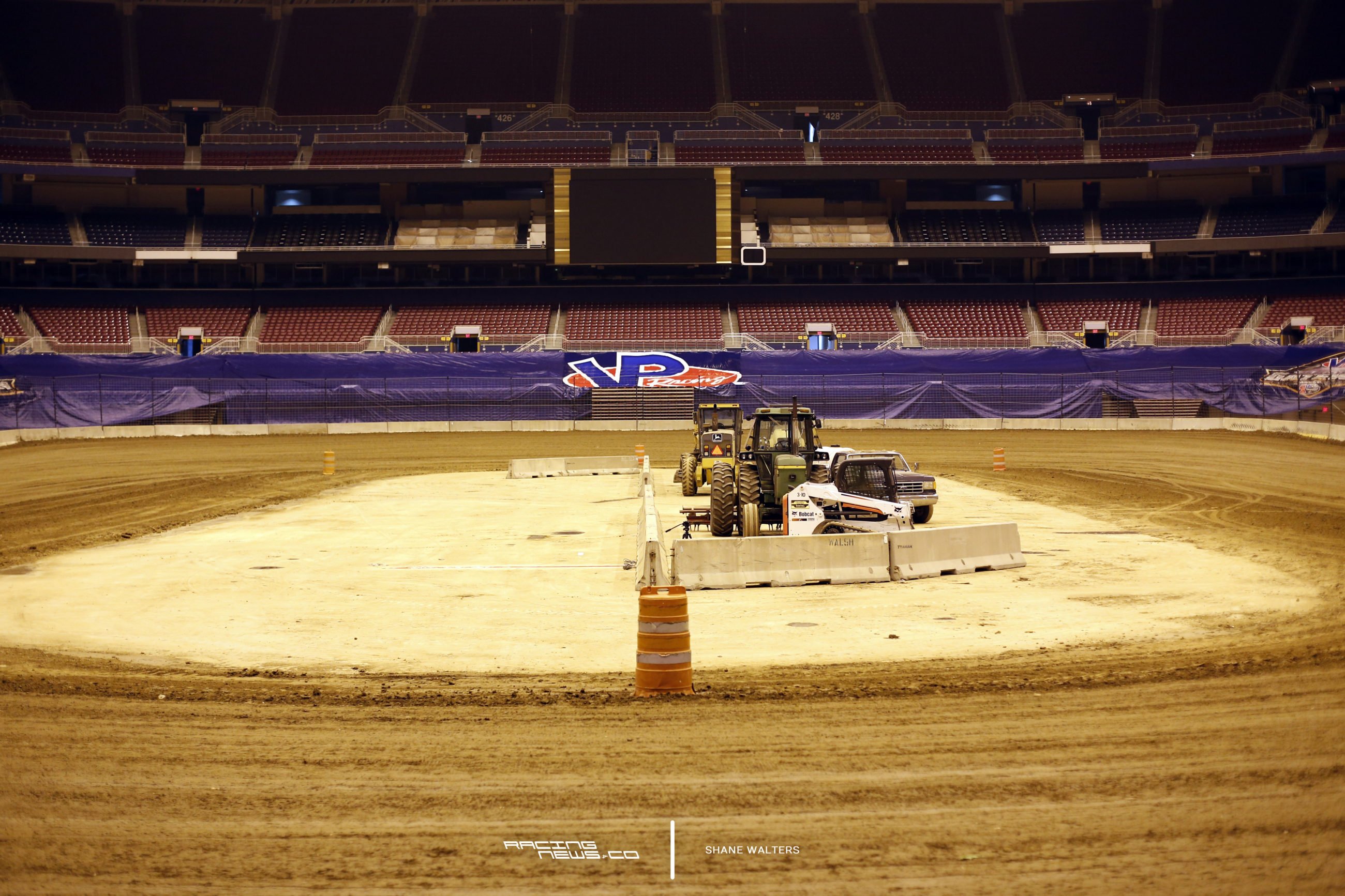 The dirt is special. So special that it was rated the #1 dirt in supercross racing. And it was noticeable. The Gateway Dirt track has an amazing amount of grip. Right out of the gate, the track is fast.

Fans will be impressed. If you thought a little 1/5 mile track would be slow or if you thought it’s too small for racing. Then, you’re likely just a hater and but in this case you’re also an ‘incorrect’ hater. You will have a different opinion when you visit the track this weekend.

It’s small, it’s fast and it’s racy. If you’re coming to the show this weekend, you should be very excited.

You can view the Gateway Dirt Nationals event schedule for this weekends event here.

We’re based in St. Louis so you bet we’re covering everything for this event. You can view the full archive of Gateway Dirt Nationals news coverage here.

The Gateway Dirt Nationals event takes place this weekend at the Edward Jones Dome in downtown St. Louis, Missouri. To get tickets to The Dome Dirt Race visit GatewayDirt.com