The Gateway Dirt track is nearly ready for the huge weekend of racing ahead. View the videos below as the Gateway Dirt Nationals staff puts the final touches on the dirt track at The Dome.

Event promoter Cody Summer offered an update on the progress and the event. “Really excited! And a lot of people out there online are getting excited as well”

In regards to the track progress, “We are in the process of wrapping up those final little tweaks to the racing surface and to the fence. We have a lot of people still in the building doing a lot of the final things. We have out last little bit of dirt being brought into the building this morning and this afternoon.” 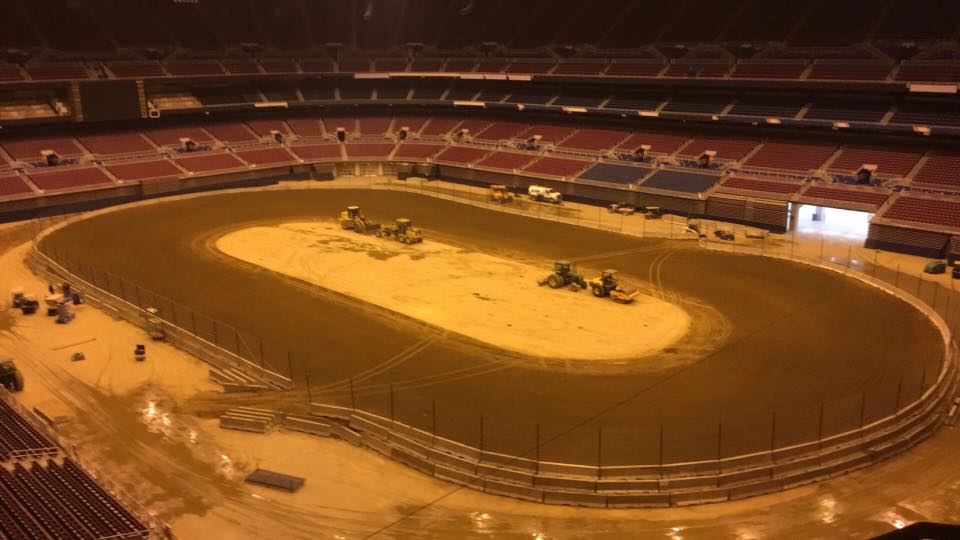 The Gateway Dirt Nationals hopes to have a car on track today to test out the brand new racing surface. Sommer stated, “Our real hope is to have an actual real dirt late model on the track as early as tomorrow afternoon (Tuesday). So really excited and looking forward to that and giving a report on how the tracks holding up.”

That’s a very good call. A brand new dirt track surface can be a touchy thing. You’re never certain a dirt track will react to changing conditions and cars on track, in the way you think it will. Putting a car on track today will give you a better idea of what challenges are coming their way all weekend. It should help them form a more specific plan for maintenance throughout the weekend.

All signs are pointing a very successful event. We’d love to have you here in St. Louis attending the event.

For those of you who can’t make the show at The Dome. DirtonDirt is offering LIVE dirt racing video coverage throughout the historic weekend.

View the Gateway Dirt Nationals track prep videos below as the staff puts the final touches on the racing surface.