Larry Shaw Has Built A Lot of Race Cars

January 2, 2017 – Larry Shaw Race Cars began as a hobby more than 40 years ago. The chassis builder has grown it into an empire for Larry Shaw and wife Cheryl. 5,000 race cars later, the Batesville, Arkansas natives are reflecting on their dirt racing careers and looking forward to giving back to the community.

“Back in 1973 the ball got rolling when Mark Martin’s dad, Julian came to me and wanted me to help build Mark a race car,” recollects Shaw. “We sat down and figured out exactly what they wanted out of a car, and we got to work on it.”

Mark raced for the first time in 1974, and it was clear that he was a natural. The future NASCAR Hall of Fame racer, won several races in his first season of competition and even claimed the Arkansas State Championship. 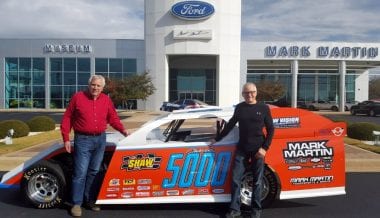 Larry worked with Mark until he moved onto the NASCAR ranks.

With his career set in motion, Mark began to avidly race, while Larry Shaw tried his hand at a few different things.

“In 1978 we moved to Michigan, where I went to work at a machine shop that built race engines,” recounts Shaw. “It was a good job, but we decided that the Michigan winters were just too cold for our family, so we moved back home pretty quick.

“With all of the connections I made with dirt track and asphalt short track jobs, Cheryl and I thought we would just move back home, get jobs and I might build a couple of cars just as a hobby.”

With a laugh Shaw concludes by noting, “Needless to say, I have never got a job – life has been really great!”

History was made on October 10, 1979 when Larry, his wife Cheryl, and young sons Kevin and Kirk (only young boys at the time), formed Larry Shaw Race Cars.

“Back then I felt like we had a really good foundation and concept to build race-winning cars, but I’ll be honest that I never would’ve dreamed that we would’ve enjoyed this much success,” Shaw says with his signature smile. 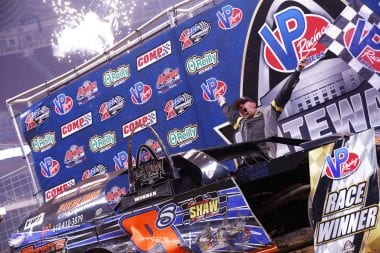 Customers of Larry Shaw Race Cars have won just about every coveted event that Late Model and Modified racing have to offer. In the Late Model ranks the company boasts triumphs in such races as the World 100, the Topless 100, and the Dirt Track World Championships. Modified accolades include the Alltel 100 title as well as recent triumphs in the highly-coveted IMCA Super Nationals, the WISSOTA 100, UMP Fall Nationals and recently the Gateway Dirt Nationals.

“When we first started building cars, I thought that 100 would be a lot to build and that 1,000 would really be something,” notes Shaw. “To now have built over 5,000 is something that I’m so very proud of.”

Now everything has come full circle back to Mark Martin, who is the owner of the 5000th Larry Shaw Race Car. Mark and his wife Arlene have started a foundation that has a focus of helping children and families.

Larry Shaw and Larry Shaw Race Cars are proud to help the Martin family with their great foundation. In fact, a portion of the t-shirt sales for the 5000th car is being donated to the foundation.

Larry, Cheryl, Kevin, and Kirk Shaw would like to take this time to say a very special thanks to everyone, who has been a part of making Larry Shaw Race Cars successful through the years.

Gordy Gundaker wins at the track his father built