The Kyle Larson 2017 car will feature Credit One Bank on the #42 Chip Ganassi Racing machine. The company will serve as the primary sponsor for multiple races.

Credit One Bank, one of the largest and fastest growing credit card issuers in the United States, is expanding its relationship with Chip Ganassi Racing (CGR) by partnering with Kyle Larson and the No. 42 team during the inaugural Monster Energy NASCAR Cup Series (MENCS) season, beginning with The Clash at Daytona, which is Feb. 18 at 8 PM ET, airing live on FS1. 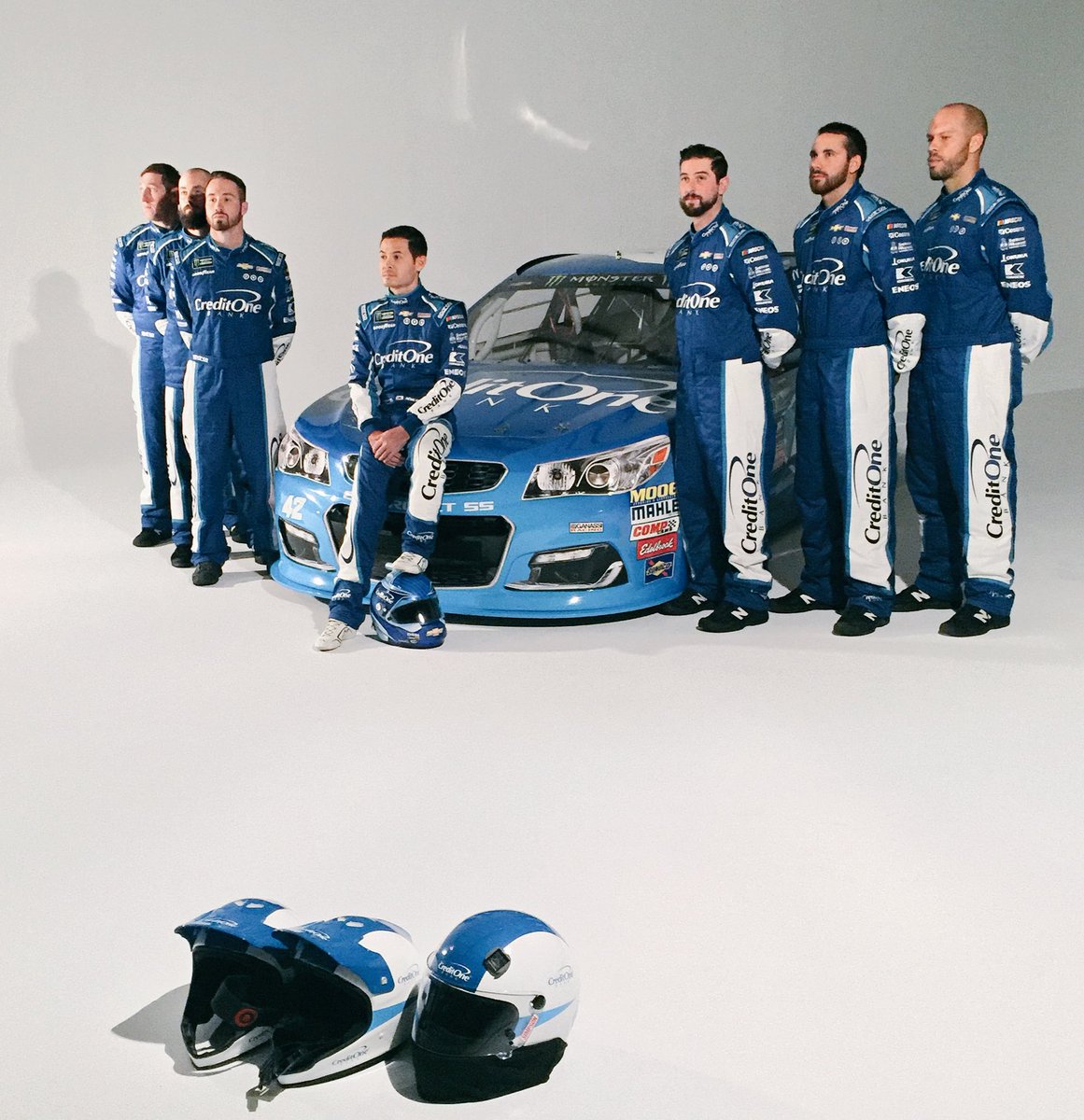 Credit One Bank, who first partnered with CGR last season for several races with the No. 1 team, will also continue its partnership as an associate sponsor with Jamie McMurray and the No. 1 team in 2017.

Credit One Bank will serve as the primary sponsor for multiple races on Larson’s No. 42 Chevrolet SS, as well as an associate sponsor with the No. 42 team throughout the 2017 season. Larson is entering his fourth full-time season in NASCAR’s premier series and is coming off his best season to date, which featured a ninth-place finish in the final point standings and his first MENCS victory.

NASCAR and Beyond: Credit One Bank is entering its second season as a partner with CGR, debuting last year as a primary sponsor on the No. 1 team for five races and an associate sponsor for the duration of 2016. Credit One Bank also returns as the “Official Credit Card of NASCAR”, after announcing a multi-year partnership with the sanctioning body at the start of last season.

Good to be Home: Headquartered in Las Vegas, Credit One Bank will be seen across multiple CGR cars during the first NASCAR Goes West weekend at Las Vegas Motor Speedway in March. McMurray’s No. 1 Chevrolet SS will feature a paint scheme shared by Credit One Bank and Cessna, and Larson’s No. 42 Chevrolet Camaro in the NASCAR XFINITY Series (NXS) will race with a full Credit One Bank paint scheme.

Continued Growth: After three full-time seasons in the MENCS, Larson, the 2014 Rookie of the Year continues to show off his talent and potential behind the wheel. Last season, he picked up his first win, garnered a career high 10 top-five finishes, and more than doubled his total laps led to finish with a career high 379 laps running up front. In total during three seasons of full-time racing, Larson has one win, one pole award, compiled 42 top-10 and 20 top-five finishes, and has led a total of 547 laps.

Racing and Winning Everywhere: 2016 saw Larson win in almost every vehicle he piloted across multiple series. To go along with Larson’s first career MENCS win, he also posted two wins in the NASCAR XFINITY Series and one win in the NASCAR Camping World Truck Series. Additionally, Larson won dirt races in both winged sprint cars and midget cars throughout the year, racing across the country and abroad.

Laura Faulkner, Vice President of Marketing Communications, Credit One Bank: “We received such a positive response from our first year of partnership with NASCAR and Chip Ganassi Racing. We are excited to grow our support this season and continue to bring the benefits of the Credit One Bank NASCAR credit card to millions of race fans. Extending our sponsorship to Kyle and the No. 42 team is a natural next step for us, while we continue to back Jamie in his chase as well. We look forward to seeing the No. 42 Credit One Bank Chevrolet SS on the track throughout the season.”

Steve Lauletta, President, Chip Ganassi Racing: “We are very excited to grow our relationship with Credit One Bank and introduce the company as a partner on the No. 42 Chevrolet for the 2017 season. We enjoyed a successful first year with Credit One Bank last season on the No. 1 Chevrolet, and look forward to continued success this season with Kyle and the No. 42 team. Having Credit One Bank grow with our team is not only a testament to the strength of our sport, but also highlights the enthusiasm we have this season for our teams at Ganassi as both Jamie and Kyle look to build off of a strong 2016 season.”

Kyle Larson, Driver No. 42 Credit One Bank Chevrolet SS: “I can’t wait to get back on track this year and pick up where our team left off last season. This time last year we were getting used to some new guys on our team, so we’re really excited to start off this season with some good chemistry and an idea of what we all need to do each weekend to contend for wins. We’re also looking forward to our first season with Credit One Bank as a part of our team. They were a great partner with Ganassi and NASCAR last season, so we’re excited for some great races with them this year.”