Cumblerland Raceway dirt track is returning from the graveyard. The Maryland dirt track was formerly known as Rock Allegany County Speedway. It opens in 2017 as The Greater Cumberland Raceway.

Hidden in the hills of Maryland sits this 1/2 mile dirt track. A track that just-nearly nearly escaped the bulldozers. A community outrage has saved the track. It’s a beautiful story of the loyalty and dedication dirt track fans have for their local tracks. The fans pulled together as a group in hopes of saving the speedway and now the track is officially re-opening.

The dirt track clay is set. Guard rails are being replaced, new concrete walls are being installed. The Greater Cumberland Raceway will bring back racing at the historical facility in April 2017. 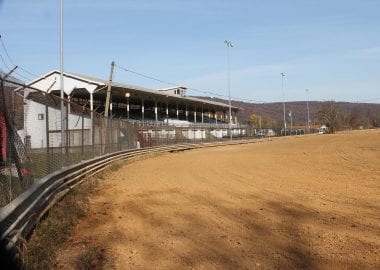 The Cumberland, MD dirt track joins a growing list of dirt tracks re-opening all over the country. Dirt track racing is coming out of a recession, things look very bright for the 2017 dirt racing season and beyond. Not, just for Cumberland Raceway, for dirt tracks across the county.

The Maryland racetrack first opened in October 1924. Back then, it was still a dirt track but it was a dirt track used for horse racing. In 1967, forty years after it’s opening, it welcomed auto racing for the first time. Stock races and USAC sprint car events were soon hosted at the speedway. Those raced paved the way for racing legends.

15 racing nights have added to the Cumberland Raceway 2017 schedule. That schedule can be viewed below. The grand re-opening is set for April 15th. The dirt track remains open through the fall. On October 7th, the dirt track will host the Queen City 50, the showcase event for the Maryland racetrack. 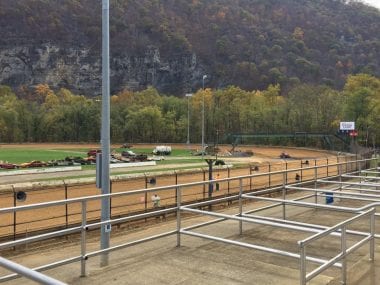 This re-opening of the newly named Cumberland Raceway is a community effort. Members of the community have been volunteering their time and money to help get the dirt track going again.

Bake sales and spaghetti dinners have been hosted by a small group of awesome racing fans to raise funds for the new dirt track developments. That has inspired a whole set of dedicated race fans to offer their support as well.  Thanks to the racing fans, they will be able to turn the lights back on and welcome dirt racers from across the county.

Cumberland Speedway talks their dirt track re-opening, “We are glad to announce that once again, starting in 2017, racing fans will be delighted to enjoy the revved up engines of stock car racing on Saturday nights at the fairgrounds.”

Racing will officially return to the Allegany County Fairgrounds for the first time in nearly three years. The history speaks for itself. The likes of Mario Andretti and Tiger Tom Pistone have graced victory lane at this famous raceway.

Things are falling into place nicely at the fairgrounds with opening day fast approaching in April at The Greater Cumberland Raceway. TGCR, LLC and Todd Brode are promoting the upcoming Maryland dirt racing events. The track is operating under a non-profit organization.