The track is billed as a 1/4-Mile, Semi-Banked Oval. However, I guess it’s only considered semi-banked in the state of Tennessee. Anywhere else, this is a high banked bullring. It’s a fantastic race track! 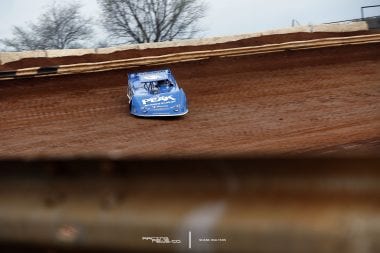 Don O’Neal started his night off on the right foot. Which he usually does. Though, in 2017, more often than not Don O’Neal and Clint Bowyer Racing have been hit with bad luck in the feature.

The #5 dirt late model carried the fast setup into the heat race. He started on pole, led every lap. He held off his teammate, Darrell Lanigan. Timothy Culp won heat race number 2. Dennis Erb Jr won heat 3, he held off Bloomquist to take the heat win.

Josh Richards started 3rd in heat number 1. He fell backwards, finishing 7th of 9. He will be sent to the B Main. He was the LOLMDS point leader heading into the weekend. He was now starting at the front of the B-Main. He lead flag-to-flag, no contestants. He easily transferred into the main.

The LOLMDS field was now set. Drivers were set to whip around the bullring, chasing a $10,000 check. 50 Laps of dirt late model racing. 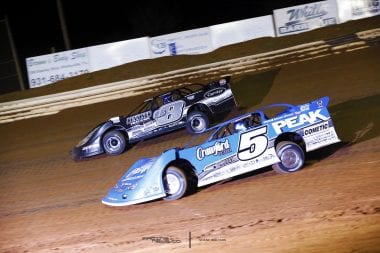 Green Flag. Don O’Neal and Dennis Erb Jr lead the field into turn 1 in front of a packed house at the dirt track. He runs the middle and drives it in hard, Timothy Culp on the high-side. Don O’Neal clears Culp in the middle of turn 2.

Caution. Restart, Don O’Neal went to the bottom. Culp picks the middle. This time, Culp takes the lead. Timmothy Culp is the new leader. The track is racier every lap!

As the lead changes hands a new face is here. Tonight, Tanner English made his first start in the Lucas Oil Late Model Dirt Series on the season. He started 7th and is now challenging Bloomquist for 4th. He’s clicking laps around the bottom.

Meanwhile, Dennis Erb Jr and Don O’Neal run side-by-side for 2nd. They are hurting eachothers lap times, Culp is pulling away from the field. Caution.

Don O’Neal will get another shot at Culp. He’s running now racing for the lead as Dennis Erb falls backwards on the restart. He defaults back to the low-line and slides passed Culp. Culp is now defending 2nd, Tanner English pressures for 2nd. O’Neal disappears into the distance. Caution.

Restart. O’Neal, English and Bloomquist. O’Neal leads the field out of turn 2. Scott Bloomquist drives through the middle, taking the runner up spot. Bloomquist is now searching for the leader. 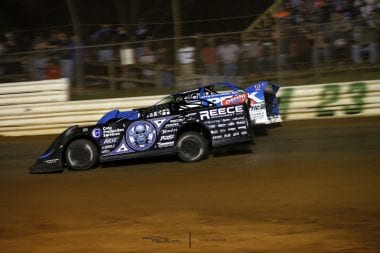 He finds him and dives to the bottom, taking the bottom. Don O’Neal and Scott Blooquist race side-by-side lap after lap for the lead. Bloomquist clears O’Neal, barely. He continues to leave room for O’Neal. Clean racing at the front.

However, the very next corner, O’Neal throws it in a bit harder on corner entry. The high-side momentum carried him to the outside of Bloomquist. A head of steam on corner exit, back to the lead, on the outside.

O’Neal takes the lead back for about the 5th time in a single event. Bloomquist liked what he saw. He moves to the top, inches from the wall, searching for the cushion. O’Neal besides he’s had enough at the top, he’s back to the bottom. Bloomquist isn’t going to have enough. 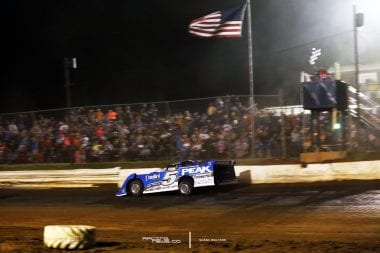 After the way his season has gone, he decides to run an extra lap under power, just to make sure that was the checkered flag he saw waving in the air, it was.

Don O’Neal climbs from his dirt late model, fists in the air. His son Hudson O’Neal comes over on the 4-wheeler to congratulate him.

“The crew has worked so hard on this car, people don’t realize how much work goes into these cars. Anthony Burroughs and “Big Snack,” they don’t get any days off it seems. Last night at East Alabama was the first time we ran this car. I never thought he [Bloomquist] would get around me on the outside and then he went to the bottom. When he did that I thought, I could do that as well and it worked out.”

The Lucas Oil Dirt Series Duck River Raceway Park winner closes, “I have had so much bad luck recently, it feels great to get back to victory lane again.”

The Lucas Oil Late Model Dirt Series is is off until next Friday. On April 7th the national dirt late model tour will enter Batesville Motor Speedway. The following night, they will re-re-rack ’em and do it all over at the Batesville, AR dirt track.