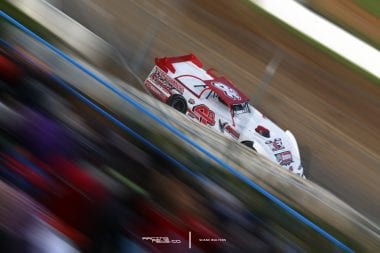 After qualifying the track crew went to work. The track begun to dry a bit so they brought out the water truck as a remedy. All week the area was hit with rain. The announcement of the water truck raised some suspicions in the grandstands. I heard one guy yell out, water truck?!

Well, it turned out great. after qualifying the track had all the looks of a single groove race track. Most drivers ran the same bottom line. However, once the heats got underway, we had full fledged side-by-side dirt late model racing.

Shanon Buckingham won the first heat race. He held of the polesitter to take the win. There was a tangle early in that race. Boom Briggs was forced to jump the inside berm to avoid contact. Briggs went up in the air, nose diving back into the same berm.

Michael Chilton won heat 2. He held off Josh Richards for the win.

Scott Bloomquist won heat 3. We had one get upside down in this race. Denis Erb Jr, Tim McCreadie and Cody Mahoney came off turn 4 three wide. Problems occurred when the car in the middle was the only one aware of the 3 wide situation.

Just ahead of the flag stand they all ran out of space. Fenders crunched. Dennis Erb pumped the brakes on the bottom. Mahoney also bounced off McCreadie. Mahoney was sent to the left, across the nose of Dennis Erb Jr. 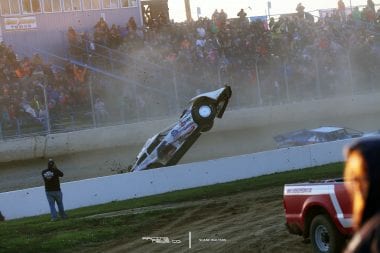 Cody Mahoney got turned completely backwards at near top-speed. He then hit the inside berm, backwards. That sent him into a barrel roll. The car finally came to a stop on top of the inside wall. Cody climbed from the car rather quickly.

Earl Pearson Jr won the 4th and final heat race. He ran along the high side of the racetrack as Don O’Neal poked his way around the middle.

Green Flag. Shanon Buckingham led the field to the green flag, Scott Bloomquist on his outside. 60 laps around Florence Speedway.

Buckingham began to slid backwards through the field from the drop of the green flag. Meanwhile, Scott Bloomquist began checking out on the field.

By lap 20, Josh Richards cracked the top 3. The Best Performance Motorsports driver started in 7th. Josh Richards was making up a ton of time through the bumps at the bottom of turns 3-4. The leader of Scott Bloomquist and Tim McCreadie mostly ran right through the middle.

For the few that went through the bumps, it was hit and miss. Either you made up time or you lost a whole bunch of time. Hitting it wrong would send both front wheels into the air. No turn, drivers would chase the car all the way up the track to the outside wall. It was risky. 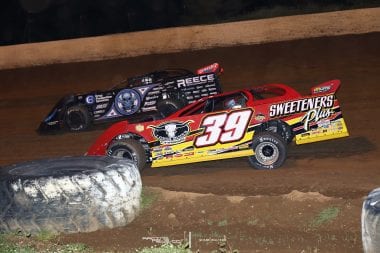 Meanwhile, Tim McCreadie was just riding behind Bloomquist. Until he decided to hit the gas pedal. He made a charge at Bloomquist. Running through the bumps, he pulled alongside Bloomquist.

Caution. On the restart Bloomquist put a gap on the field again. This time McCreadie didn’t waste time. He charged directly back to the same line. Again he pulled along side Bloomquist.

Bloomquist held onto the lead. However, Josh Ricahrds was now pressuring Tim McCreadie for 2nd. Richards was forced out of his groove, to the middle. He drove around Tim McCreadie. It didn’t last long, McCreadie slipped back passed Richards. Meanwhile, Bloomquist checkout out by 5-8 car lengths on the both of them.

In the closing two laps, Bloomquist catches lapped traffic. Put all 3 LOLMDS championship contenders under a blanket! They all have a shot at the win.

Scott Bloomquist led flag to flag at Florence Speedway. He collects the $12,000 check in the 31st Annual Ralph Latham Memorial.