View full Luxemburg Speedway results from the Spring Shootout below. This is a spoiler free race report

The show is getting off to a later start than usual. Weather has forced track crews to work on the racing surface. Props to them for doing the right thing here. Delaying the race an hour, isn’t a big deal if you can get the track right with an added hour.

Cars are on track. The track looks to have multiple grooves based on hot laps. 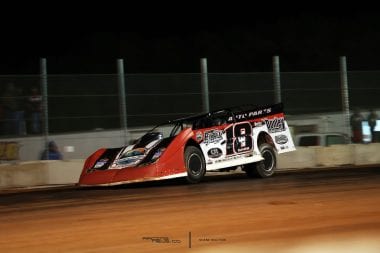 Qualifying is next. Shannon Babb rolled around Luxemburg speedway in 13.259 seconds. He’s the polesitter tonight. Scott Bloomquist is the current points leader and last nights winner. Scott spun on his 2nd lap in qualifying. Most of the faster cars found speed running the bottom groove.

Shannon Babb wins heat race #1. Josh Richards followed that by winning heat race #2. They both did while glued to the bottom of the racetrack. The low-groove is looking darker and darker.

Owens was sent to the B-Main along with Boom Briggs. AJ Diemel from Elk Mound, WI wins the B-Main. Boom Briggs runs 2nd. Only 4 drivers are being sent home early tonight.

Next up, the 50 lap feature at Lexemburg Speedway!

Shannon Babb and Josh Richard will lead the field into turn 1. Josh Richards needs a solid points race after spinning from the lead last night at LaSalle Speedway.

Green Flag. Shannon Babb gaps the entire field into turn 1. A great restart by Babb as Josh Richards nearly gets stuck on the high-side. 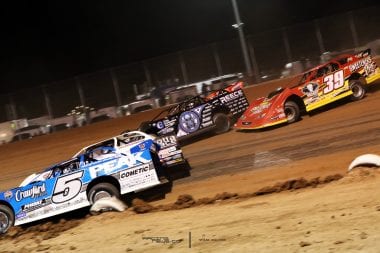 Meanwhile, the Lucas Oil Dirt Late Models are 3 and 4 wide behind them. McCreadie and Bloomquist are both taken 4 wide. 1-2 in the championship standings were in a risky situation there! McCreadie pulls out of the throttle, removing his car from the ‘four wide and in the middle’ scenario. Nobody crashes! That was fantastic racing.

Shannon Babb continues to lead. He’s pulling a gap to Josh Richards. The field is still very aggressive in the back.

Caution. It’s Bloomquist! More trouble for the points leader. He hits the pits. The #0 returns but he’s lost a lot of track position, he will have to start at the tail.

Green. Shannon Babb is checking out again. The field quickly falls into line. The track is changing quickly.

The leader is beginning to catch lapped traffic. He’s one car away from putting Bloomquist a lap down. However, he getting held up by Hudson O’Neal.

Josh Richards is starting to close. Gregg Satterlee has a train of cars behind him as well. McCreadie is looking for a way around. But, nobody is moving off the bottom. 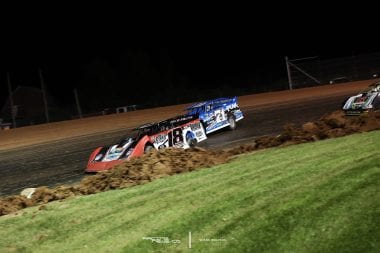 Richards might be faster, it looks like he might be. Though, Babb is being held up as well. The entire field has been running the bottom lane, lap after lap. It looks extremely slick on entry, for everyone.

Josh Richards has nothing for Shannon Babb. The #18 is going to win the Spring Shootout at Luxemburg Speedway!

From victory lane, “I just want to thank all the fans for coming out tonight. It was quite cold to be out here.”

Babb continued to talk about the track work, “Thanks to the track crew for getting this track raceable. I wasn’t so sure they could do it late today, but they scraped off the top and it was smooth.” 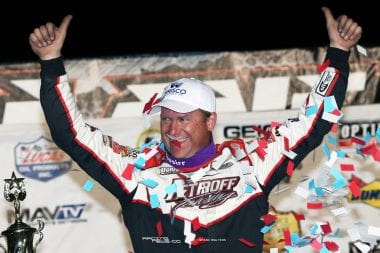 “This is the first time a lot of us have been here. I knew Josh would be tough to beat tonight. We picked the right tire for the feature and I really like this no cutting and siping of the right rear tire. It makes for some competitive racing. This Rocket car has been fast from the get-go this year. We haven’t run as much as a lot of the other guys. We had a great run at Batesville last month and then won last week at Farmer City.”

“Thanks to Mark Richards Racing for their help. The set-ups we have gone with for this race car have all been good. I want to thank Ed Petroff of Petroff Towing, Donley Trucking, Kuebler Oil, CJI Piping, Hunting for Hope, and Hoosier Tires for their assistance,” said Babb.

The tour was scheduled to head Deer Creek Speedway for the NAPA North Star Nationals next. However, that race as been rained out.

They are back at it on May 23rd, the Lucas Oil Late Model Dirt Series heads to I-80 Speedway in Greenwood, NE. 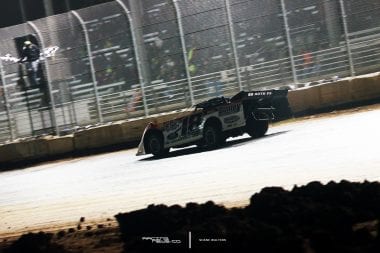