View more photos of the Hulu NASCAR Racecar below. 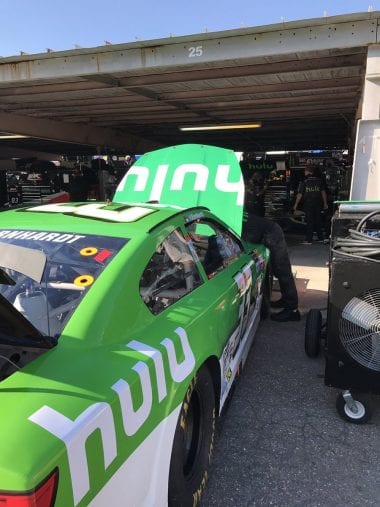 The Hulu NASCAR sponsorship marks the first of its kind for Hulu, and will bring the Hulu brand to the NASCAR Cup Series for the first time. Jeffrey Earnhardt’s newly-rebranded #33 Chevrolet and racing suit will make its on-track debut this Sunday, June 4th at the “AAA 400 Drive for Autism” Monster Energy NASCAR Cup Series Race at the Dover International Speedway.

Subscribers of Hulu’s new live TV service, which launched in beta in early May, will be able to stream this weekend’s race live on FS1, and can stream future races across major sports networks.

“Hulu is driving the next generation of TV, and Jeffrey Earnhardt represents the next generation of racing, so this is the perfect partnership to bring our brand to NASCAR fans,” said Patrizio Spagnoletto, Hulu’s Vice President of Subscriber Acquisition. “As a proud sponsor, we’re beyond excited to work with – and cheer for – Jeffrey and the entire #33 team.”

“I was a Hulu subscriber before becoming the Hulu driver so I’m really excited to represent their brand and spread the Hulu message. Being able to watch live TV on your phone is incredible, especially during rain delays, and they have a giant library of movies, originals and shows that’s perfect for someone on the go.”

He continued, “Hulu is the future of entertainment and with their support our future is a lot brighter. I am extremely proud to wear the Hulu green and look forward to a long term partnership and bringing NASCAR fans a service of great value with this sponsor,” said Jeffrey Earnhart.

With the recent addition of its new live TV offering , Hulu is the only TV service that gives subscribers the option to bring together live, on-demand, originals, and a vast premium streaming library all in one place, across several supported living room and mobile devices. Hulu now features a groundbreaking, highly personalized new user experience.

The Hulu with Live TV plan allows fans in many cities to stream NASCAR races – as well as a host of other major sports events, like the NBA Finals, Major League Baseball and Monday Night Football — for $39.99 per month, with no setup costs or hidden fees. This new partnership will bring the Hulu experience closer to NASCAR and sports fans everywhere.

Jeffrey Earnhardt is the grandson of 7 Time NASCAR Cup Champion Dale Earnhardt and nephew of this generation’s most popular driver, Dale Jr. Jeffrey began his racing career piloting a silver 4 cylinder Yugo on the dirt tracks of Wythe Raceway in Rural Retreat, Virginia.

He won Rookie of the Year at the local track and knew immediately that he’d be chasing his dreams to the paved tracks of NASCAR. Creating his own company and working his way thru the ranks like his grandfather did, Jeffrey has competed in Truck, Xfinity and Specialty events including the Rolex Series and NASCAR Europe Series.

He is absolutely committed to “Earning Earnhardt” with 2017 being his first full Monster Energy NASCAR Cup Series season driving for Circle Sport- The Motorsports Group owned by Joe Falk. 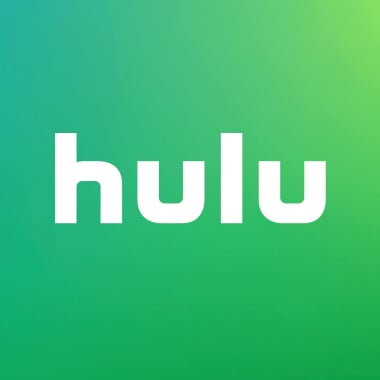 Hulu is a leading premium streaming service that offers instant access to live and on demand channels, original series and films, and a premium library TV and movies to millions of subscribers in the U.S. Since its launch in 2008, Hulu has consistently been at the forefront of entertainment and technology.

Hulu is the only streaming service that offers both ad-supported and commercial-free current season shows from the largest U.S. broadcast networks; libraries of hit TV series and films; and acclaimed original series including The Handmaid’s Tale, The Mindy Project, The Path, 11.22.63, the Golden Globe® nominated comedy series Casual, as well as the upcoming Future Man and The Looming Tower.

In 2017, Hulu added live news, entertainment and sports from 21st Century Fox, The Walt Disney Company, NBCUniversal, CBS Corporation, Turner Networks, A+E Networks and Scripps Networks Interactive to its offering – making it the only TV service that brings together live, on-demand, originals, and library content all in one place, across living room and mobile devices.