Qualifying
Issues right off the bat for Colton Flinner. His engine let go.

Mike Norris took the top spot in Group A Qualifying. He circled Lernerville Speedway in 16.889 seconds.

Don O’Neal is making his first trip to Lernerville Speedway today. He led group B qualifying for the majority of the session. However, Kyle Bronson knocked him off the top spot at the tail end of qualifying. Bronson was quickest in Group B.

This is the backup car for McCreadie. He put the primary in the wall in the first event this morning. McCreadie just won with the backup, “This car doesn’t feel as good. But maybe I don’t know what I’m suppose to feel.”

Heat 2
Green. Marlar and Bloomquist lead the field. 4 wide behind them. Caution, Tyler Erb is around. Bloomquist is looking for the lead. Marlar runs the middle as the rest of the field runs the bottom. Bloomquist drives right by and disappears into the distance. The defending Firecracker 100 winner takes the win in heat 2.

Scott Bloomquist following the heat win, “We’ve been working on this car gradually, it’s time for the big bucks.”

Heat 3
Green. Kyle Bronson jumped the start, he’s sent back to row 2. Madden and Lanigan lead the field. Madden gets the jump on Lanigan. Bronson is going backwards. Bagley and Frank run side-by-side for 3rd. Kyle Bronson has moved to the top, he’s now moving in the correct direction through the leaderboard.

Chubb and Bagley continue running side-by-side. Bronson and Heckernast are side by side as well, for 5th. They are both catching 3rd and 4th. Bronson clicks around Bagley on the outside, he dives to the bottom taking the bottom away from Bagley. Meanwhile, Chris Madden is the winner.

Heat 4
Don O’Neal and Brandon Sheppard lead the field into turn 1. Don O’Neal drifts from the bottom to the top, Sheppard stays on the top all the way through turn 1.

Don O’Neal is barely clear of Sheppard, the #1 Rocket slides under his fuel cell and to the bottom. He can’t get it down in turn 3. O’Neal drives away. Caution.

O’Neal gets a great start. He carries Brandon Overton with him, the highside prevails. Overton isn’t done, slide job in turn 1. Move Overton to the lead. Zeigler sits in the 4th and final transfer spot, Junghans and Satterlee want it too. Junghans is around. Satterlee looks low as well, he can’t make it work. Overton is the first across the line!

Brandon Overton, “Just screwed up a little bit in qualifying. That was probably my fault again.”

Uncle Sam 30
Michael Lake and GR Smith battle side-by-side for the lead. They swap lanes, GR Smith to the bottom. A slide, new leader. Boom Briggs runs 3rd. As the leaders slowed each other down, it allowed Briggs to close. Caution. Now Briggs will really have a shot.

Lake gets a terrible restart. He falls to 6th before the start finish line. Boom Briggs sets sights on the leader. He looks low, he there. Cant close. GR Smith builds up the heat in his tires. He drives away.

GR Smith will win the Uncle Sam 30. He won’t start the main event, but at least he leaves with something.

Main Event
Now, fans have been waiting all weekend for this one. They will finally get it! The 2017 Firecracker 100. 100 laps around Lernerville Speedway for the World of Outlaws Late Model Series drivers. Brandon Overton ad Darrell Lanigan will lead the field to green.

Bloomquist to the pits! Problems before the race even gets going.

Problems! Darrell Lanigan is the next Lucas Oil driver to drop out of the race. No caution. Lanigan coasts to the pits. He was running 2nd.

Meanwhile, Overton is gone. 10 laps in and Overton is already deep in lapped traffic.

Lap 20, Tim McCreadie has chased down the leader. Slide job in turn 1, new leader. Turn 3, Overton returns the slide. McCreadie never led a lap! As these two dice, Marlar is reeling them both in.

Lap 30, the track is taking on a new shade. Understandable, given this is the second main race held on this track today. McCreadie ran comfortably behind Overton for several laps. Now, he’s looking more aggressive. Overton is bumping the lappers, he needs to get by. In the shake up, Marlar is around McCreadie.

Overton is struggling with the lappers. Marlar and McCreadie suddenly begun to move in again. Overton, Marlar, McCreadie all run the bottom. Nose to tail. Marlar is looking to the outside in turn 4, can’t get it done.

Marlar is experimenting. He’s trying several lines. However, he can’t get too crazy. Everytime he picks the wrong line, McCreadie takes a peak under him.

Marlar falls back in line. The entire field runs nose to tail. Overton is trapped behind a lapper but there’s no way around him. The track is locked down.

Don O’Neal has caught the fuel cell of McCreadie. Unless he does something crazy, there’s no door for a pass.

Brandon Overton is going to win the 2017 Firecracker 100!

Brandon Overton speaks from victory lane, “This is the biggest win of my career so far.” 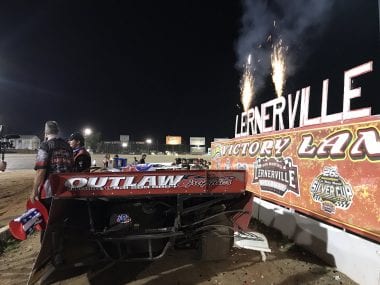