On Friday, the parties met for the 3rd time to discuss a possible settlement – View court ducoments below

View court papers below from the Ward Family vs Anthony Wayne Stewart (Tony Stewart). 10 pages of Tony Stewart lawsuit court documents can be seen below.

The first mediation date was held on April 18 in Saint Louis, Missouri.

The second was held in early June. Dual sessions, eight-hours a piece.

Yesterday, in Syracuse, NY the parties met for a 3rd time. In attempts to reach a possible settlement in the case. 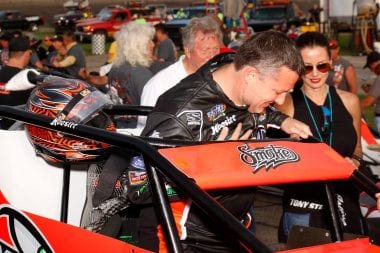 No progress was made.

The family of Kevin Ward Jr. claims sprint car racer Tony  Stewart “could have easily acted reasonably and with prudence to avoid striking Ward, just as all other drivers had done”.

The lawsuit also alleges Tony Stewart “acted with disregard” to Kevin Ward Jr’s life as he accelerated his car, “driving his vehicle in a manner that would terrorize Ward and thereafter strike, severely injure and kill Ward.”

The lawsuit against Stewart continues to state, “At all times herein, Defendant Stewart was engaged in the business of being a professional race car driver. Stewart was gifted with unique race car driving skills and possessed extreme skill and control over his race car.”

“Defendant agreed to abide by the customs and norms of race car driving, which included hot to prudently and safely operate a race car during a yellow caution.”

“The negligence and/or recklessness of the Defendant, Tony Stewart, and his violation of reasonable and prudent standards of a race car driver (standards the were followed by all other passing drivers), caused Stewart to run over Ward, and resulted in Decedent Kevin A. Ward, Jr., to undergo terror before being severely injured and suffering extreme pain, and ultimately death.”

View the official court documents below from the Ward Family vs Tony Stewart case.