Is there ever just one side to a story? Tony Izzo Jr has a very different side to tell regarding Josh Richards’ Thaw Brawl incident

LaSalle Speedway has lost it’s DIRTcar sanction. They’ve also lost their Summer Nationals dates. But, Worst of all, the track is being dragged through the mud by the World Racing Group.

Below are the alternative viewpoints of the same story, spoken from the track promoter. 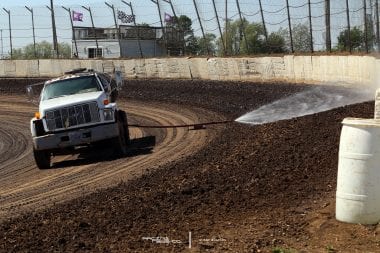 What happened? LaSalle Speedway lost it’s sanction from the World Racing Group for “allowing a DIRTcar suspended race team to participate in defiance of the sanctioning bodies warning.” In addition to that, a fine was issued to Josh Richards for “filing a deceptive entry” and an additional penalty to Best Performance Motorsports for “participating while under a DIRTcar suspension”.

Tony Izzo Jr is the promoter of LaSalle Speedway. He offered a significant amount of his time, just hours ahead of one of his biggest races of the year at his facility. He wanted to explain some things to the diehard dirt racing fans and set a lot of facts straight regarding Josh Richards’ entrance to the Thaw Brawl event.

Hear what Tony Izzo Jr has to say below.

It’s not that simple. Here’s the other side of the story… 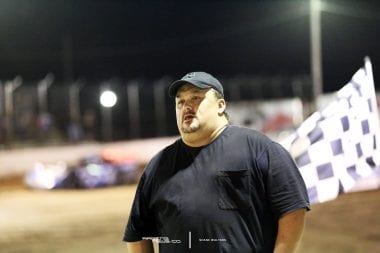 Tony Izzo Jr opens the conversation with, “The bottom line is… Jason Feger said it best. That we’re going to hurt the sport. At the end of the day, the fans are the ones that lose in the whole deal.”

Izzo continued, “I don’t like the decision that was made, at the time it was made. I don’t have a current lawsuit with anybody. I don’t have a current problem, with anybody that comes here to want to race. If this is something that they have, pending. For something that happened at another facility, that wasn’t under our watch or my watch. I shouldn’t punish my fans.”

“That doesn’t mean that I condone cheating or that I think people should be able to get away with whatever. I want everybody sticking to the rules and to make it as even a playing field as it is.”

“But working with the World Racing Group isn’t an even playing field. It’s either their way or this is the result. At the end of the day, you’re a sanctioning body and you should put the best interest of the race fan and the race track and the racers ahead of your own.”

“That whole thing can and should be handled in a different way. Why keep punishing people that had nothing to do with it? Whether, they were legal or illegal, that’s not what I was debating. I have a show to put on. I’m going to put on the best possible show I can, with the best possible racers I can.”

Sam Driggers, of the World Racing Group was on-site at LaSalle Speedway the day of the Thaw Brawl. On-site, briefly. 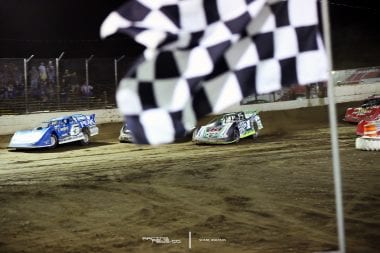 “I asked specifically for clarification on the ruling. Several times. The days leading up to the race, the day of the race, I asked for some documentation. I asked them to bring me up to speed with all of this stuff. Their answer to me was, ‘You don’t need to know nothing more than if it’s a UMP race, he can’t race it.’ ” 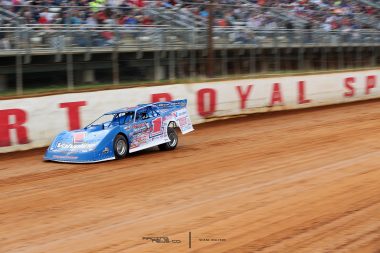 This year, Sheppard was selected to drive the blue #1 Rocket house car for a different team, owned by Mark Richards. A team that was scheduled to complete in the World of Outlaws. As soon as that announcement was made, Sheppard pulled his name from the lawsuit. He was the first driver to do so, that was in November 2016.

UMP waited until the day of the race to put their foot down, “None of my fellow promoters, who have all called me and supported me, will go out there and put their name on the line. But they said the same thing. My other fellow promoters are just like me, in the sense that they were never notified or provided with any documentation regarding the current status of this situation.”

“Dirtcar sends out a weekly email to all of its tracks/promoters providing the current members of Dirtcar but somehow it never contains a list of current suspended members. We have never been notified in a business manner regarding this situation. We never received an email.”

Izzo has a question for DIRTcar, “If there’s 200 UMP race tracks, none of us got anything saying so-and-so cannot race until this, whatever it is, specific date. Do you think that would be the first thing you’d put out there to everybody?”

Noticeably frustrated, Izzo continues, “But they don’t feel like they have to do that. We’re all suppose to just say, ok you don’t want us to have him here tonight. Ok, we won’t have ’em. They told me, ‘well if you have ’em, we’re going to do this to you, we’re going to take this from you and that from you.’ So, at the end of the day they just scare us into saying, ‘ok we won’t do it.’ ” 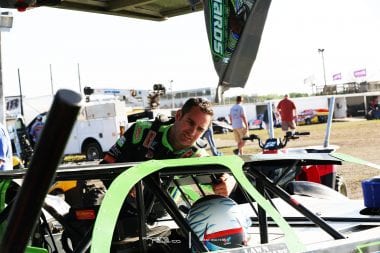 Tony Izzo tried to explain his side to the series before they handed out their lift of track sanction, “I reached out several times to Brian Carter, President of the World Racing Group, to no avail.”

“I’ve done business with this company for 30 years and that’s what I’m upset about. That I don’t even get a return email or courtesy phone call. I wanted to tell me side of the story to him. I just talked to Josh Richards, I told him at the end of the day, they’re [World Racing Group] trying to make me and you look like a villain, like we tried to pull one over on everybody.”

Tony Izzo Jr wants to set some things straight, “I think there’s some misunderstandings. I didn’t try to pull the wool over nobodies eyes. Sam left the race track.” 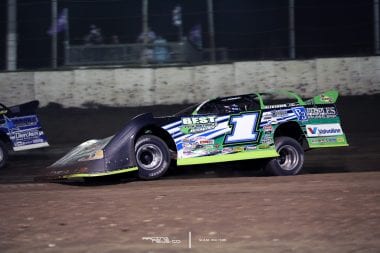 “I said to Sam, ‘it’s only 4:30 in the afternoon. How soon can we have some sort of document that you have sent to Josh Richards or Best Performance Motorsports or that you sent to me, that I missed. I need something to go off of, so that I can go over here and tell them they can’t race. Without that, I can’t go over there and ask somebody to leave my facility. That’s a customer that I have no problem with.’ ”

“I said, ‘if you want to go over there and tell them he has to leave and explain to him why. I still have a problem with you making him leave. But if that’s you’re choice, then you go make that choice.’ ”

Basically, what the World Racing Group was asking Tony Izzo to do was role-play the police officer. How so? Let’s say the Sheriff pulls into the pits and says “we’re looking for Bob Smith.” Then elaborates stating “That driver [Bob Smith] can’t race tonight because we’re arresting him. We want you to go get him, arrest him, walk him off the premises and ask him to leave.”

The LaSalle Speedway promoter declares, “That’s not my job! I don’t have a problem with Bob Smith. I’m not going to go to a paying customer of mine and throw him out for something that I had nothing to do with.”

“At 4:30 on raceday, I just said, ‘Can I get a document?’ Their answer to me was, ‘We should drive around with a briefcase?’ I said, ‘No, not a briefcase. But in today’s technology, can ya hit a button?’ I said ‘we got two more hours before we ever go racing.’ ”

Tony Izzo continues to describe his conversation with the series director that day, ” I said, ‘At this point here’s the problem Sam. I begged people, all Winter long, on facebook, social media, for 10 months to please come and support this race. Come be apart of it. Now, I owe it to them to go put on the best possible show I can. I said there’s 38 other racecar drivers here too, that I need to go make sure I have my best race track for.”

“I said, ‘At the end of the day, this is your guys problem that you have with them. Sam said, ‘Well then we might just have to leave and it not be sanctioned anymore.’ I said, ‘If you leave it’s no longer UMP sanctioned?’ He said, ‘That’s correct.’ Next thing I know, he left.”

“So when he left and stated that it was no longer a UMP sanctioned race, what did I do wrong at that point even? How can UMP be the one punishing me and Josh if UMP wasn’t part of the race? And maybe they wanna send back the $120 that they collected as an entry fee from the racers.”

“I was doing it for all the right reasons. I mean this has been over a year already that race fans in this area had to go without seeing these guys race. Because of this whole mess. The punishment, doesn’t fit the crime.”

“The tire suspension thing has been over. Everybody has paid their dues, paid their time. That has nothing to do with why they didn’t want him [Josh Richards] in the race. Their answer was ‘There is a new pending lawsuit filled by Jimmy Owens, Scott Bloomquist and Best Performance.’ ” 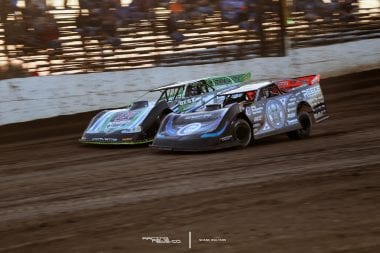 “I spoke to Scott Bloomquist at East Bay in February. He said he was going to be at the Thaw Brawl. I said, ‘Well isn’t there still a suspension?’ He said, ‘No, our suspension and all that’s over.’ I said, ‘What about this pending lawsuit?’ Scott said, ‘It’s a pending lawsuit. We ain’t even filed yet, we haven’t done anything. We’re looking at options.’ ”

Would Tony Izzo want his DIRTcar UMP sanction back? 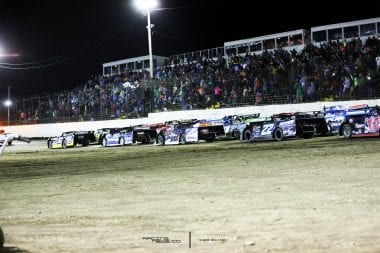 He stated, “Not necessarily, in what fashion can I get it back?”

He elaborated, “I put a post out there saying I was going to run that same weekend [June 16th and 17t] and do whatever I had to do.”

“But again, the only thing that does is hurt the fans. Because, now the fans have to choose if they want to go over to the Summer Nationals race or come over and support me. That’s not fair. I’ll just pick another date so the fans don’t have to choose. That’s one of the biggest problems in this sport is that we can’t get everybody together and get the best racers at the best facilities from week to week.”