Scott Bloomquist tells the other side of the story

While, setting the pressures for his tires at a recent Lucas Oil Late Model Dirt Series event, Scott Bloomquist invited me into his hauler for a quick interview. He confirmed that he will be returning to the Dirt Late Model Dream at Eldora Speedway on June 8-10, 2017.

This story has officially come full circle, it’s nearly a full year since the failed tire tests at last year’s Dream event. Those tests resulted in hefty fines and immediate suspensions for 5 drivers, including Bloomquist.

Since June of last year, Scott Bloomquist and others haven’t been seen at any racing event sanctioned by the World Racing Group. The ban was lifted, months ago. However, despite the removal of the suspension, many drivers signed their names on a lawsuit and opted not to sign-in at any World of Outlaws or DIRTcar event.

Recently, dirt late model driver Jason Feger spoke openly against driver suspensions. Scott Bloomquist wasn’t aware of this. Understandable, given he’s not exactly an adopter of social media. I informed him of the Jason Feger cliff notes, then requested his opinion on the same topic. 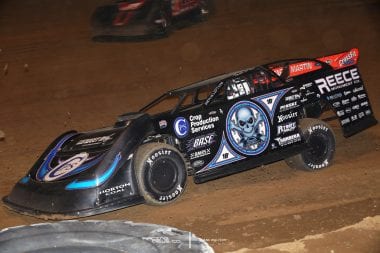 He explained, “So much of this stuff is a judgement call. Especially when it comes to tires. Like what happened to all of us. You know, we all know we didn’t do it.”

We’ve seen statements from the World Racing Group. But, how does the defending side of the story go? Scott Bloomquist states, “Why there were so many of them [failed tests]… The lab was finding the same the same thing in other tires all over the United States. Well, it just so happens that the lab just got new equipment to test with.”

Why go back? Scott Bloomquist explains, “Our decision to go back was just because this is what we do for a living. You never know how long it could be drawn out. Those fans, wanted to see us race.”

Together, they tried to fight it. The first judge threw it right out of court. Safe to say that particular judge didn’t fully understand the situation.

It wasn’t something that deserved to be thrown out. At the very least, they had a case. After the initial lawsuit being tossed from court, the same drivers, minus Brandon Sheppard, collectively formed an appeal. As of this month, 11 full months after the race at Eldora Speedway, they’ve officially given up on that appeal.

It’s just a shame that you have to roll over for somebody.

Driver and/or entire team suspensions aren’t good for this sport. Especially when that ban is a rule related to a judgement call. Yet, in dirt racing drivers, teams and even tracks are suspended far too frequently. While talking with Scott I drew the comparison to NASCAR. A racing series where crew chiefs, not drivers, are often suspended for rule infractions.

Meanwhile, aside from blatantly dangerous on-track actions, fans aren’t going to show up to a NASCAR track, missing the opportunity to see their favorite driver. NASCAR doesn’t punish their fans, they punish the teams exclusively. Driver suspensions exist in NASCAR, they are just extremely rare. 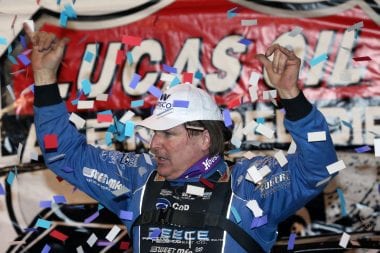 Scott Bloomquist comments, “NASCAR’s generally right, when they do that. Even then, they’re not foolish enough to suspend competitors. It doesn’t matter if you’re a fan favorite or not. There’s still people that like to come watch you race and be part of the program.”

Scott concludes, “It’s not good for the series either. You help support the race program. You pay to get it in, you pay for the entry fee’s. It supports the racetrack and the series.”

In dirt track racing, it would far more difficult to enforce crew-chief suspensions. That’s likely the reason we don’t see it in dirt racing. However, suspending drivers isn’t the right alternative.

Jason Feger’s solution is basically to fine the teams, not suspend them. It’s an alternative way to enforce the rules. These are still small teams, fines are a deterrence enough for dirt late model teams to follow the rules. The difference is, the fans don’t have to wait a full year to see their driver return to the track.

Scott Bloomquist comments on the WRG suspension; Driver has passed a LOLMDS test