The NASCAR Xfinity Series is currently under rain delay at Daytona International Speedway. A decagon match is set to take place as the rain falls at the speedway.

The NASCAR Xfinity Series drivers are out of their cars. As they wait out the rain delay. The pit crews, drivers and NASCAR fans have gathered at the NASCAR decagon where a cage match is set to take place.

Ahead of the Professional Fighters League match, Brendan Gaughan has an idea… 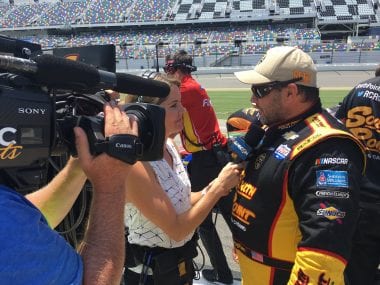 Is Brendan Gaughan into any MMA stuff? He states, “Absolutely. This is a brand new league debuting. The people that own a different one are friends of ours.”

As the topic switched from the NASCAR race to the cage match. The NBCSN ties the two sports by highlighting all the NASCAR fights over the years.

Gaughan, “You show all these fights. You didn’t show my old one’s, but there hadn’t been any new one’s in awhile. Nobody wants to step into my weight class?”

Last year he stuff teammate Brandon Jones into a trash can. “It took one arm and a pinky to get him up.”

Gaughan wants a ring at all NASCAR races

“I do love racing this stuff and it is cool to have a fight here.”

“If NASCAR really wanted to solve problems… The way I’ve always wanted to solve the NASCAR problems we have. I would love to keep that ring. Every week, Mike Helton anybody… Keep the ring!”

“After the race, we get to go in there and solve any differences. And it would be over!”

How does teammate Brandon Jones feel about the idea, “I would not step foot in the ring with Brendon Gaughan. He would destroy me. I can’t be in a cage with him. He’s an animal.”