Tonight, the Lucas Oil Late Model Dirt Series heads to the home of NASCAR. They unload less than an hour from Charlotte, NC. It’s the Lucas Late Models at Cherokee Speedway in Gaffney, SC.

Right on cue, Scott Bloomquist rolls into the speedway at 7:12. Twelve minutes after the drivers meeting was scheduled to get going. 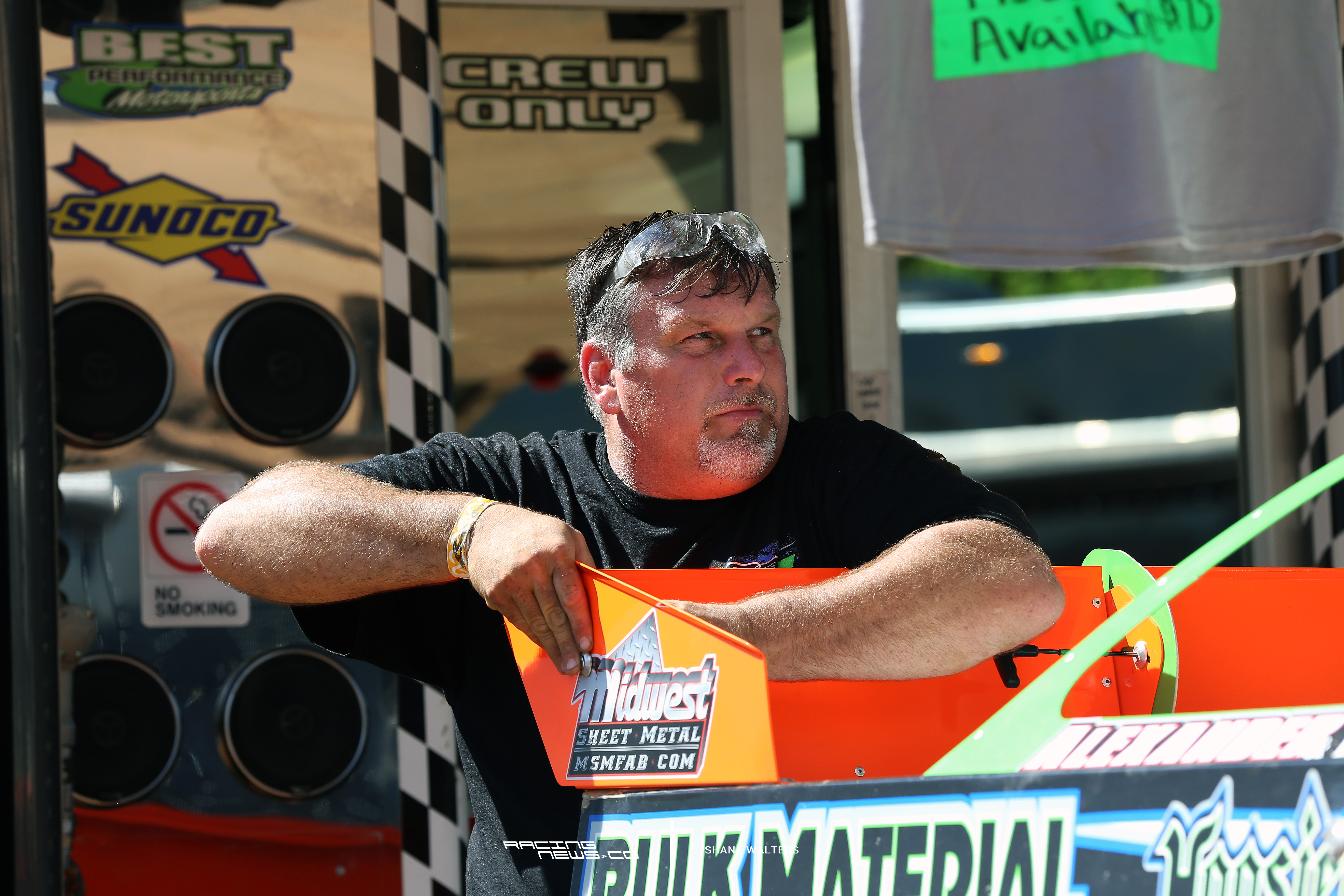 There’s a new point leader tonight at the 3/8 mile high banked dirt oval track in South Carolina. Last night, Josh Richards took the points lead from Scott Bloomquist. The orange spoiler has been installed and teams are ready to get going.

Brandon Overton set quick time in Group B qualifying at 15.408.

Hudson O’Neal had issues on his warmup lap. He couldn’t get going. On his hot lap, he put it in the wall. Looked mechanical.

Bloomquist to lead. O’Neal is around Richards. Pursley is in trouble. Caution.

Green. Richards is around O’Neal. Tim McCreadie is moving through the field on the bottom. Bloomquist wins heat 1.

Heat 2
Last nights winner, Chris Ferguson and Ross Bailes set the front row in heat 2. Green. Ferguson slides to the top, Bailes has to checkup. That allows Earl Pearson to diamond off the exit and slip under him out of turn 2.

The next lap, Bailes comes back. Same move in reverse. Bailee back up to 2nd. He hangs with Ferguson but it’s not enough. Ferguson wins heat 2. Davenport and Overton run side by side into turn 1. Not sliders involved.

Overton gets around him on the bottom. Davenport runs it deep on the inside of turn 1. He pulls even.

They continue to run side by side. 1 lap, 2 laps. Davenport finally pulls clear of him on the inside at the exit of turn 4. Right in front of the crowd. They were fairly excited.

Heat 4
Jimmy Owens and Boom Briggs setup the first row in the 4th and final heat. Owens gets the jump on the field.

Boom Briggs back to third. He has more pressure behind him but he gathers it up and sets sights on 2nd. Briggs re-claims 2nd but Owens is gone. Jimmy Owens takes the win in heat 4.

B Main
Tim McCreadie slides Darrell Lanigan in turn 1. He takes the lead and drives off to the win. 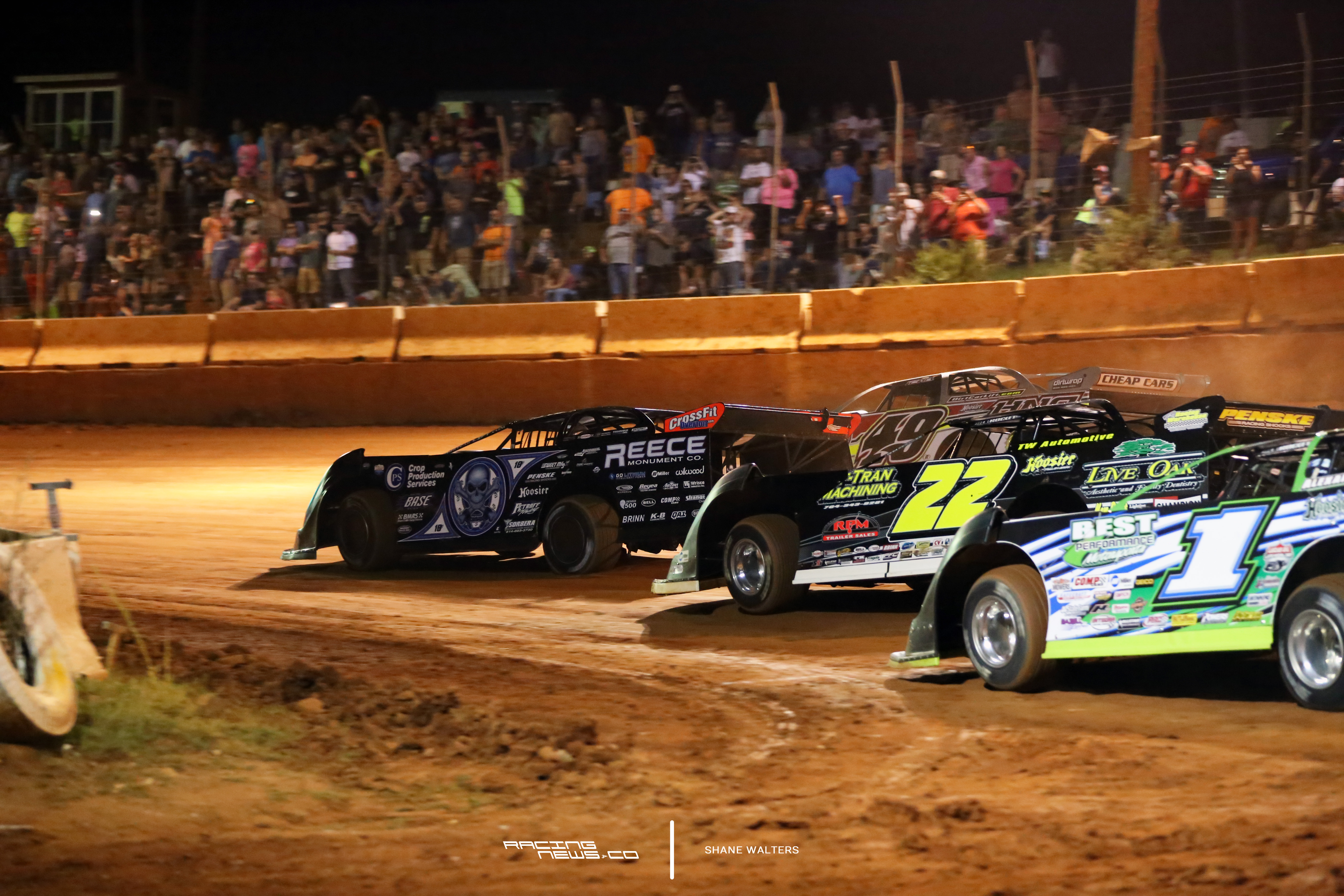 Main Event
The field gets set for 50 laps around Cherokee Speedway. Off in the distance, lightning strikes.

Scott Bloomquist and Chris Ferguson lead the field into turn 1. Jonathan Davenport slips by the both of them out of turn 2. New leader, the crowd erupts.

The field runs along the bottom in 3-4. Bumper to bumper, no passing there. The action is in turns 1-2. Multiple grooves there.

Bloomquist is beginning to run down Davenport. He’s back to his bumper. Caution. Lap 19. 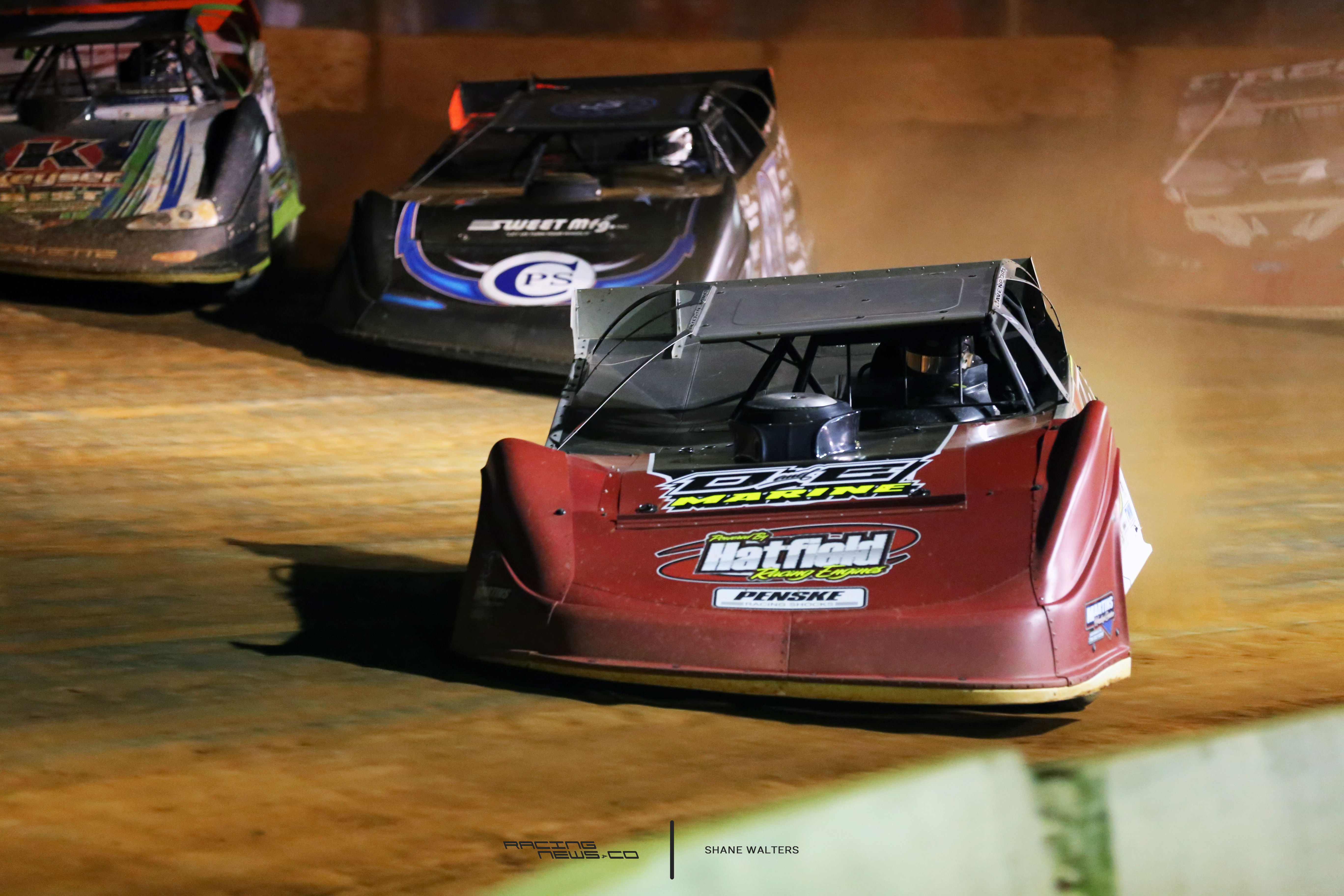 Green. Josh Richards to the outside of Bloomquist. The zero is caught by surprise, he’s forced to get out of the gas, completely. The car drops off the bars as the field drives by Bloomquist off turn 2. Bloomquist falls outside to 4th. Move Richards to 2nd.

Josh Richards is all over the back bumper of Jonathan Davenport for the lead. But it’s going to be hard to pass.

Meanwhile, Behind the leader, Brandon Overton is trying to make things very exciting. He’s the only one bouncing it off the cushion.

He prefers the low side, but he’ll go high to make a pass. He’s the only one doing it. As everyone else runs low and through the middle in 1-2 he claims a lane to himself.

Move Overton around Bloomquist for 3rd. But he’s not done. Josh Richards is next. As Richards rides in the tire tracks of Davenport, Overton goes back to the top. 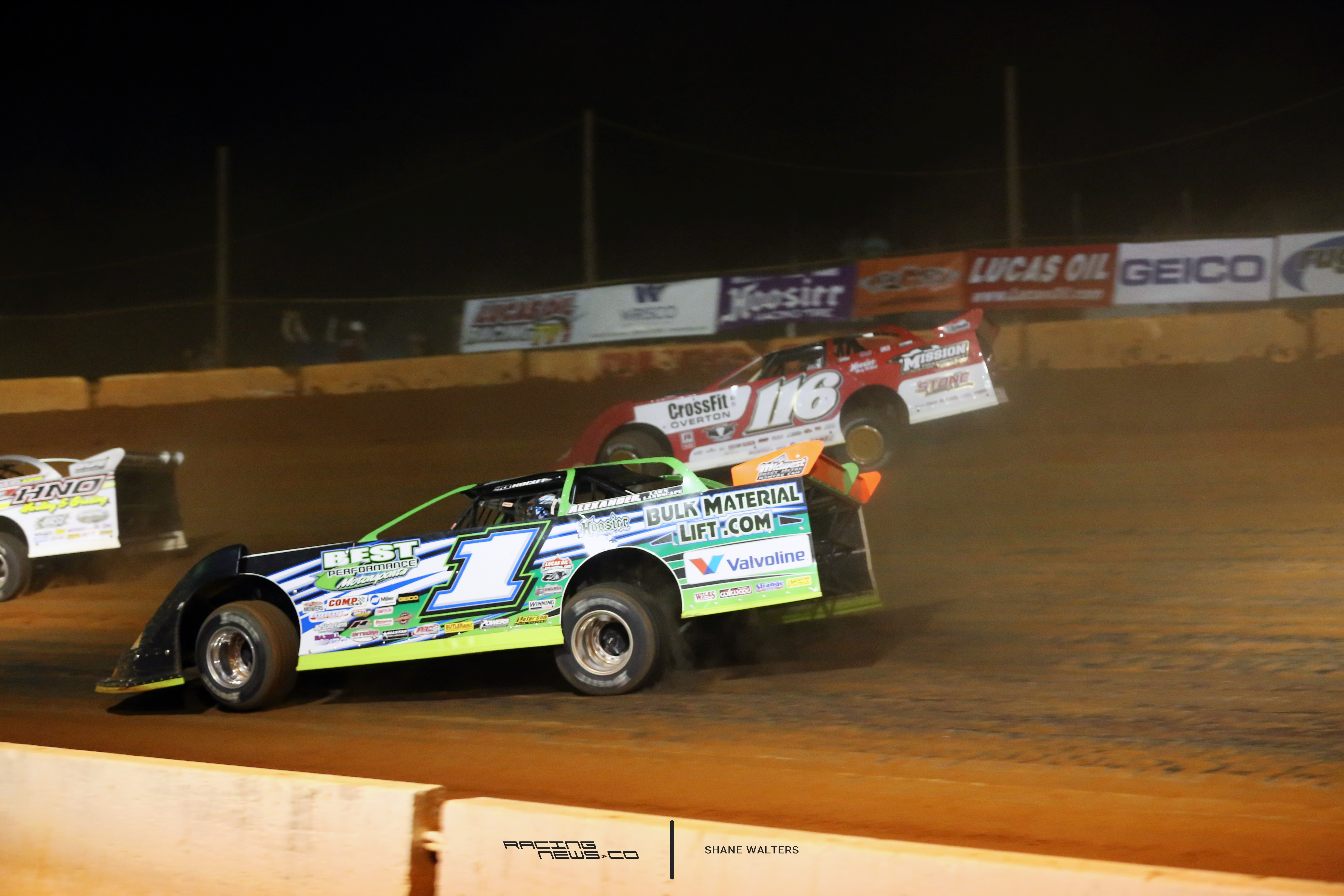 He’s even with Richards, side-by-side. Jonathan Davenport drifts up the track on the exit of turn 2. Possibly trying to take the line away? Overton diamonds the center of turn 2. He drives down the banking, to the middle. 3 wide at the exit of turn 2 for the lead.

Overton carries the momentum all the way down the back-straight. New leader in turn 3, Brandon Overton.

This time, Overton stays up top. He’s took the lead there, he’s going to stay there. The rest of the field continues to run the bottom.

Trouble turn 1! Jonathan Davenport is heading backwards into turn 1. He loops it, slides backwards and spinning up the banking. It whips around and hits the wall with the front end. Davenport is done. I have no idea how that happened.

Just a few laps to go. The field will get another shot at Overton. Overton clears the field on the restart. No challengers. But Overton has a tire going down! Slow leak. Just one lap to go. Nearly flat tire, he continues to pull away.

Brandon Overton wins at Cherokee Speedway and puts on a thrilling show for the South Carolina crowd! 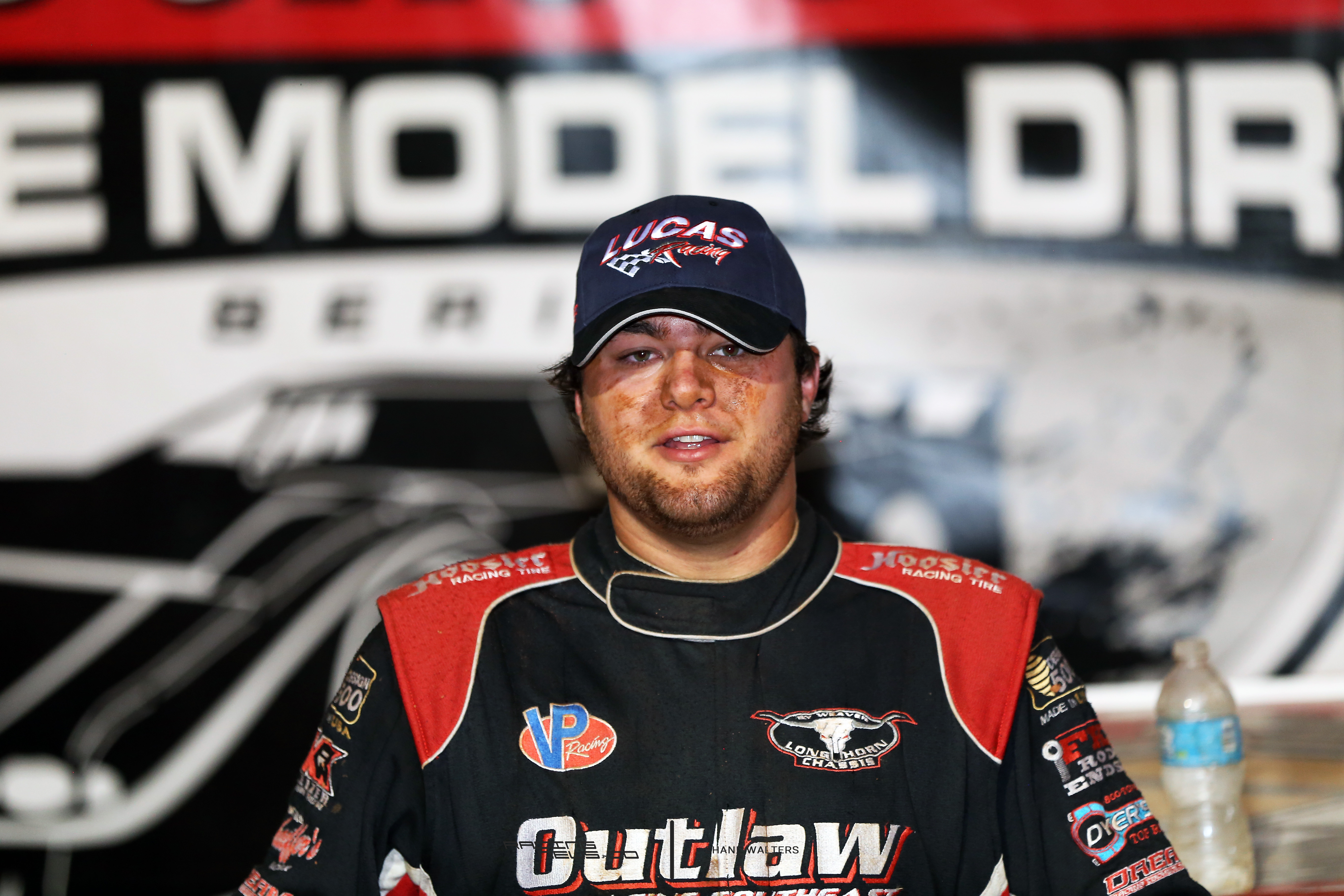 The winner, Brandon Overton, pulls into victory lane. The left rear tire is on the rim. He pulls off the helmet, climbs from the car and reveals his ‘Days of Thunder’ face. Dust and dirt cover the face of the winner in victory lane. That’s awesome, old school victory lane at the dirt track in South Carolina.

Tomorrow night is the final night of the weekend tour. Saturday night, the Lucas Oil Late Model Dirt Series heads to Smoky Mountain Speedway in Maryville, TN. Following tomorrow night’s program in Tennessee, the drivers get a week off.

The LOLMDS returns to Tri-City Speedway in Pontoon Beach, IL on July 14th. The field will will be racked again, in Missouri, on July 15th at Lucas Oil Speedway.