Last night at Tri-City, mechanical issues continued for Scott Bloomquist. His rival, Josh Richards, drove it to victory lane. The two drivers were separated by 20 points heading into last night’s program. Tonight, the delta between 1st and 2nd in the standings is 140 points with Josh Richards at the top of the board. 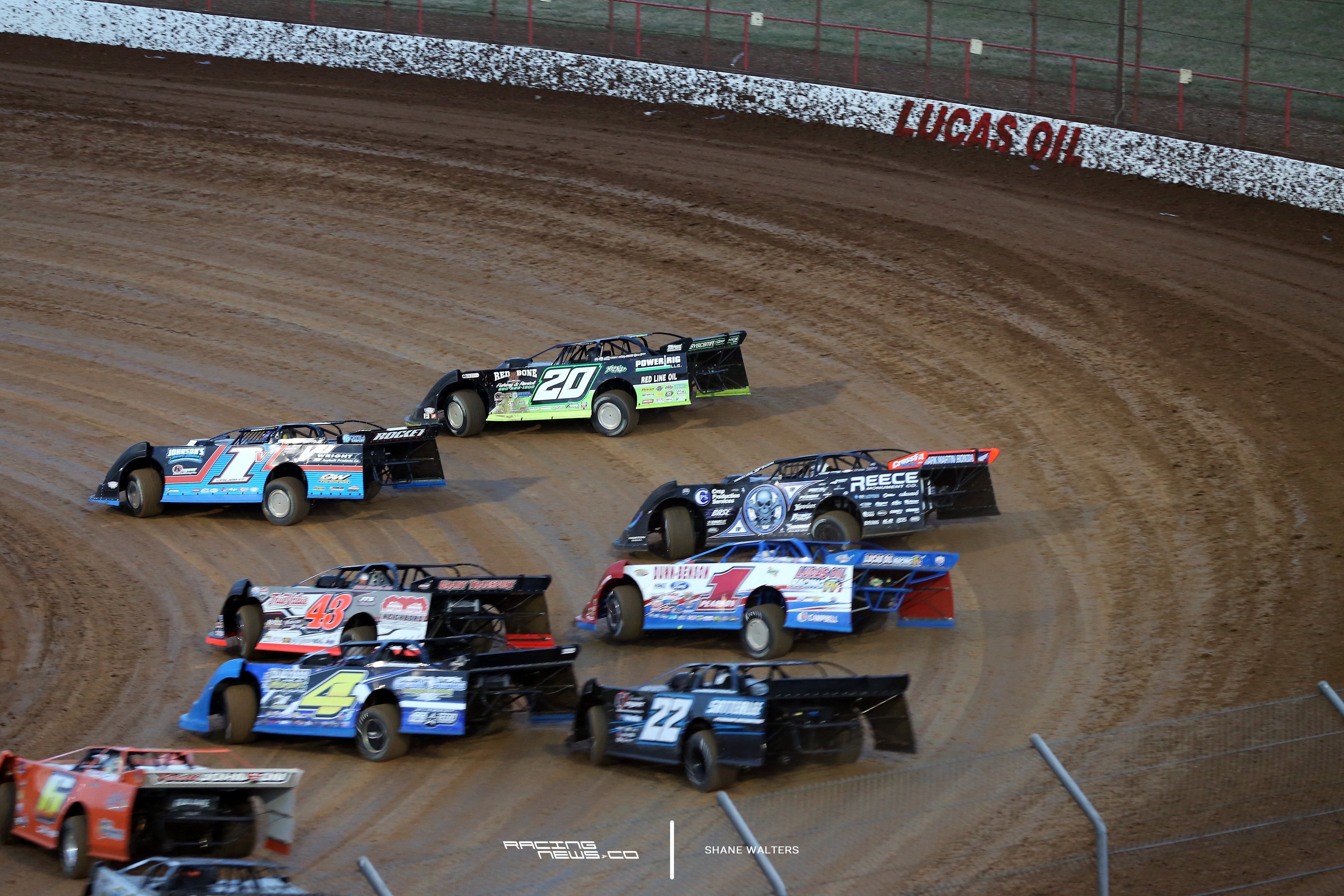 Heat 1
Jimmy Owens and Vaught setup row 1. Its Jimmy Owens out of turn two. The stack up nose to tail at the front.

Bloomquist is making a charge. He’s battling Earl Pearson Jr for 2nd. It’s short lived. Bloomquist loses a bunch of ground to Pearson. They are all over his for 4th at the checkered flag.

Tim McCreadie started at the tail. By lap 3, he’s up to 5th. He’s clicking them off high and low. Doesn’t matter, wherever they aren’t, McCreadie goes. 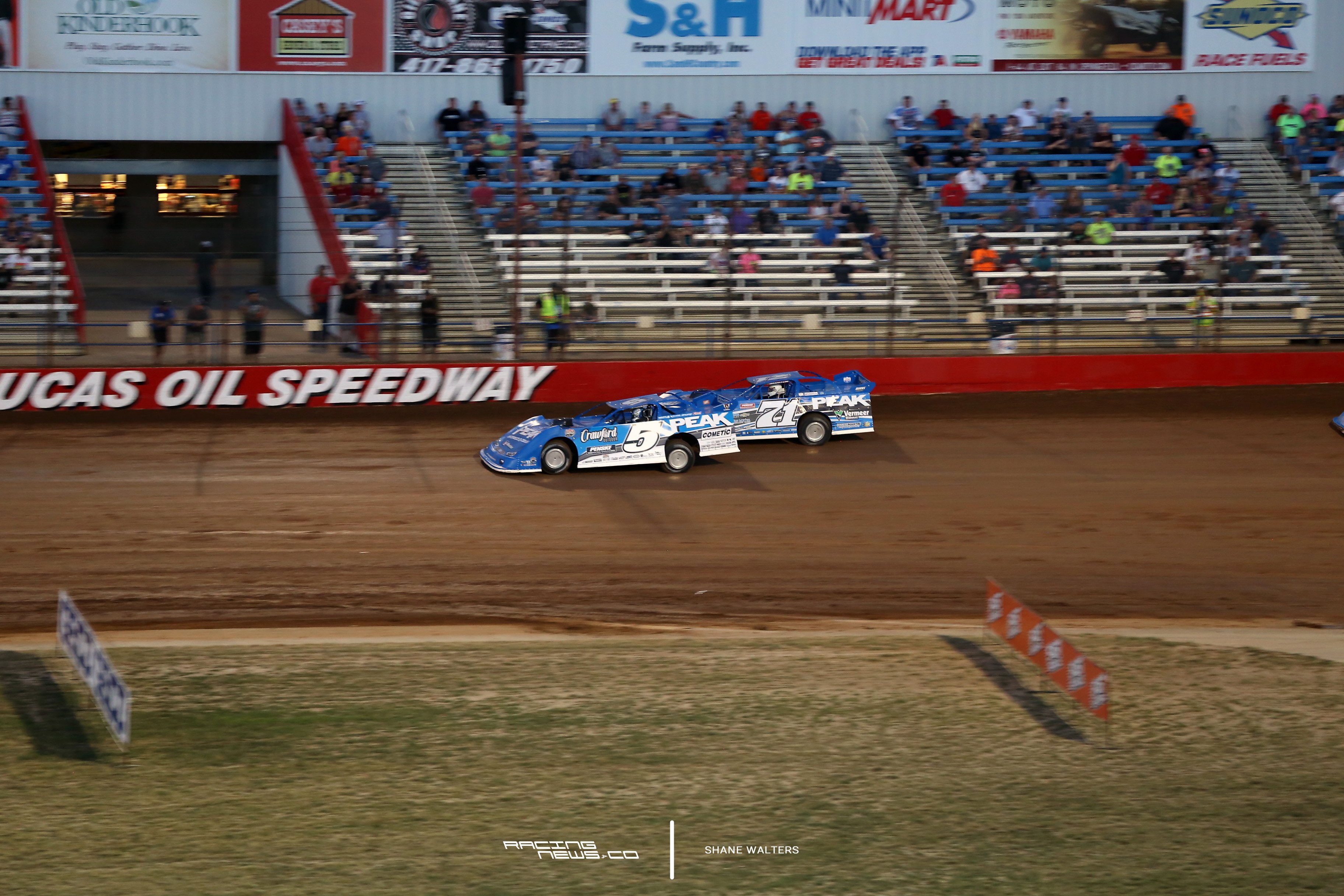 Heat 3
It’s an all O’Neal front row. The real deal and the new deal lead the field into turn 1. Hudson O’Neal goes high. He carries a ton of speed off the high side and down the back straight. Hudson started to stick his nose to his outside. Unsure if his dad would leave him room he back out.

Don O’Neal begins to drive away. The race is for 2nd. Hudson O’Neal, Jesse Stoval and Brian Shirley each pick their own lane and race it out.

Hudson is going to get another shot at the win! He drives it in low and hard in turn 3. Slide job for the lead! 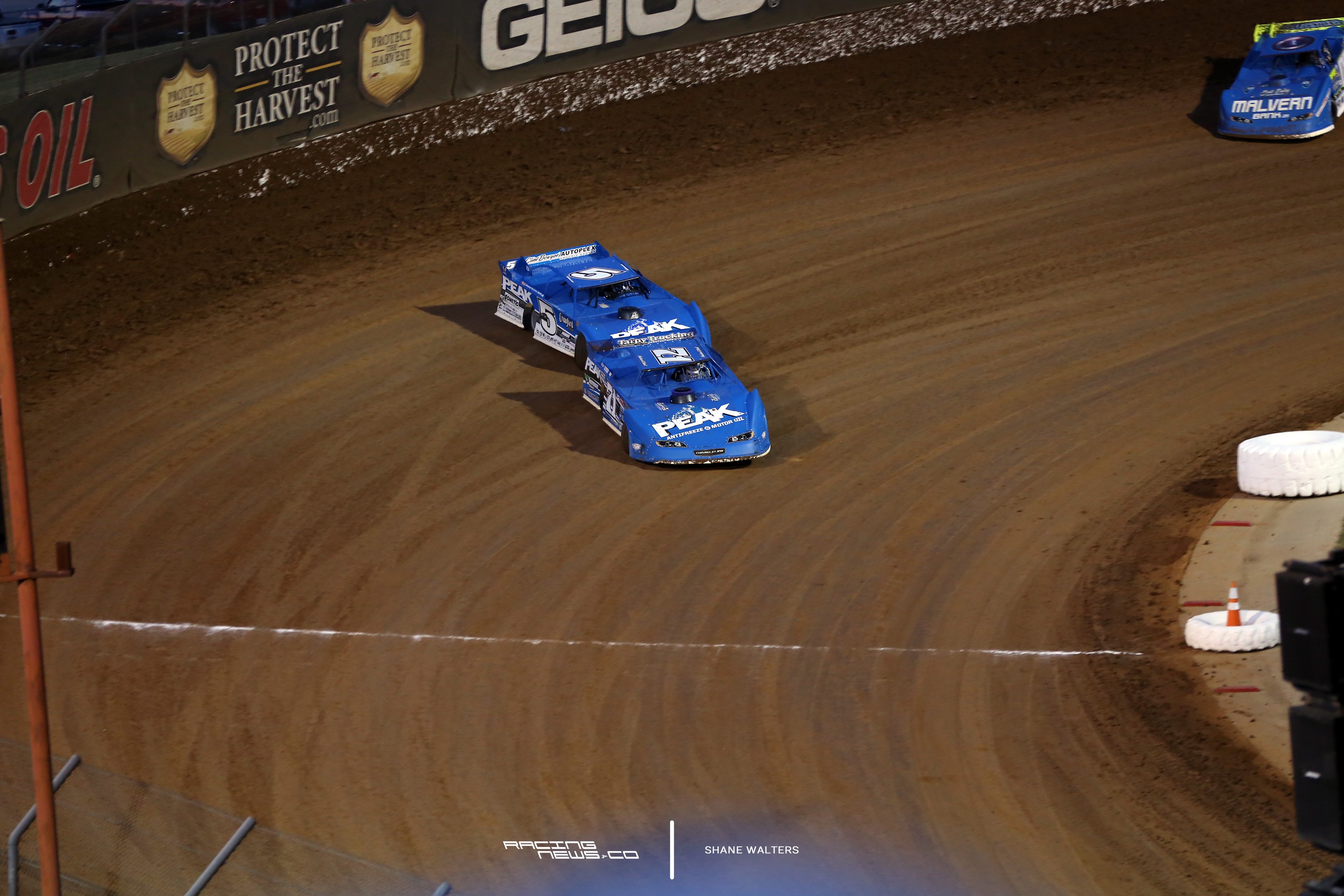 Don O’Neal crosses him on exit. Last lap, Don takes the lead back in turn 1. Hudson hits the cushion. It’s a reply of lap 1. This time Hudson O’Neal puts his nose to the outside and leaves it there. He’s got it.

Hudson goes high in 3-4. Don low. They come off the final corner. Side by side! At the line it’s Hudson O’Neal by 3 feet!

Richards looks anxious. He looks under Erb at the exit of two. That won’t do it. Richards drives to the high side in 3. Erb and Richards run side by side. Lap after lap. Caution. 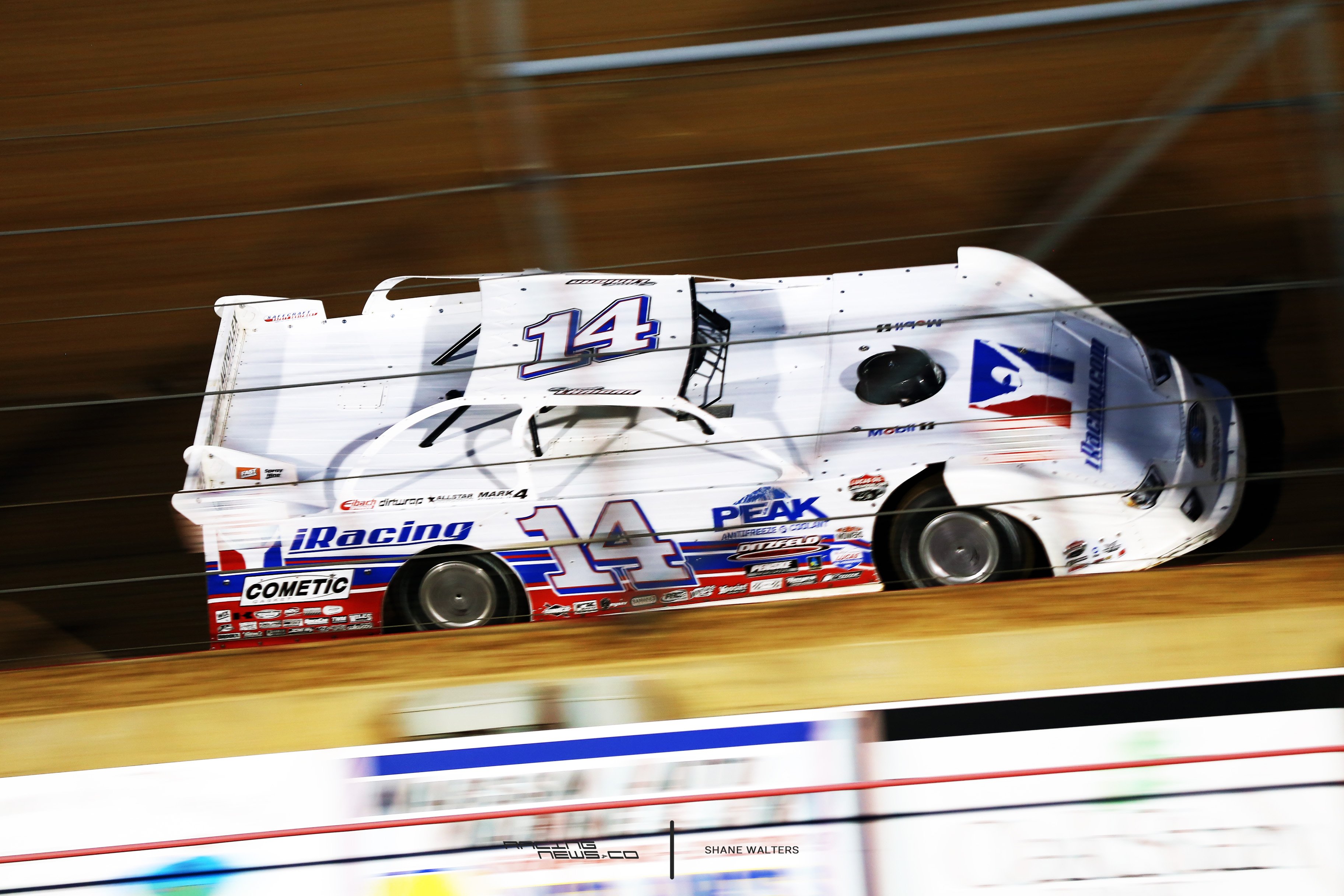 Green, Lanigan drives away. Richards jumps right to the top. This time he gets it done. Richards carries the high side momentum on the outside down the back straight. He confirms the position in turn 3.

Richards sets sights on Lanigan. He’s there. Lanigan moves up a lane. He was running the bottom. He likely hears Richards coming.

They come off turn 4, nose to tail. Darrell Lanigan nips him at the line. He wins the 4th and final heat. 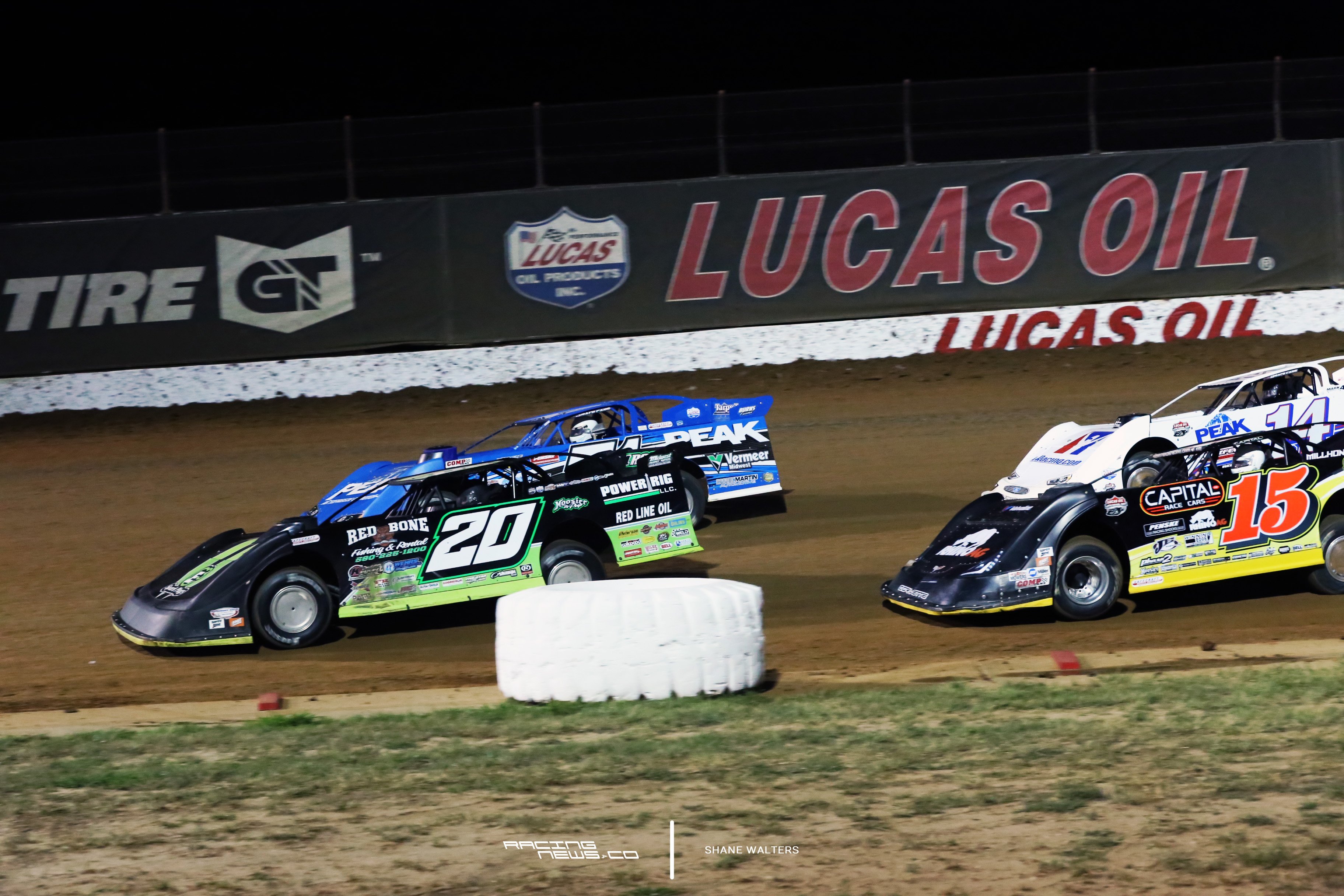 Jimmy Owens gets the early jump. Hudson O’Neal settles into 2nd. But Hudson isn’t settled at all. He hasn’t left the cushion. Hudson continues to jump over the cushion small mistakes.

Josh Richards is climbing through the pack. He’s high, low. He all over and flying through the field. Meanwhile, Jimmy Owens is checking out on Hudson O’Neal.

Richards is around Don O’Neal for 3rd and now he’s looking under Hudson O’Neal for 2nd. He takes it at the exit of turn 2. Move Richards to 2nd. That quick.

As the O’Neal’s race side by side-by-side for 3rd. The leader, Owens, is deep in lapped traffic.

Brian Shirley is holding up Jimmy Owens on the high side. Owens could go low, the lane is open but he’s glued to the high side. Josh Richards is rapidly reeling in the leader.

Richards rolls around the bottom. There’s a little moister left down there against the tire barriers. Owens continues to be locked to the back bumper of Shirley, they both run high.

Lap 50, still no caution. The track has slicked over. Most run the bottom with the exception of a handful, including the leader. 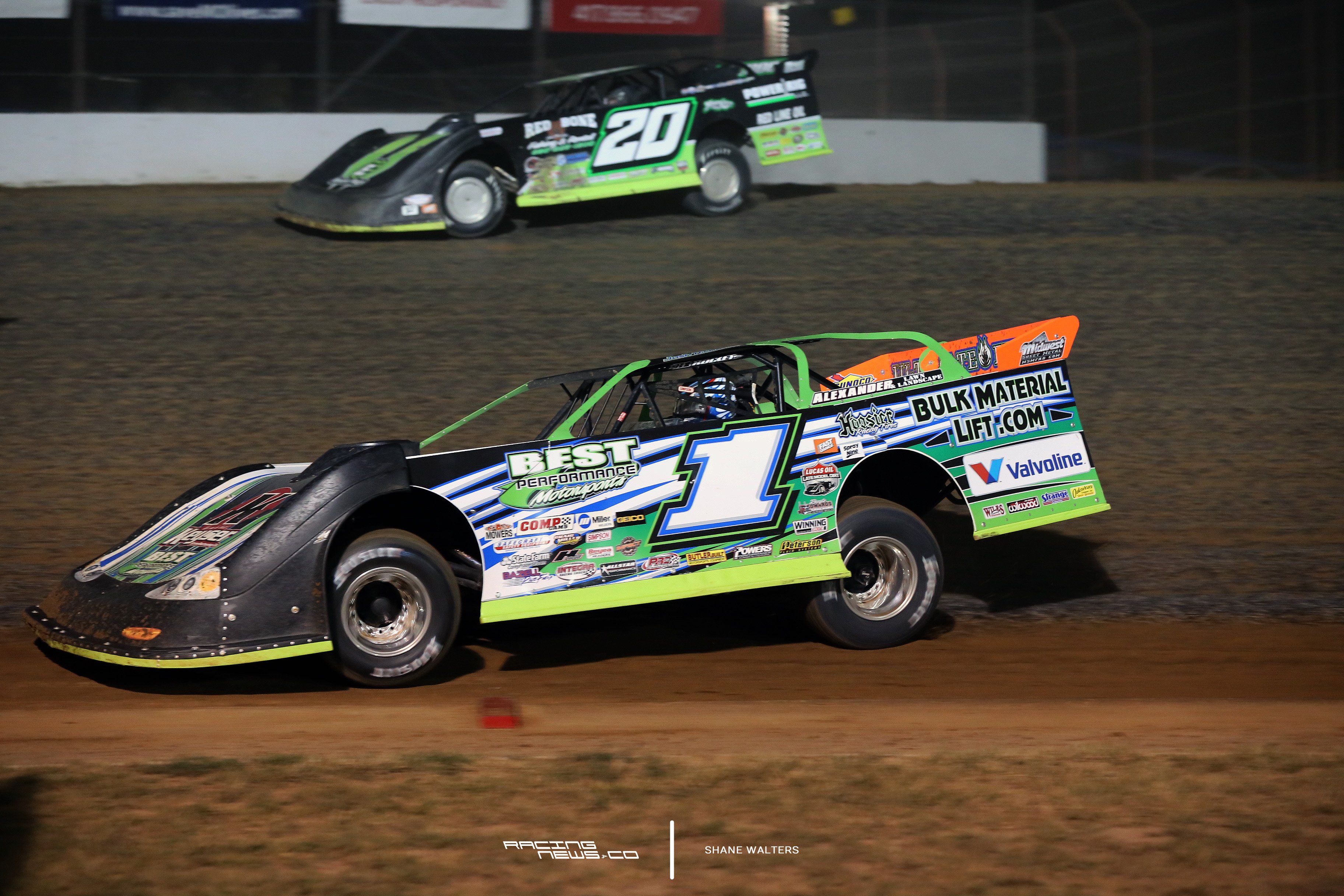 In no time at all, Richards is there. The battle for the ring and the Diamond Nationals win is here.

Josh Richards has the bottom lane to himself. He drives right by Owens and then the lapped car of Shirley. New leader, Josh Richards.

Lap 57, trouble! Jimmy Owens has jumped the cushion. He’s in the wall and stopped at the high side in turn 3.

Back green. Josh Richards drives away. He has no pressure from behind. 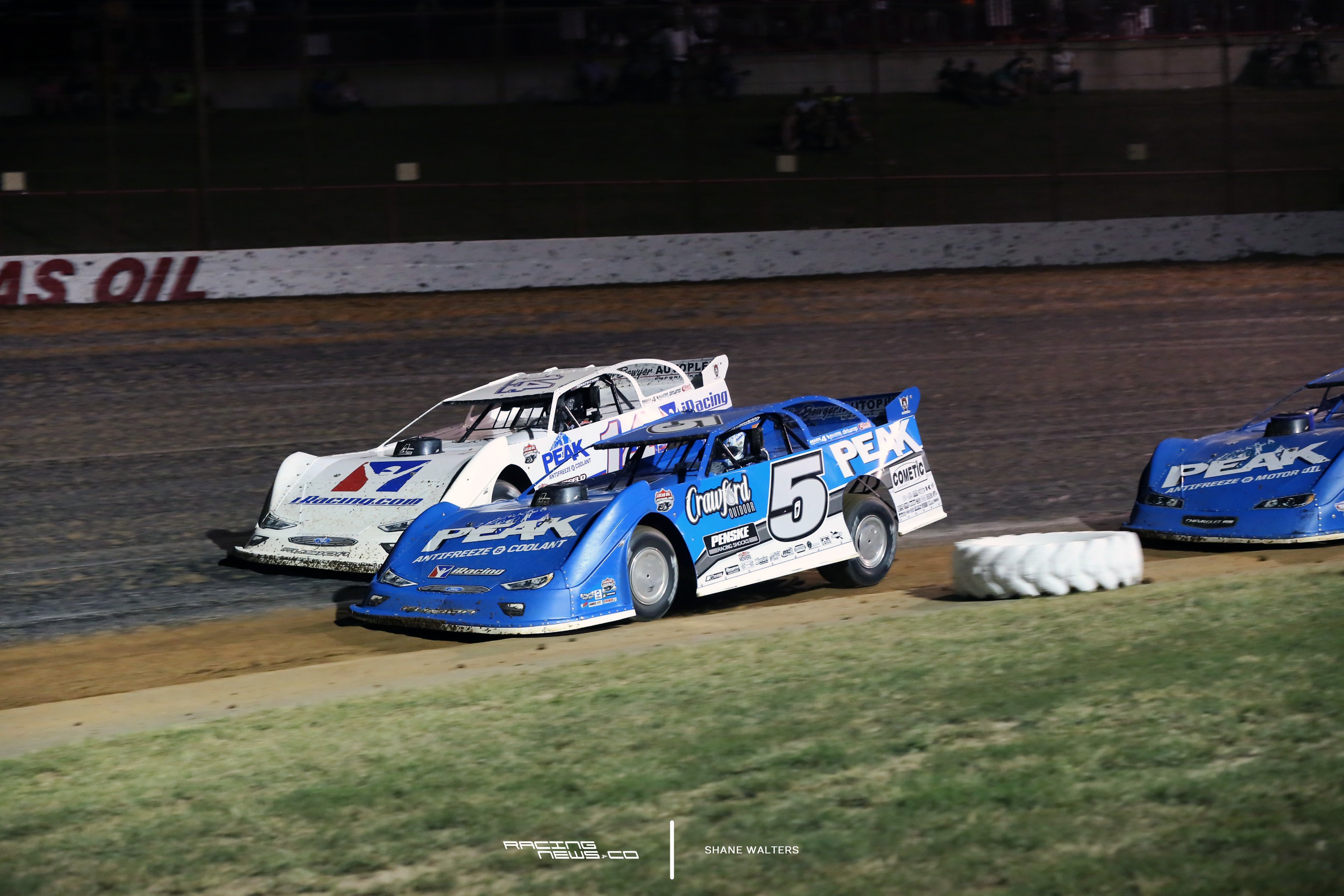 But the battle is on for 2nd. Don O’Neal and Hudson O’Neal run side-by-side, again. But as the O’Neil’s fight for the bottom, Darrell Lanigan see’s an opportunity. He takes it through the middle in turn 3 to the outside of the both of them. He nearly drives from 4th to 2nd in one corner. However, Don O’Neal holds onto 2nd down the front straight-away.

At the front, Josh Richards has it on cruise control. 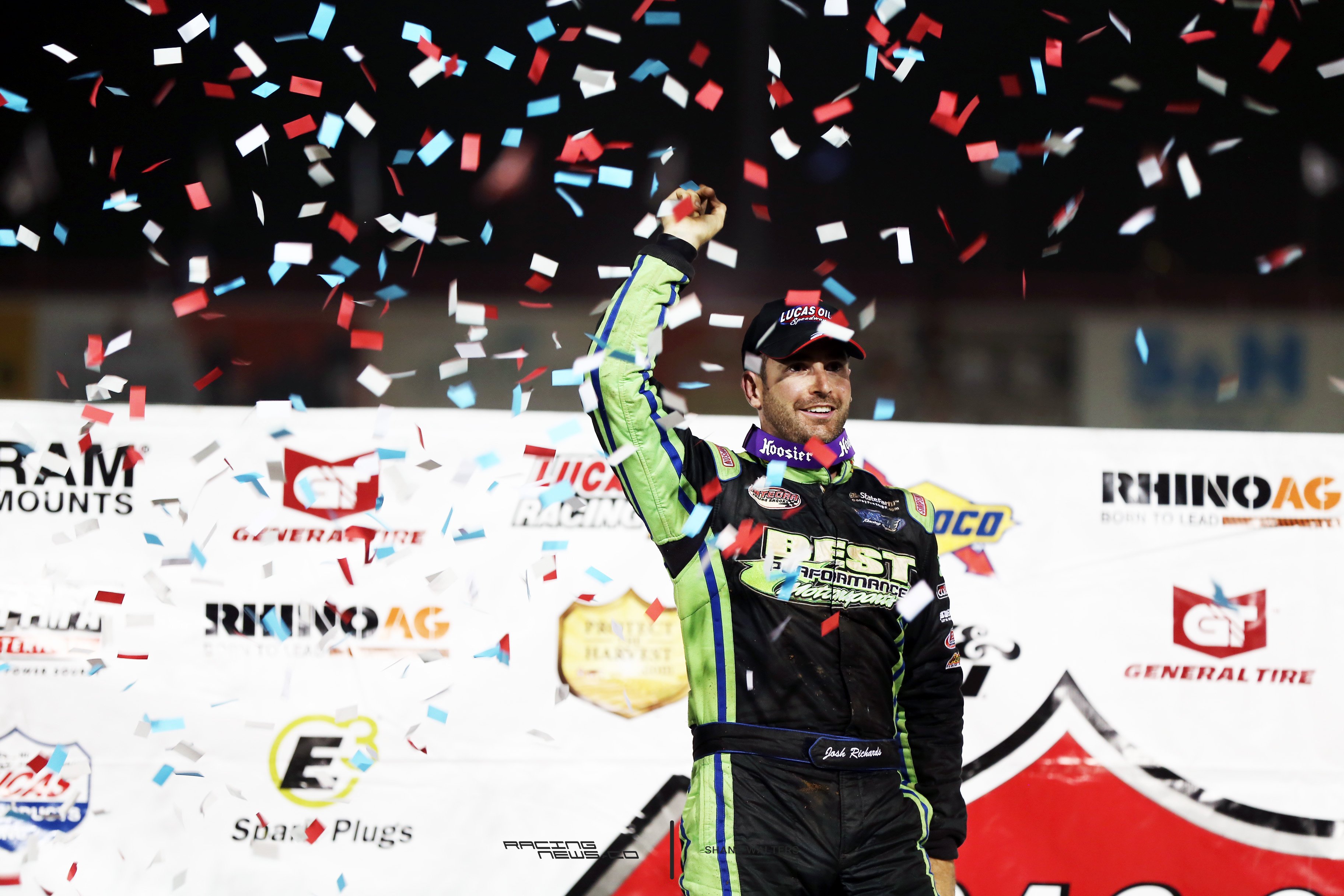 Josh Richards comments on the night, “We weren’t very fast in hot laps or qualifying. We basically went with the same set-up as last night, and then we made some adjustments.”

He continued, “We weren’t that great at the beginning, but the longer the race went, the tires on the car felt good; I hate it for Jimmy though. I saw that he tried to get back by me on the outside and he got up close to the wall and the car must have stalled or something.”

The Diamond Nationals winner concluded, “Jimmy was pretty good early, and he was so far out there, but he eventually came back to us. We just have to focus on being fast, the last two nights helped a lot. It can turnaround in a heartbeat.”

Don O’Neal ran 2nd tonight, “We still have some work to do to catch the number 1 car, but we are getting there. We have a third last night and a second tonight, so we are getting close to having this Peak Antifreeze and Coolant and Cometic Gasket car back to Victory Lane.”

Don O’Neal is running a new car, “We keep coming up short, but we have got to keep digging. We were good out in the open and with traffic. This was a new car last night and we are happy to keep getting these podium finishes. If we keep running like this, the wins will come.”

Lanigan is also running a new car, “Tonight was a good night for the Clint Bowyer team. On that final restart, I thought I could roll the top and go by those guys ahead of me, but it just didn’t work out as I had planned.”