Related: Here’s what you need to join iRacing

I’ve seen a lot of matte cars. They all look great. Every time. But why?

Matte is special because it doesn’t reflect. Alternatively, Shiny cars pick up the colors around it, including light and surrounding objects.

If a shiny white car is racing on a dirt surface, the brown dirt surface will be reflected into the shiny white. That essentially dims the true color. Basically the reflection would make it appear less white.

Alternatively, matte doesn’t reflect or pick up colors from it’s surrounding, it’s as true white as you can get. It’s striking. That’s exactly what you get with Darrell Lanigan’s new matte wrap.

Excitedly, I had questions. So, I asked the driver…

Is it a totally new car or just a new skin? 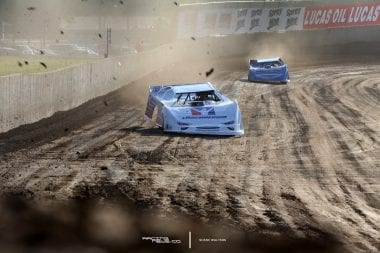 Darrell Lanigan states, “It’s a new car. Everything on it”

He continued, “They’ve been wanting to do a white car for awhile.” Who’s they? “Clint and Casey”

What do you think about it?

Did you change a lot of things on the car?

Darrell Lanigan explains, “It’s a little bit different that we came out with. Jackson’s got another one just like it. We’re just trying some stuff to get a little bit better.

Apparently, it’s not just a new look at all. It’s a completely new version of the Club 29 chassis.

The all-new white iRacing dirtcar features the same scheme design scheme. The base color has simply been reversed.

Darrell Lanigan was running near the top 5 at Tri-City Speedway last night. However, the #14 suffered from mechanical issues late.

Unfortunately, the matte white dirt late model ended it’s debut early. Those kinds of things are generally expected anytime you roll out a brand new car. The bugs still need to be worked out.