The announcement comes in advance of the highly-anticipated release of iRacing’s dirt track racing feature that will enable iRacers to race digital late model, sprint and legends cars on legendary dirt tracks including Eldora and Williams Grove Speedways. 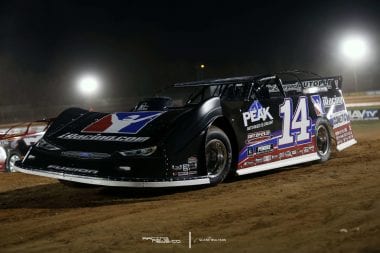 “We are excited to sponsor Clint Bowyer Racing and Darrell Lanigan for the 2017 season,” said Tony Gardner, President of iRacing.com.

He continued, “Not only are we sponsoring the car, but it is the actual dirt late model that we modeled for iRacing.com.  It was great working with them to laser scan the car, gather physics data and actually work with the team to build the simulated version of the car.

“Along with the nearly 65,000 iRacers around the world, we’re really looking forward to our dirt racing feature, and I’m sure the Clint Bowyer Racing dirt late model will be a hugely popular addition to our existing inventory of NASCAR, IndyCar, Formula One and sports cars.”

“There is a LOT of new to spread around in 2017,” said team owner Clint Bowyer.

He continued, “Our dirt program is no different.  We’re very excited to bring aboard iRacing.com and look for a successful year with them.  ‘Dirt’ will be an exciting addition to their already first-class lineup.  It’s been a pleasure to work with them in development of the game and we look forward to hearing feedback from the fans!  Our guys have worked hard this winter and hopefully Victory Lane is right around the corner.” 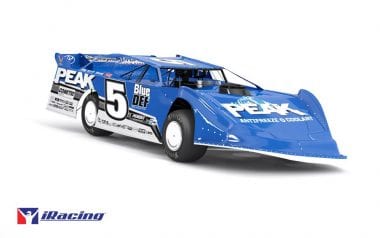 Lanigan will once again be joined by teammate Don O’Neal in the No. 5 Peak Antifreeze and Coolant dirt late model.  CBR will see two cars compete for the 2017 LODLMS Championship.

In addition to the Championship schedule, the teams will also compete at numerous other events in 2017, including the dirt late model “Dream 100” and “World 100” at the historic Eldora Speedway.

“I’m very proud to be able to announce another great partner for our dirt program.  The fact that we are able to field these teams with great support says a lot about them and the hard work we put into it to try and provide value both on and off the race track,” said Bowyer.

To learn more about iRacing and to take advantage of 50% special offers go here:  http://www.iracing.com/

To find out more about Clint Bowyer Racing and the 2017 season, be sure to check out clintbowyer.com, Twitter @bowyerdirt, @clintbowyer and Facebook-Clint Bowyer.

How involved is Clint Bowyer with his dirt team?