Tonight, the Lucas Oil Late Model Dirt Series heads West on the map, from SC to TN. The tour unloads at Smoky Mountain Speedway in Maryville, TN. The track is a high banked 4/10 mile clay oval. 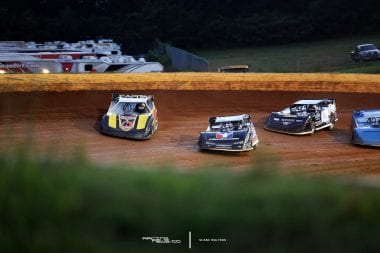 Heat 1
Darrell Lanigan and Ray Cook lead heat race number 1 to green. Lanigan on the inside, cook outside.

Green. The outside prevails. Cook works around Lanigan on the outside. To the lead as Lanigan falls into 2nd.

Lanigan finds a groove on the bottom. He’s running a bit lower than the leader and chasing him down. But he can’t find room to get by. Ray Cook takes the heat 1 win. 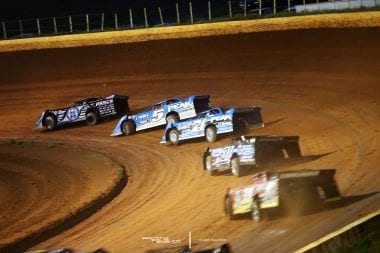 Heat 3
The Tennessee boys line up on the front row. Jimmy Owens and Scott Bloomquist on row 1. Jimmy Owens gets the jump. He leads out of turn 2.

Tim McCreadie is in trouble. He washes up the banking. McCreadie’s in the loose stuff, can’t put the throttle down. A bunch of cars go by.

Hudson O’Neal is looking to take 3rd from his dad. He’s under him but Dad shuts the door in 3. 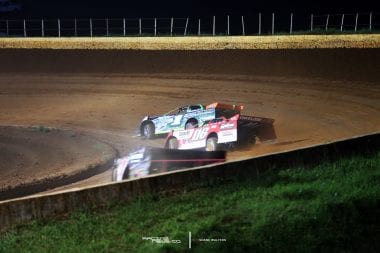 Richards powers around the highside. He carries that momentum down the back straight-away. By the time they get to turn 3, new leader. Josh Richards sets the pace in heat #4.

Overton gets right to his bumper then begins to fade. Richards drives away to win the 4th and final heat. 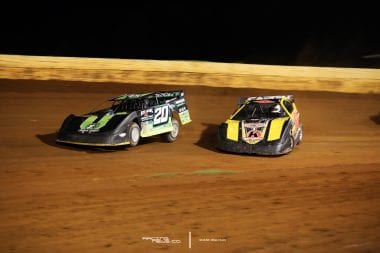 Green flag, Jimmy Owens gets the jump on the Outside. He begins to drive off.

Josh Richards is all over Cook for 2nd. He’s to the inside at turn 1. Gases it at the center of the corner, drives up the banking in front of Cook and takes his line away. Move Richards to 2nd. Caution, lap 5

Next stop, Earl Pearson Jr. He gets around him too. He’s not done, Ray Cook is the next one to drop. Bloomquist to 3rd by lap 25. 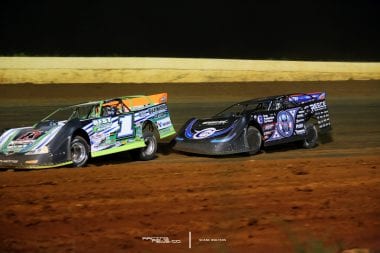 Bloomquist begins to chase down Richards. This isn’t only a battle for race position. This is the championship battle, they are separated by just 20 points heading into tonight’s event.

It doesn’t take too long. In a matter of 10 laps Bloomquist is all over the back bumper of Josh Richards.

However, they have both opted to run the low grove. Bloomquist has nowhere to get by clean.

Meanwhile, Bloomquist isn’t the only one on the move. Overton is back there clicking off qualifying laps. Again, he’s doing it on the highside. Bouncing off the cushion. That’s where the other cars aren’t. 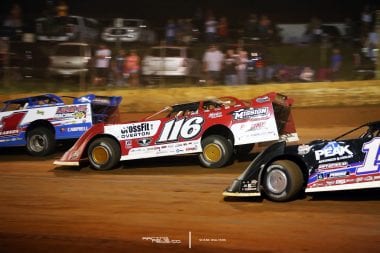 If a car takes his line away he just turns it to the bottom, drives down the banking and cuts under them on exit. He can go anywhere he wants. Overton looks to have the fastest car on the track at the moment.

In fact, he’s caught Josh Richards and Scott Bloomquist. Just as soon as he catches them, he’s around them. Move Brandon Overton up to 2nd with just 10 laps to go.

Bloomquist clicks passed Richards shortly after the move by Overton.

However, at the front Jimmy Owens is long gone. He’s trying to lap the field.

Jimmy Owens takes the win at Smoky Mountain Speedway in the Moonshine Classic! 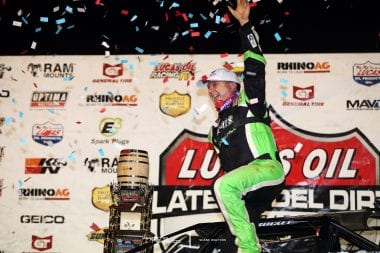 From victory lane, “Man, I can’t thank my crew enough, they have worked their tails off on this car. We have been away from home the last week or two and we needed to get things sorted out. It’s good to know a lot of hard work has paid off. Thanks to Shannon and Jeff for making this car go.”

“Without the fans we are nothing, they are what makes this sport great. We love them all and appreciate their support over the years.”

The winner spoke on the weather and the track, “The track was in great shape; the pits, those I am not so sure of, and we may have the hauler stuck out there. But after the rain they had this afternoon it was good to see the sunshine and the great crowd on hand. I didn’t want to see a caution after that first one they had. I am glad I didn’t have to contend with the 116 [Overton] car at the end.”

The LOLMDS returns to Tri-City Speedway in Pontoon Beach, IL on July 14th. The field will will be racked again, in Missouri, on July 15th at Lucas Oil Speedway.