Tonight, the racing action concludes at I-80 Speedway in Greenwood, NE. It’s the final night of the 3-day Silver Dollar Nationals. Tonight’s winner will walk away with $53,000. The payout from 2nd place to last place isn’t too shabby either.

The first 18 positions in tonight’s main event have already been set. Steve Francis and Don O’Neal will lead the field. They collected the most points have yesterday’s duel heat race format.

The A-Main will feature 80 laps around I-80 Speedway in Greenwood, NE. 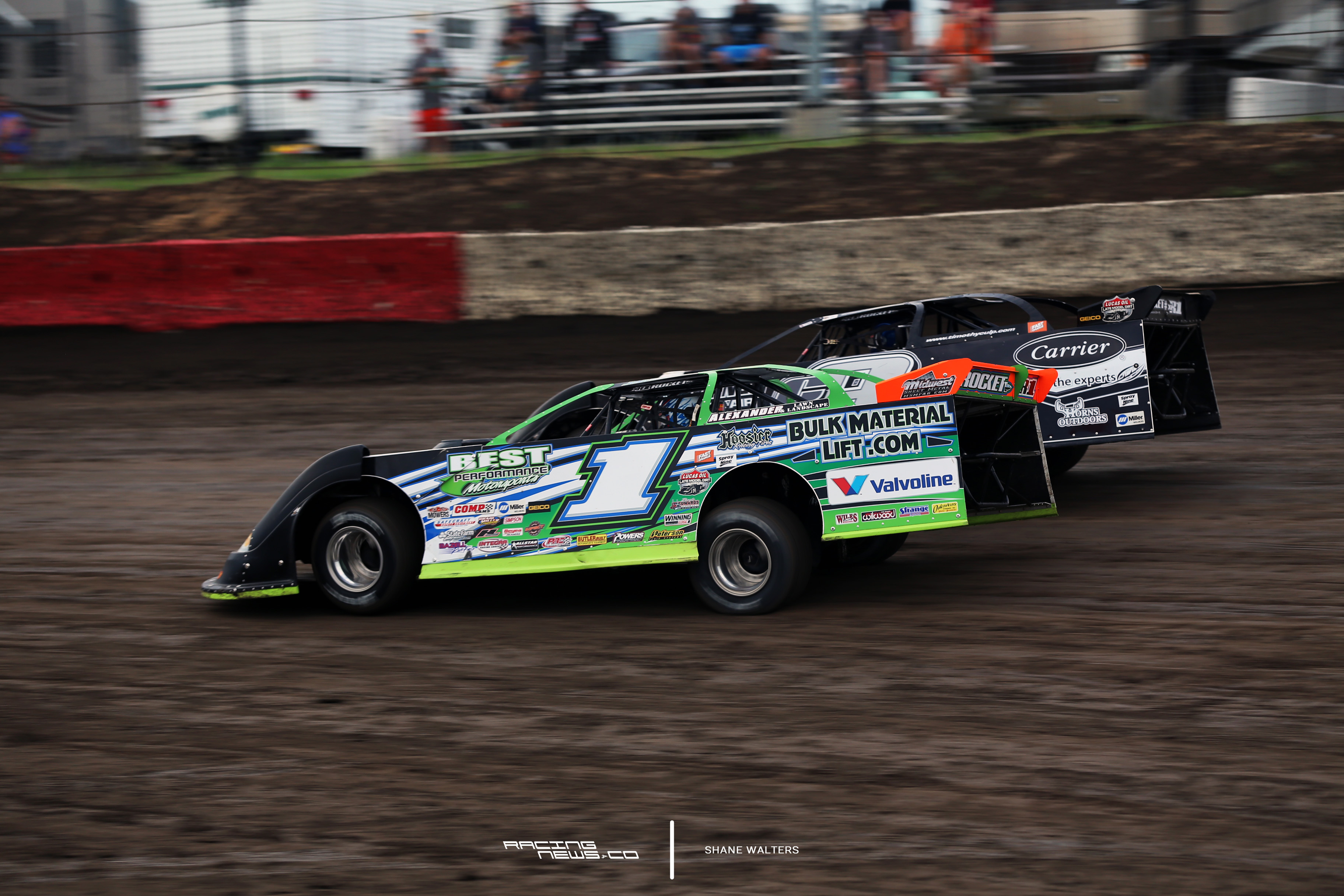 B-Main #1
Josh Richards and Timothy Culp set the first row. They lead the first of two B-Mains to the green flag. Top 3 set the inside final rows of the main.

Josh Richards and Timothy Culp run side by side in turn 1. Culp slips in turn 3, give the lead to Josh Richards on the bottom lane. Caution.

Green. Richards is driving off.

Culp is going the opposite direction. He finds himself in a battle with Satterlee for the 3rd and final transfer spot.

Richards drives to the win. Satterlee misses the cut but he’ll be gifted a provisional in the main. 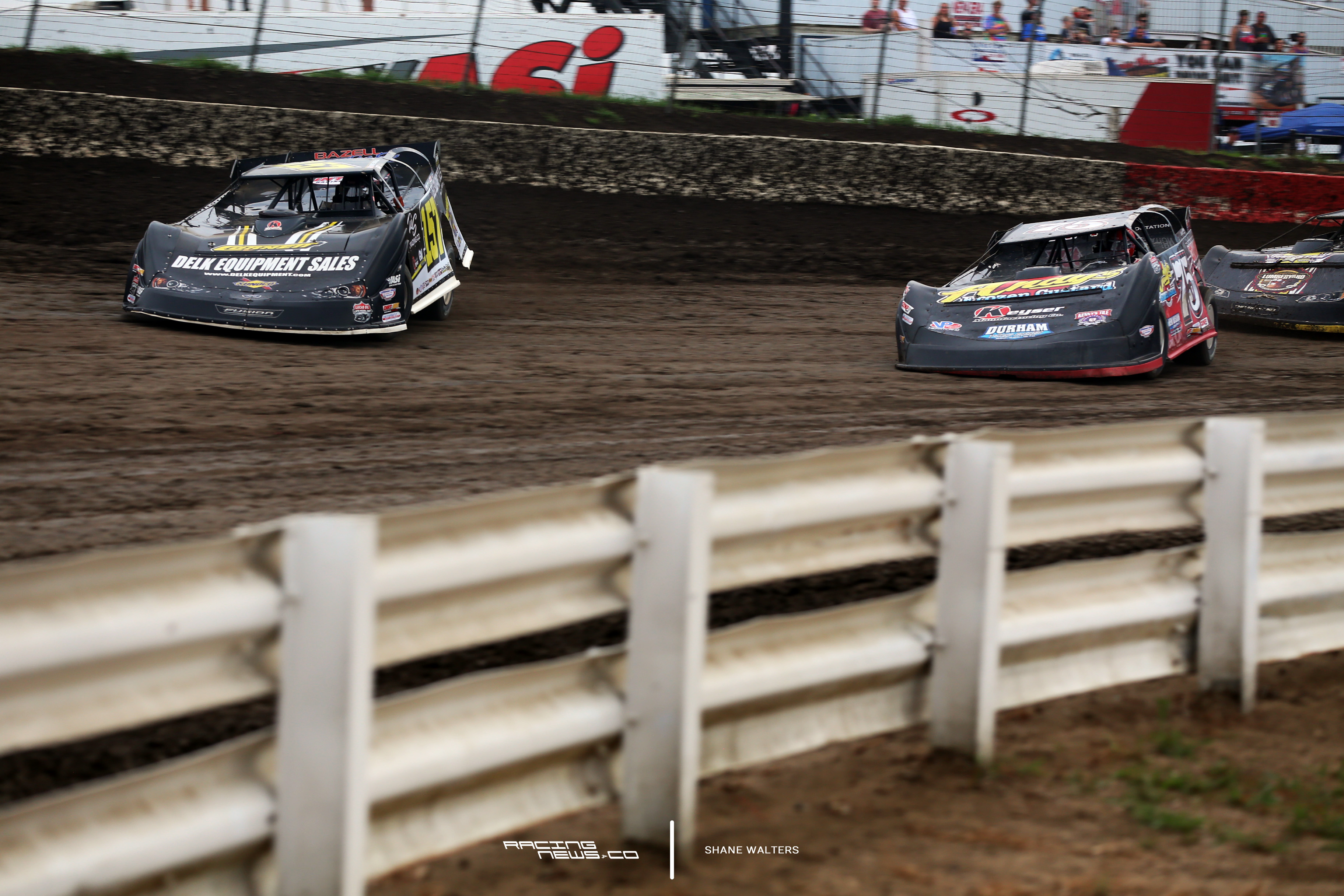 B-Main #2
Terry Phillips and Mike Marlar line up first in B-Main #2. The top 3 finishers set the tail of the outside line in the main.

Mike Marlar jumps out to the lead. He hits the cushion with no plans of leaving it.

Terry Phillips slots into the runner up spot. But Chris Simpson wants a better starting position. He takes 2nd away and puts Phillips on the hot seat.

Marlar has left the field. He wins B-Main #2.

Owens is another LOLMDS regular in need of a provisional. It’s going to be a large field of cars tonight. 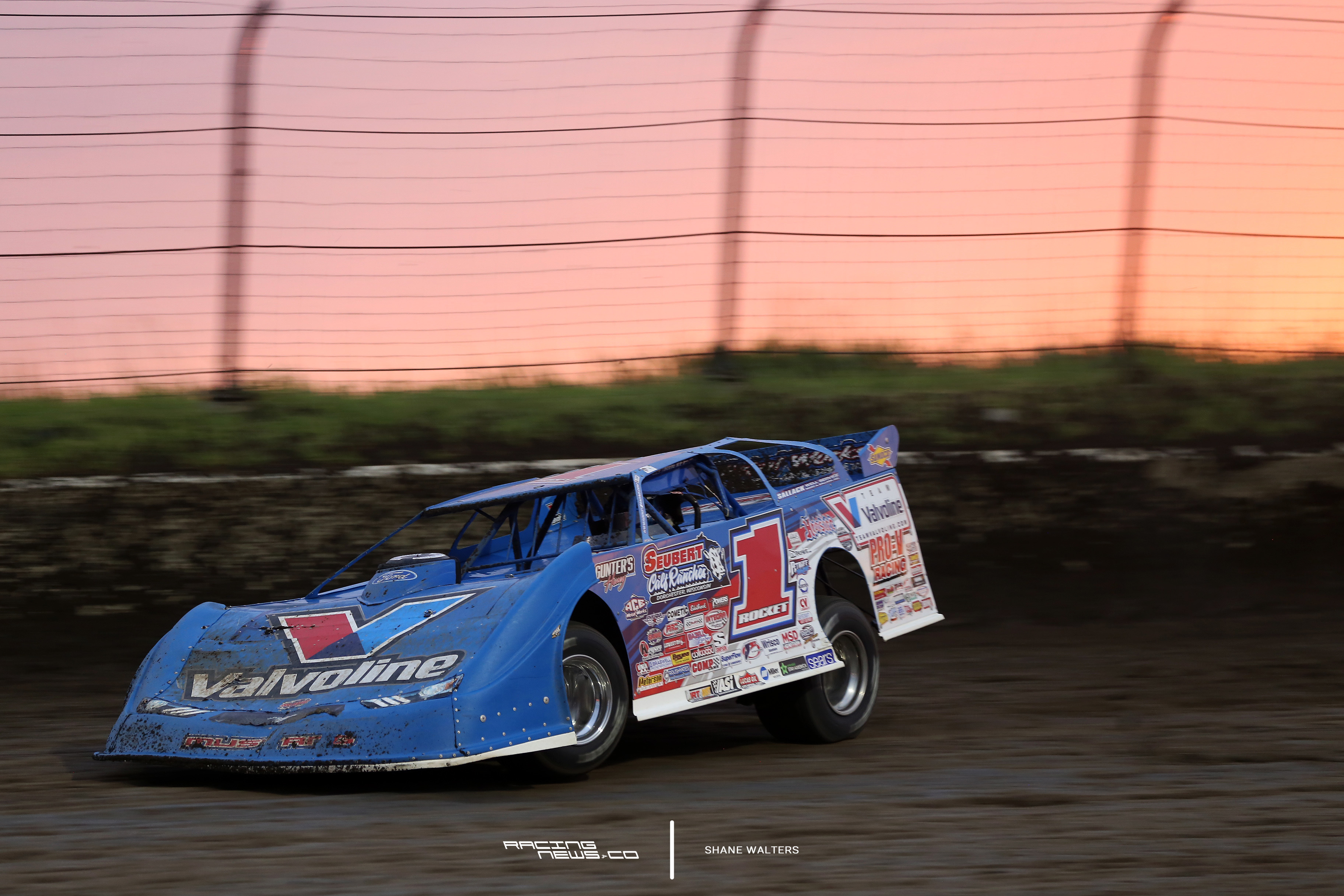 Caution. John Duty is riding the wall in turn 3.

He’s vertical on the wall. As his car slows down. He gently rolls down the banking. End over end, backwards. It comes to a rest, right-side up.

Duty doesn’t climb from the #5 car but the dirt late model driver is alright as he leaves the racing surface on the hook. Red Flag. 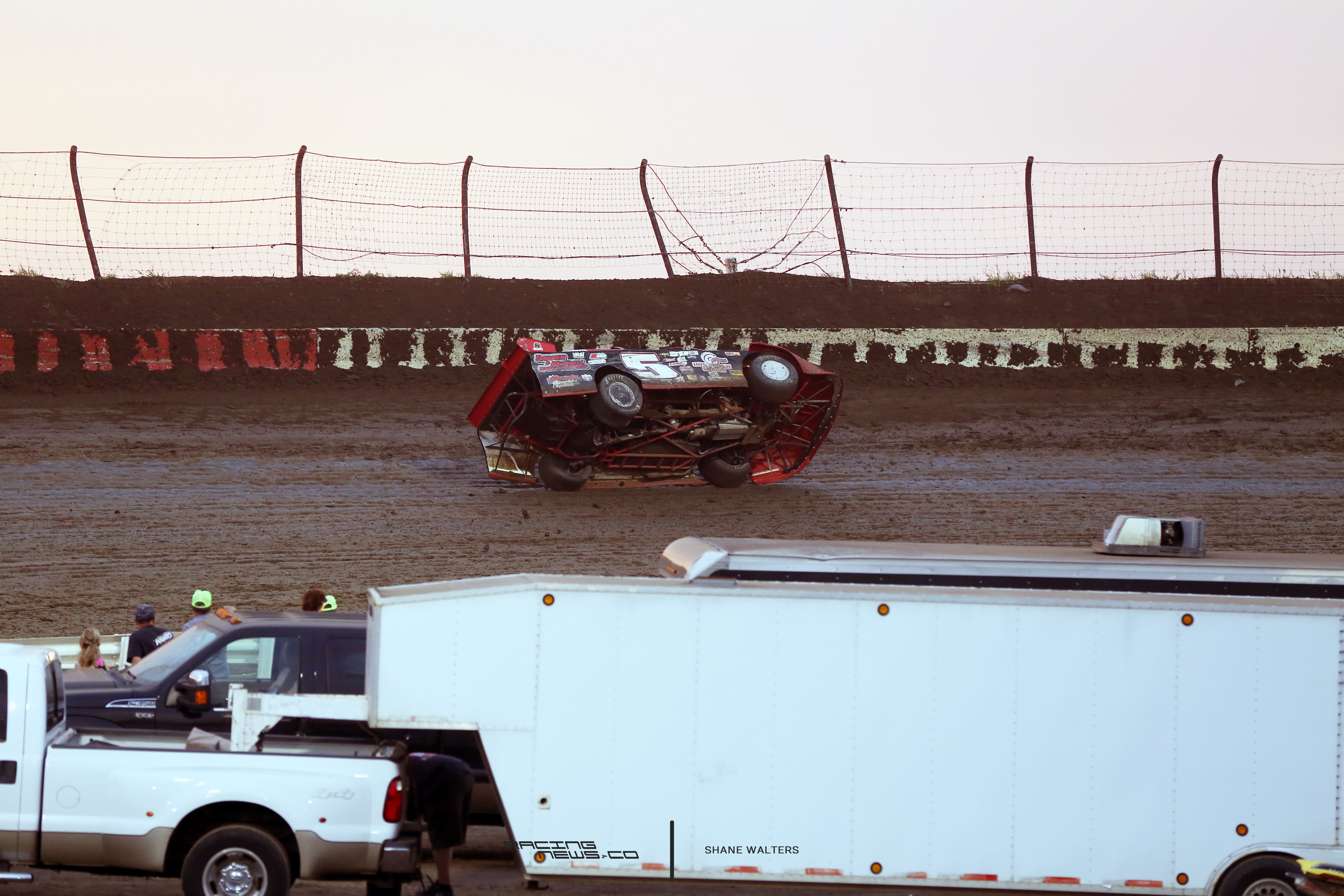 Green. Caution. Green. Mars does it again. This time a lap it completed

Nobody in this race can touch Brandon Sheppard. He drives off to the win in the Belt Bash, non-qualifiers race.

Raindrops fall lightly overhead as the field lines up on the front stretch. It doesn’t matter, it’s a drizzle, after 3 days of getting to this point we’re going green. 4 wide salute, fireworks. 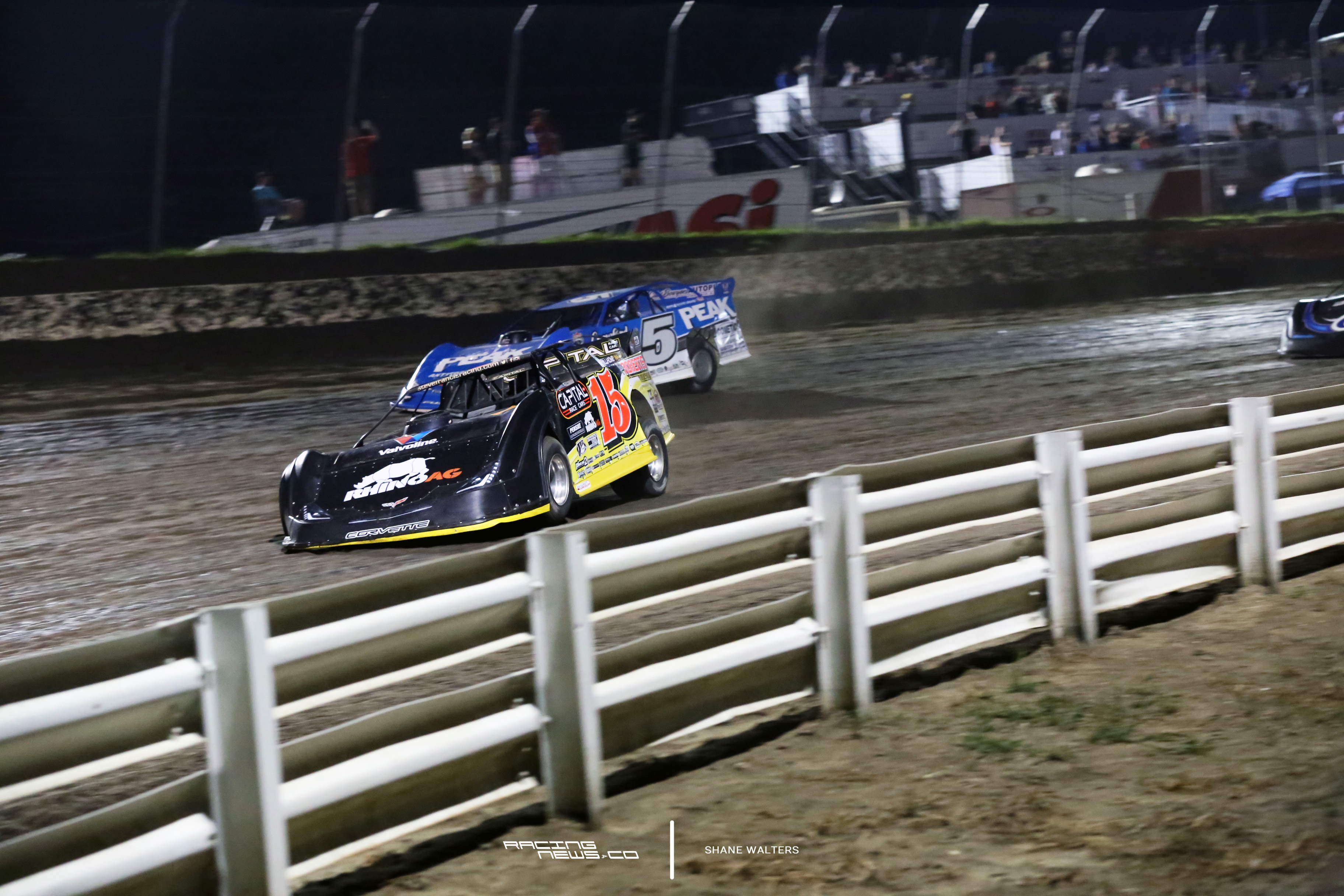 Brian Shirley is coming on the bottom he picks off O’Neal as well. Caution. Lap 3.

Tim McCreadie is flying through the field. He started 16th. He’s now inside the top 5.

Caution. Billy Moyer is backwards in turn 2. He’s pointing at Erb as he rests.

Trouble! Shirley had a nose on Don O’Neal at the exit of turn 2. O’Neal was going to clear the car to the wall. Shirley’s nose was there. 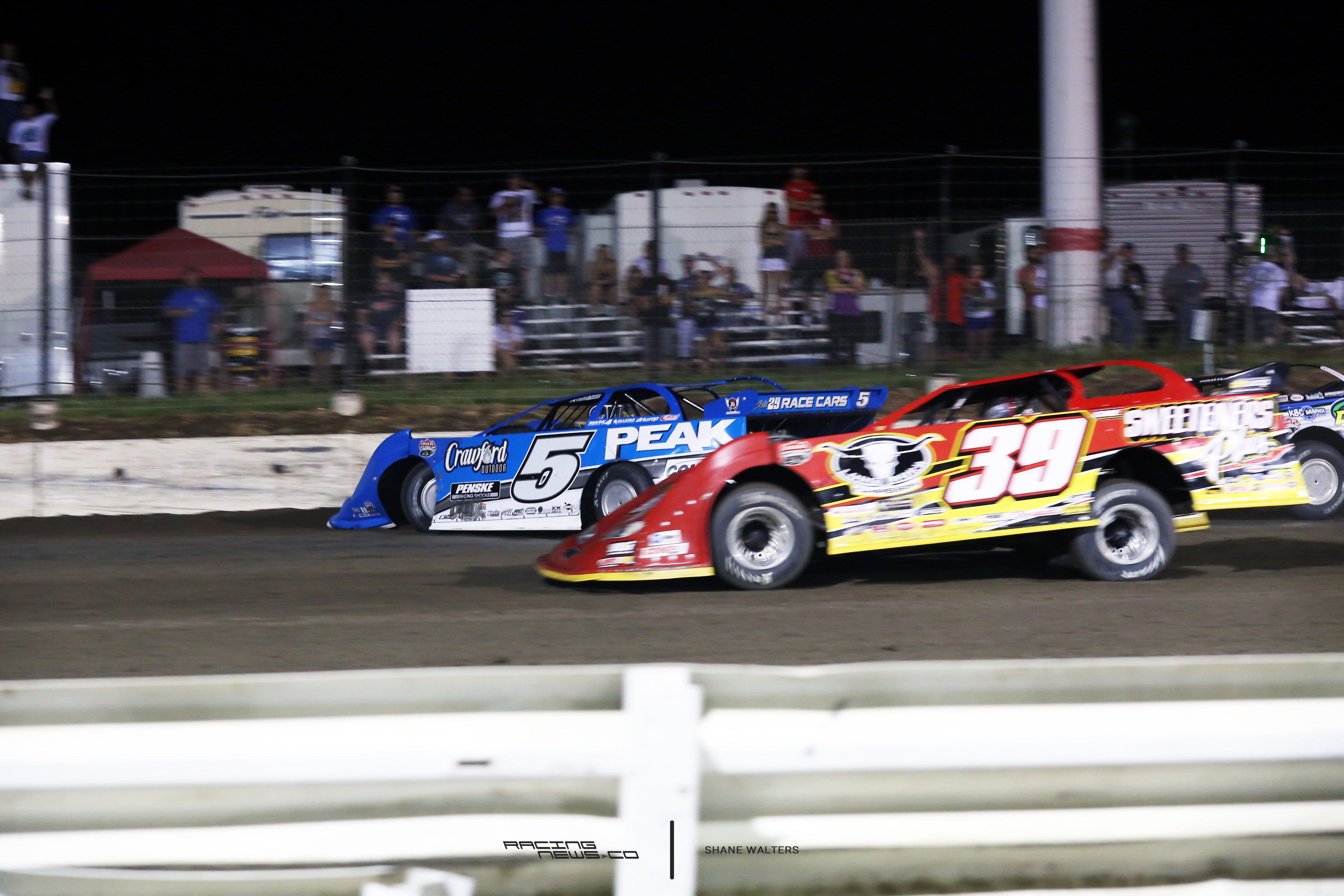 Don O’Neal gets turned completely sideways. He’s into the wall nose first. Tim McCreadie avoids it all and drives under power to the lead. Don O’Neal somehow gets it straight again. He holds onto 2nd. No caution. Still trying to figure out how that didn’t turn into a red flag. 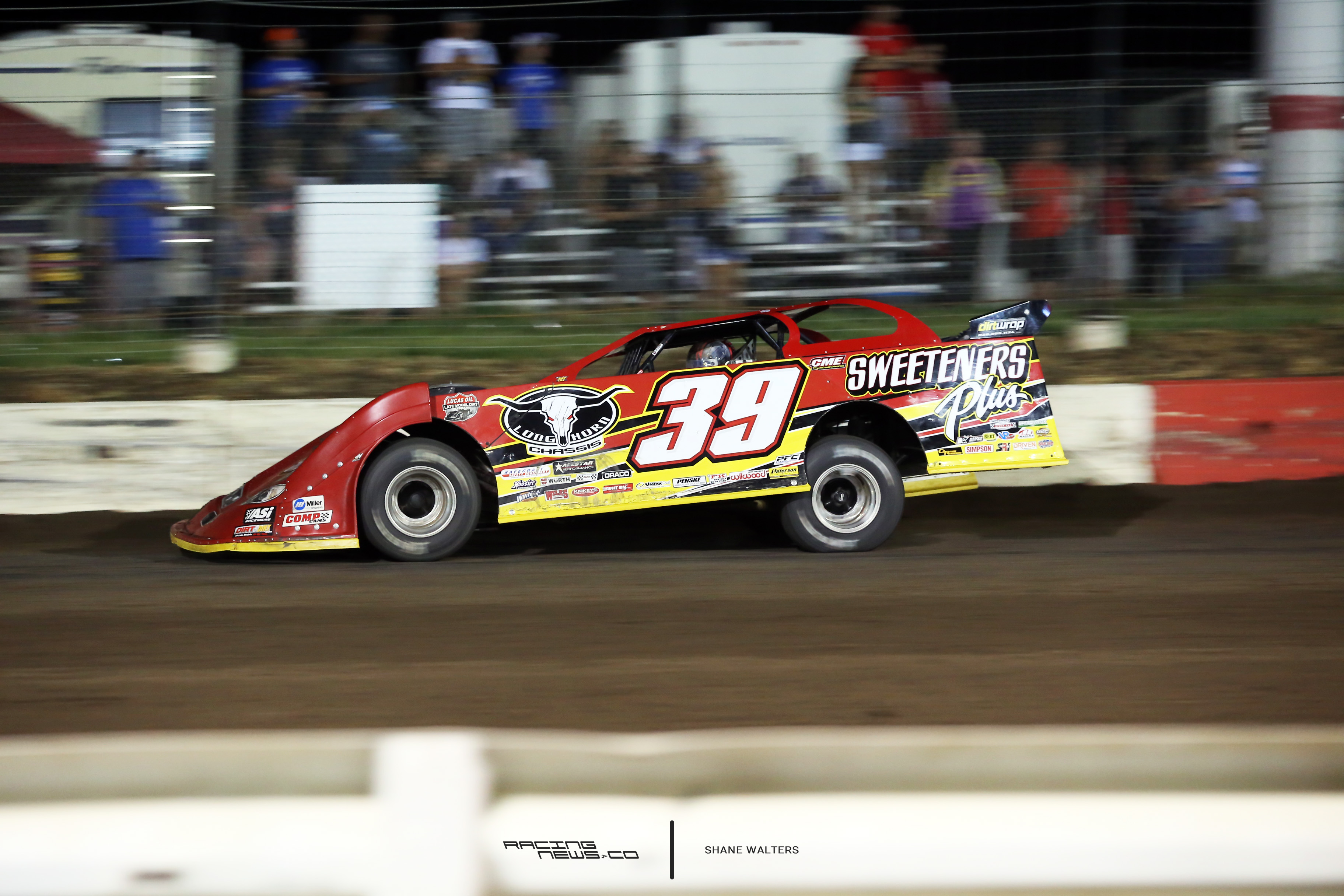 Green. Tim McCreadie is driving away from the field. The race is for 2nd. Earl Pearson Jr is coming. He’s under Brian Shirley. They head into turn 3, Shirley takes it back. Bronson slips by Pearson as well.

Caution. Jimmy Owens is in the wall in turn 2.

Lap 38. Green. Bronson jumps the cushion in turn 1. Brian Shirley slips by. Bronson is 4 wide off turn 2 but he holds onto 3rd.

Lap 50, McCreadie is fighting for the bottom with the lapped cars. He was under Tad Pospisil in turn 1. Pospisil wasn’t aware of that. McCreadie sent him for a 90 degree slide on entry. Both checkup but continue.

Lap 52, green. Someone got squirmy on the restart. That bunched up the whole field. Chase Junghans went upside down. Multiple cars involved in the crash before the flag stand. Red flag.

Earl Pearson Jr is back around Brian Shirley.

Caution. Josh Richards is in the pits for a helmet change and RR tire change.

Green, lap 57. Tim McCreadie leads. Brandon Sheppard had now driven from the back to the front. He hasn’t left the cushion all night.

Now, he’s all over Earl Pearson Jr for 2nd. Sheppard started this race on a provisional. Move Sheppard to 2nd.

Caution. This just got really interesting. 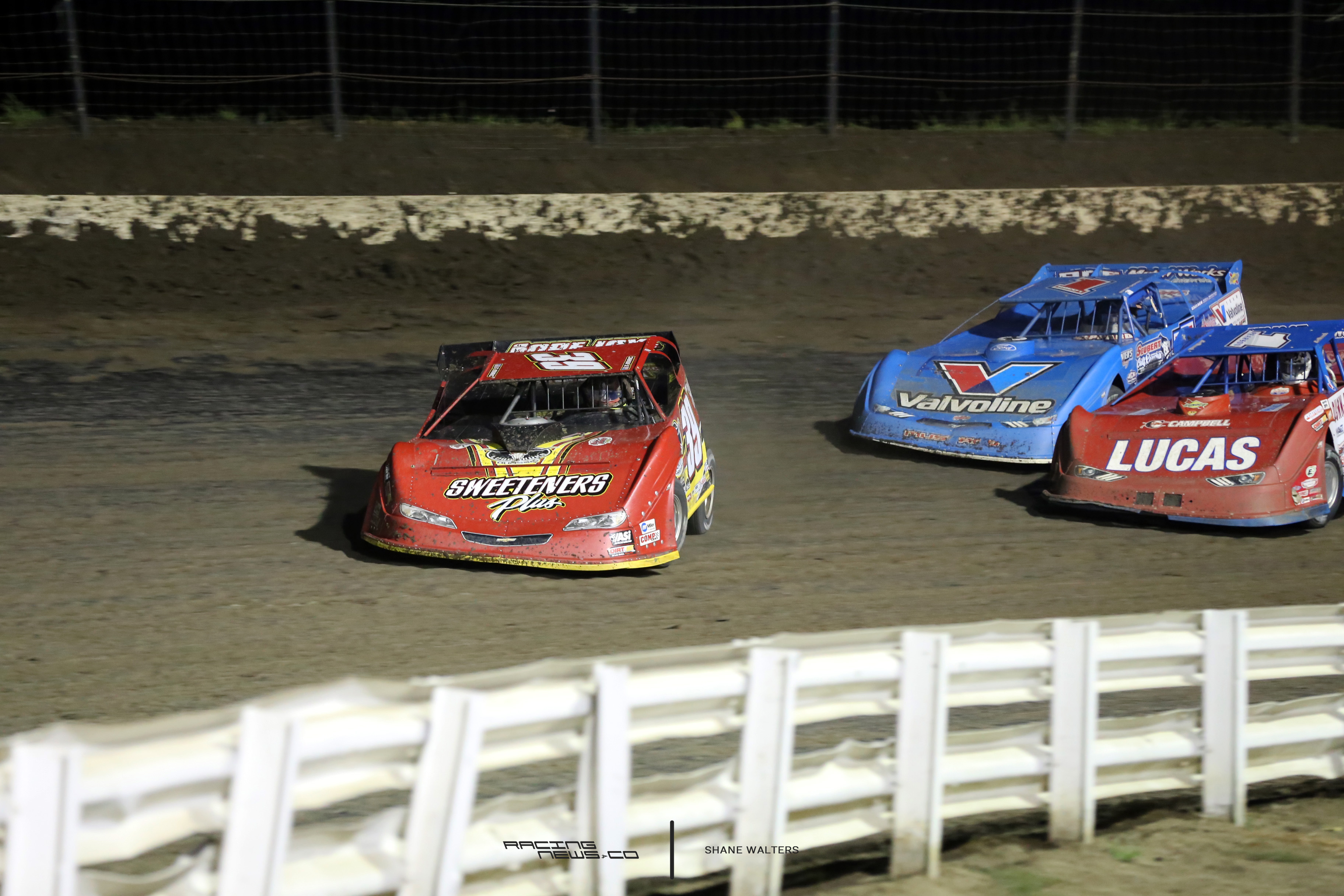 Lap 69, green flag. Tim McCreadie leads as Sheppard and Pearson fight for 2nd. Sheppard is through and mounting a fight for the lead. Hudson O’Neal pulls a slider on Pearson.

McCreadie and Sheppard now mirror each other’s lines. McCreadie pulled up to block and he’s driving away again.

View full Silver Dollar Nationals results from I-80 Speedway below.

Tim McCreadie from victory lane, “Thanks to all the fans for coming out tonight. When I heard them say Sheppard was second on that final restart. I thought, WOW, because he started in the back. On that last restart, my crew motioned for me to go out further on the track from where I was running. They showed me where Brandon was running. Holy cow, $53,000, that’s a lot of money. After Don [O’Neal] and Shirley got together I just got by them. My car was good on the bottom anyway so I just stayed there.”

The 2017 Silver Dollar Nationals winner, “Sometimes you have to have a little luck. I have only run this Pro Power motor twice before. Hats off to Bill Schlieper and everyone at Pro Power. I want to thank Longhorn Chassis, Bobby, Terry and Justin Labonte for giving me this opportunity to drive their car. This whole deal is amazing. We have had our growing pains, but everyone has stuck behind me.”