What kind of racing will it create? Tandem racing? Today, we find out.

Lap 6, Daniel Hemric is on the pit lane. He got too low in the corners, kicked up grass onto the front splitter. No damage.

Denny Hamlin, Ricky Stenhouse Jr and Kyle Larson are on the infield golf course. A round of golf as they watch the race from a TV in the golf cart.

Lap 13, Elliott Sadler, William Byron and Erik Jones line up nose to tail at the front. It looks a bit like an Indycar race. The snake line is in full effect down the straights. 2 laps until the competition caution.

Erik Jones works around William Byron for 2nd. But he runs out of time to get to the leader before the yellow flag. Competition caution is out. Erik Jones has spun on pit road! As he turned left into his box he received a light tap in the rear. That sent him around.

Green, Daniel Hemric leads the field to green. Hemric gets a horrible restart. Something had to have gone wrong there, that was more than spinning tires. Kyle Busch to the lead.

8 to go in stage 1. The new package is in full effect! William Byron pulls off the rear bumper of Kyle Busch in turn 1. He gets a run off turn 2. The draft swings him around Kyle Busch down the back straight-away. New leader, William Byron.

3 to go in stage 1. Two car break away at the front. Kyle Busch is glued to the rear bumper of William Byron. Two car tandem break away by 1.5 seconds over 3rd position. 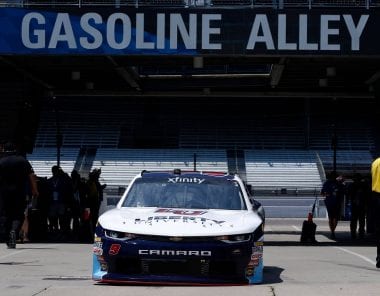 Green flag on stage 2. Kyle Busch and Joey Logano lead the field at the flagstand. Cole Custer gives a big push to Joey Logano on the outside lane. That push catapults Logano to the lead. 1/2 of lap 1 complete.

The race for the lead isn’t over. Kyle Busch has a huge run out of turn 2. He pulls low. Logano blocks, Kyle swings high. The run is significant, it can’t be blocked. Kyle Busch to the outside and back to the lead by turn 3.

Lap 39, trouble. Ryan Seig is sideways on track. Caution. Ryan Sieg had his left front nose to the outside of Spenceer Gallagher on corner entry. Gallagher drifted up to make the widest corner entry. That stacked up the field and sent multiple cars around.

Tyler Reddick went through the grass to avoid it. He launched, airborne. Major damage from the grass. Reddick radio, “I’m sorry. I don’t know what I was thinking.

Green, Logano has a fender on Busch in turn 1 but it doesn’t last long. Busch clears him at the exit of turn 2.

12 to go in stage 2. Caution. Mario Gosselin tried to slip in behind Garrett Smithley at corner entry. A slight miss-judge led to the #0 getting clipped and turned. He avoided the wall and spun to the inside of the track. Garrett Smithley radio, “Friggin 90!”

Green. Both Kyle Busch and Joey Logano get a huge push. Kyle Busch wiggles, he helper backs out. Allgaier remains locked to Joey Logano. Move both of them to the front on the outside. Justin Allgaier isn’t done. He has a run, looks to the outside. All alone, Allgaier to the lead.

6 to go, Kyle Busch wants the lead back. Busch looks low on Allgaier, he’s there. They touch on exit. The side drafts slow both cars down, that pulls William Byron into the race for the lead. Busch stalls out, Byron makes it 3 wide for the lead. Byron takes 2nd, Allgaier continues to lead. The next lap, Busch to the outside, he’s back around Byron!

4 to go, Just Allgaier has his hand out the window. The leader is coming it pit road as are Logano, Byron and more. The #7 team just made a ton of mistakes. He exited his pit box without the right front attached. He rolled over the air hose, pulled that hose apart. Big damage, he’s stopped on track with 3 wheels. Allgaier was leading moments ago, now he’s climbing from the car. Caution.  This stage will finish under caution. 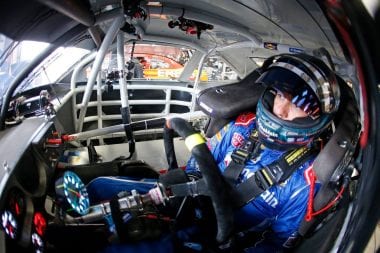 Green flag on the final stage. Kyle Busch and Erik Jones side by side for the lead. Kyle Busch prevails. 3 wide through the middle of turn 3 for 2nd. Kyle Busch breaks away from the pack.

Lap later, William Byron is experimenting. But it goes wrong, a bad aero situation and William Byron gets swarmed. He loses a ton of positions. Erik Jones to 2nd. Logano to 3rd.

Elliott Sadler, William Byron and Joey Logano have decided to line up. Daytona style, the are single file trying to chase down the leader.

14 to go, Kyle Busch runs 21st. He pitted for tire wear. It wasn’t a fuel issue. The team had tire wear in practice and the team was concerned about the longer run. Meanwhile, leader, William Byron is complaining about a vibration.

10 to go, two car break away up front. William Byron and Joey Logano have broken away from Elliott Sadler. 1 second back, Paul Menard just passed Sadler for 3rd.

5 to go, Paul Menard has chased down Joey Logano from a full second back. He’s looking inside Logoano, he’s there. Clear. Menard to 2nd.

Byron is 100 feet up the road. This is getting good, quick.

3 to go, 50 feet, 30 feet. Menard is there. Byron activates the snake effect on the back straight away. He’s trying to break the draft.

2 to go, this time he’s not trying to break the draft. It’s a full on block down the back straight.

Next week, the NASCAR Xfinity Series switched from a big restrictor plate track to a tiny one. The series heads to Iowa Speedway.