CHARLOTTE, N.C. (July 25, 2017) – When you make a list of the most successful NASCAR drivers in the last three decades, it doesn’t take long for Mark Martin’s name to rise to the top.

The Batesville, Arkansas-native won 40 Monster Energy NASCAR Cup Series races, finished second in the championship standings five times and notched five titles in the IROC Series during the course of his 31-year career. The 2017 NASCAR Hall of Fame inductee was also incredibly proficient in the NASCAR XFINITY Series, winning 49 races and 30 poles.

Clint Bowyer and his #14 Stewart-Haas Racing (SHR) team will tap into that proficiency in the Sept. 3 Southern 500 NASCAR Cup Series event at Darlington (S.C.) Raceway when they honor Martin with a throwback paint scheme from when he drove a Carolina Ford Dealers Ford Thunderbird for Bill Davis Racing in 43 XFINITY Series races between 1988 and 1991. 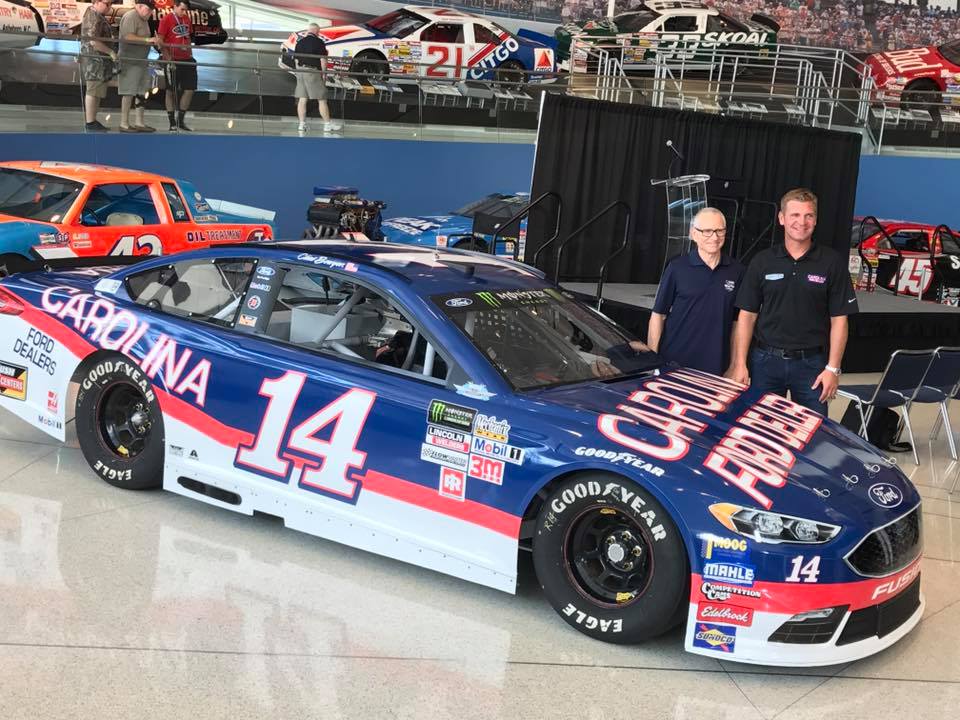 Martin earned three XFINITY Series victories and scored 11 top-five finishes in the predominantly blue, white and red Carolina Ford Dealers Thunderbird. His best Darlington result in this car was second in the 1989 Country Squire 200 where he finished .37 of a second behind race-winner Geoff Bodine. But that runner-up effort was a prelude of what was to come, as Martin eventually earned eight XFINITY Series wins at Darlington to augment his two Southern 500 victories in 1993 and 2009.

“If you want to associate yourself with a winner and all that’s good about our sport and its history, then you aren’t going to do any better than Mark Martin,” said Bowyer, who raced as a teammate with Martin in 2012 and 2013 while at Michael Waltrip Racing.

“I’m proud to say I got to race with and against Mark in my career, and it’s an honor to have him join us at Darlington in September,” Bowyer said. “When the folks at SHR and Carolina Ford Dealers came up with this idea, I was pretty pumped up for it. Then I saw the paint scheme and I knew it was going to be one of the best in Darlington.”

“Carolina Ford Dealers won in the state of South Carolina almost 30 years ago, so I think they’re probably due for another win in South Carolina this September with Clint,” laughed the 58-year-old Martin, whose last Cup race came at Homestead-Miami Speedway on Nov. 17, 2013 in SHR’s No. 14 as he subbed for an injured Tony Stewart.

He continued, “Seriously, this is a really cool deal and brings back a lot of memories. This was a good time and I hope the race fans enjoy it as much as I will seeing it out on the track. Darlington is one of my favorite places on earth and I’m not going to miss this one.”

The 1.366-mile Darlington track and its Labor Day race weekend host “The Official Throwback Weekend of NASCAR” when the industry honors the sport’s history. Last year, 36 Cup Series teams competed with throwback paint schemes in the Southern 500, the most in any single NASCAR event in the sport’s history.

Bowyer, an eight-time NASCAR Cup Series winner, is in his first year driving SHR’s No. 14 Ford Fusion after replacing three-time champion Stewart, who retired as a NASCAR driver at the end of the 2016 season. Bowyer is battling for a berth in NASCAR’s playoffs, which begins two weeks after the Southern 500.

Bowyer said he might put Martin to work at Darlington.

“Mark has as much experience as anyone there. I won’t hesitate to lean on that wisdom. As this playoff battle heats up, I’ll be glad to take any advice from Mark,” he said. “I’ve leaned on him before and I’ll do it again.”