Or a better one?

The former body shop repairman grew up amid the wheat fields of Emporia, Kansas with the closest major road course at Heartland Park in Topeka, about 60 miles from Emporia. As he honed is driving skills, Bowyer was more focused on motorcycles and dirt ovals than twisty road courses. 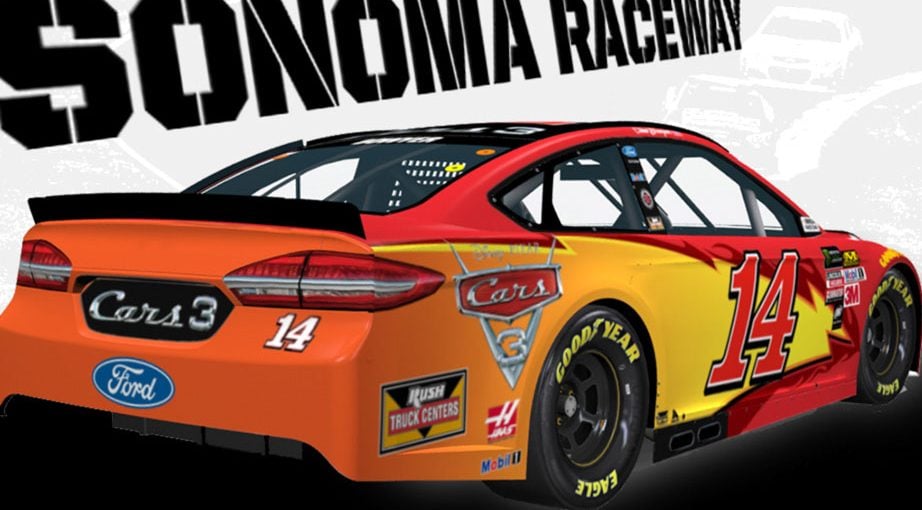 The NASCAR Cup Series travels to the California road course set in the scenic Wine Country this weekend, and it’s Bowyer who tops the list of the most points scored on the 10-turn, 1.99-mile track in the last 10 years. Those impressive numbers include a 40th-place finish last year after a lap-five electrical fire.

“Not in a million years would I have imagined this success,” Bowyer said. “After the first couple stabs at it, I was relatively good out there. I struggled a lot at Watkins Glen but always was able to find pretty good speed and get settled in and get comfortable at Sonoma. It has been good to me, it’s a fun racetrack. It’s a short track of road-course racing and it just kind of fits my driving style.”

Related: Behind the Scenes of Cars 3 with Chase Elliott

Bowyer’s best moment at Sonoma came in June 2012, when he held off now Stewart-Haas Racing (SHR) teammate Kurt Busch and Tony Stewart, who co-owns Bowyer’s No. 14 Ford. Bowyer dominated the race by leading 70 of the 112 laps.

Defending race-winner Busch was all over the bumper of Bowyer’s car late and got a final shot in a two-lap overtime sprint to the finish. Bowyer raced side-by-side with Busch at the green flag, then cleared Busch and pulled away for the win. Bowyer had to walk to victory lane to celebrate with his crew after his car ran out of gas during the cool-down lap. Stewart passed Busch on the final lap to claim second. 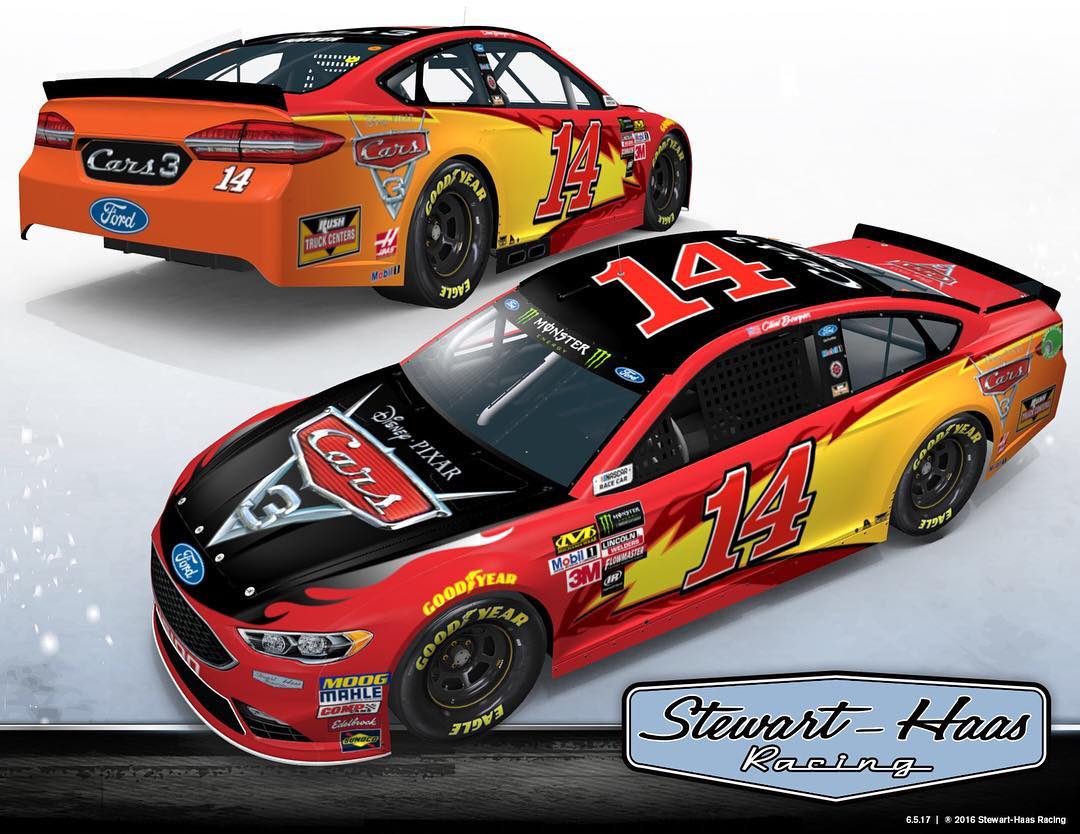 He visits Sonoma for the first time driving an SHR Ford powered by Roush-Yates Engines under the guidance of crew chief Mike Bugarewicz, whose race call in this event last year, combined with Stewart’s driving, gave the three-time champion his final NASCAR victory.

Bowyer hopes he can also drive the No. 14 to victory lane at Sonoma.

“They’ve brought me hot rods all years so I expect to have one this weekend, as well,” Bowyer said. “It takes a heck of a lot to win a race these days, but I know we’ll have just as good of a shot as anyone else if all goes like we expect. They did it last year with Tony and I’d love to go to victory lane this weekend.”

For Bowyer, the trip to Northern California means an all-around good weekend.

“It’s a fun weekend for everyone in the garage area,” he said. “It’s almost like vacation, it really is for everybody — the wives, the girlfriends – they all go on wine tours, we get done with practice and have our hands full with a complete mess on our hands. Nonetheless, everybody is having a lot of fun.”

Bowyer’s No. 14 Ford will carry a special Cars 3 paint scheme this weekend to promote the popular movie that opened this month. In the movie, blindsided by a new generation of blazing-fast racers, the legendary Lightning McQueen teams up with tech-savvy trainer Cruz Ramirez to get back into pole position.

Hopefully Bowyer’s movie will end as well in Sonoma.

CLINT BOWYER, Driver of the No. 14 Ford Fusion featuring Cars 3 for Stewart-Haas Racing:

What helped you improve your road-course racing?

“I think a big part of it is engineering. They came into this sport — our engineers were able to get our cars underneath us way better than we could before. Those ringers would go test time and time again all over the place, all sorts of different racetracks, in preparation for these one or two races.”

He continued, “And, when we’d get there, our focus is on those mile-and-a-half tracks that make up the biggest part of the season. That’s a big difference. When we get here and we’re on the same playing field as they are, I feel like I’m proud to say the Cup regulars are holding their own.” 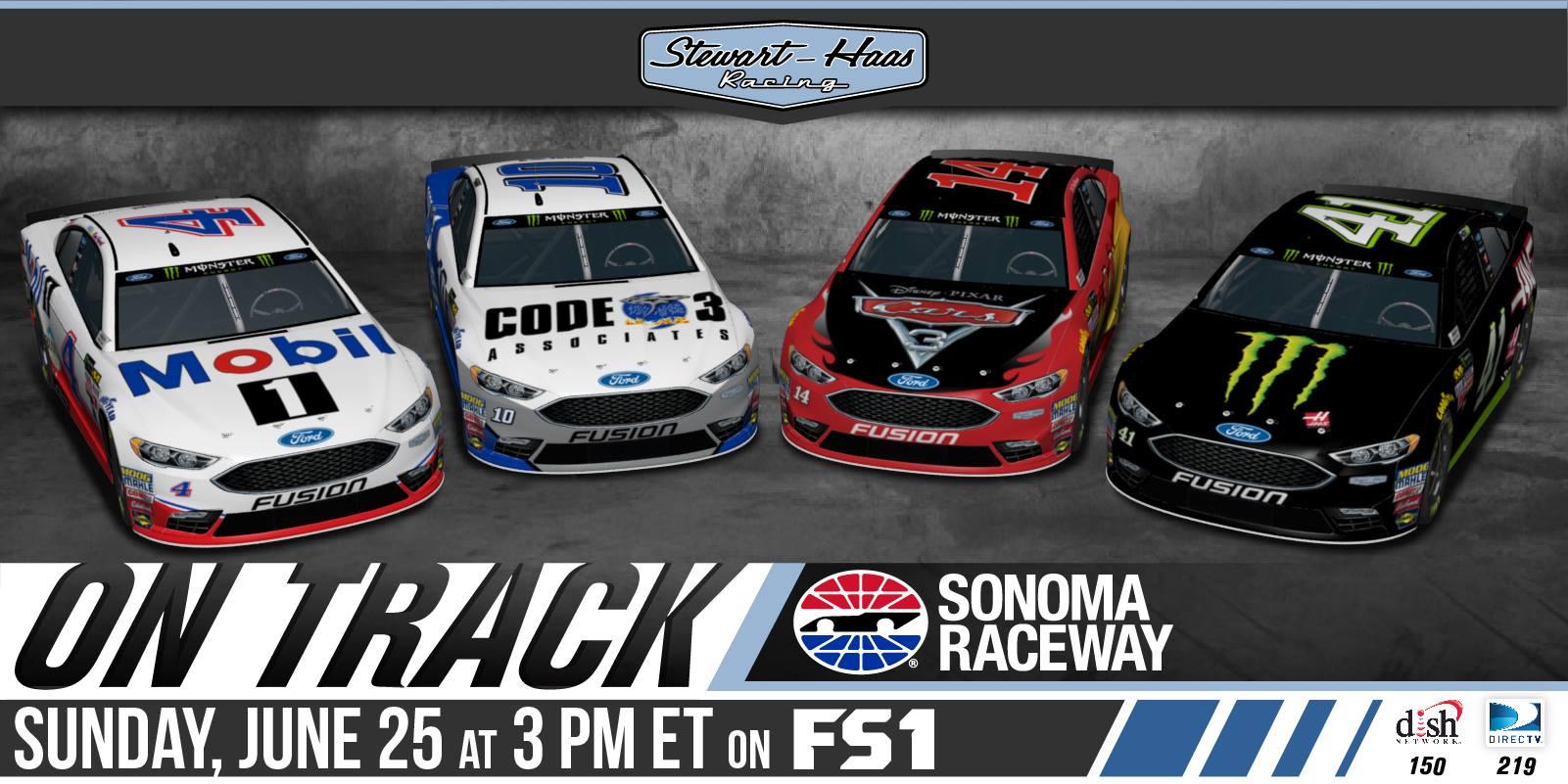