After multiple laps of working the bottom, Kenny Wallace had a nose in front. Lapped traffic was ahead on the bottom, his window to make the pass was closing. As they caught lappers, Wallace was going to get boxed in on the bottom and fall to 5th.

Kenny took the gamble, he drove it in deeper than usual in turn 3. A slide job attempt, nearly clear but not quite. Instead of catching the cushion, Kenny drifted up the banking and caught the left front of Paul Bailey. They then ran out of room completely on the exit of turn 4. Bailey ended up scrapping the wall. He lifted off the throttle and dropped from 1st to 5th. Kenny Wallace took the lead. 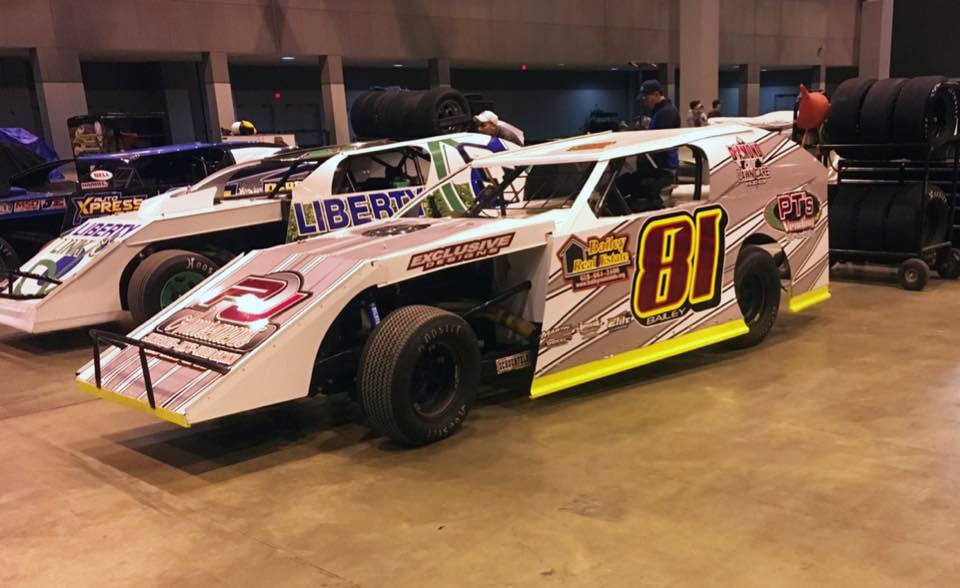 Bailey described the on-track incident, “I was running the high line. It was a little rough up there. So, I was just trying to keep Wallace at bay. I could see him and I knew where he was. We started catching lapped traffic, he just decided to run me over instead of getting stuck behind lapped traffic.”

Laps later, a caution came out. Paul Bailey drove up to the right rear of Kenny Wallace and made a bit of contact under yellow. It was light contact, at slow speeds down the back-straight away. Though it was enough to tear the rivets on the right rear quarter panel of the #36 modified. Just enough contact to let Wallace know he wasn’t happy.

Paul Bailey put it in his own words, “The first caution came out. I told him what I thought.”

After the race, Kenny Wallace went to victory lane. He won the UMP Modified race. Paul Bailey finished 5th and went to the scales.

Kenny Wallace comments from victory lane, “Well, you know, I had to get by that #81. So, I slid him. That pissed him off. So, the #81 was pissed I slid him and he did this under caution [pointing at the damaged right rear]. It’s fine. It’s all good. It’s bullring racin’. Hey, there’s a reason it’s nicknamed Belle-Vegas.”

As Kenny Wallace exited the track in turn 1, a crew member of Bailey was there waiting for him. They talked it out briefly then Kenny drove to the scales. The #36 exited the scales and circled back. While passing the pits of Paul Bailey, the conversation resumed.

This time, Paul Bailey was there to talk it out as well, driver-to-driver. Respectfully, Kenny Wallace shut off the engine to allow Bailey to voice his frustration. Kenny Wallace was apologetic repeatedly stating, “I’m sorry.” Short track contact is going to happen for time to time, so far, this is mostly expected at Belle-Vegas.

The two drivers had nearly finished talking. Kenny Wallace, still in his car, started the engine and was getting ready to finish the drive back to his own pit stall. He shut it down again to continue the talk. That’s when all hell broke loose in the pits at Belle-Clair Speedway.

Paul Bailey described, “They just proceeded to think they were on the wrong end of the deal. When he come in, I was having words with Kenny. You know, driver to driver. It got a little heated, but we were calmed down. He was about ready to leave.”

At that exact moment, a crew member of Kenny Wallace Racing came running around the corner. He didn’t see the whole scene, he had just arrived. He had a matter of a few seconds to read the situation. Unaware the discussion was just about over with, all he saw was a rival driver pointing at his driver and sticking his head in the drivers side window.

The Kenny Wallace crew member went into bulldoze mode. He b-lined, sprinted directly at Bailey. A tackle, into a chokehold. He then lifted the driver fully off the ground, level with the height of his own head and slammed him to the ground. He choke slammed him.

Kenny Wallace started the car and drove away from the chaos. Instinctively, Bailey chased down the man who just assaulted him, for almost no reason. But, cooler heads prevailed. Instead, he stopped the chase and called the police.

A police report was filed.

No major injuries were suffered from the altercation. An hour later, Bailey had a couple of bumps on his forehead. Other than that, he’s good to go for the next week of racing.

Kenny Wallace does so much for the sport of dirt track racing. In this case, it was hard short track racing followed by a respectful driver-to-driver conversation. The crew member changed the title of this story all on his own.

There’s a lesson to be learned here. The attack was simply unnecessary. The drivers were respectfully handling it themselves. Crew members should understand that sometimes drivers just need to hear an apology from the driver at fault. In most cases, that’s all their looking for.

There was no need for any kind of physical altercation from any side. The crew member overreacted on the limited information that was presented to him. If he walked over calmly, he would have had the time to notice there wasn’t a need to tackle, chokehold and slam the driver.

I have to apologize about the quality of this video. It’s only the 2nd time I’ve ever used the video feature. I was in manual focus, that made things difficult as they started moving. You can still see the bulk of what happened. To fill in the blanks, read above.

NEXT POST
2017 Race for Hope 74 has an outstanding payout