Erin Evernham: “I put out like 100 sponsorship proposals, never heard back from anyone.”

Erin Evernham made a transition from quarter midgets to sprint cars to NASCAR. She did it from a start in Wilbraham, Massachusetts.

She soon made history in the sport. To date, Erin is listed as the only female driver to ever win in the World of Outlaws Sprint Car Series.

There’s been only 24 female NASCAR Xfinity Series drivers in history. The then named, Erin Crocker was the 6th to do it.

But how did she get there?

“I grew up in Massachusetts. I never drove there, but I helped guys at the local asphalt tracks,” Erin Evernham tells the World of Outlaws ‘Open Red’ podcast.

Soon her brothers were put into the quarter midget class. She was 6 years old when she got an opportunity of her own at Thompson Speedway.

“I grew up at the race track. I wanted my turn.” 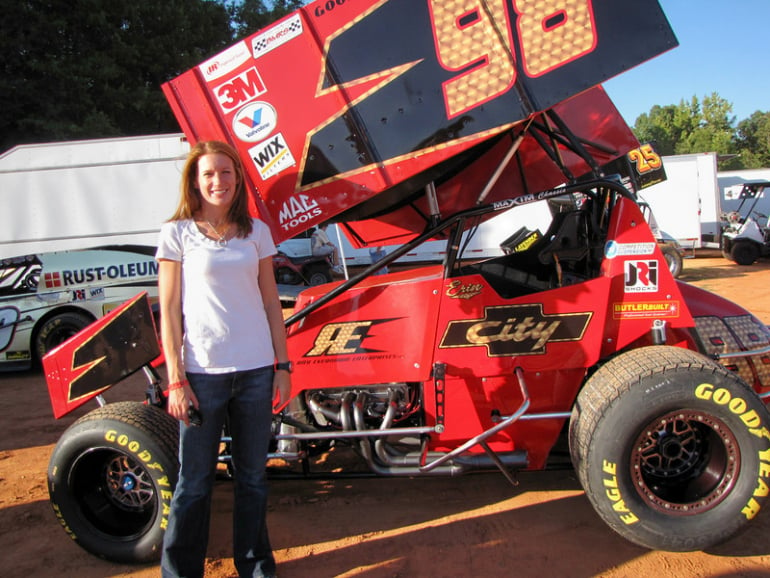 Her Dad put her in a test session at Thompson. He intended to flip on the governor switch but missed it. “He said, ‘Woah, she’s going way too fast.’ ” A racer was born…

From there, she went quarter-midget racing. Several championships later, a new track was born, right in her backyard. Whip City Speedway opened and Erin transferred to running mini-sprints at her new local track, progressing to 1200cc.

That set her on the sprint car racing path. 1999 was the first year Evernham jumped into the seat of a sprint car.

“My dad actually passed away in high school. To that point, he was the one that owned all of our race cars. I was like, ‘What happens now?’ ”

The first time she sat in the seat of a sprint car was at Utica-Rome Speedway. The guy she was driving for had a son that was the primary driver of the 360 sprint car. She was just offered the opportunity to try it out. It turned out to be a life changing experience.

“I was just going to run like hot laps and a heat race. He was still going to run the full night. I just loved it. I obviously never turned out to be Steve Kinser or anything like that.”

“But, it was just one of those things where I just felt comfortable, from the first time I sat in a sprint car. I never felt that way in a stock car.”

Along the way, Erin got an opportunity to drive for Mike Woodring. He told her that if they could find a certain amount sponsorship he’d put her in a second car full-time. Mike was a 7-time Empire Super Sprints champion.

“Mike was super successful in that Empire Super Sprints world. I remember thinking, ‘This is my big break.’ ”

“I put out like 100 sponsorship proposals, never heard back from anyone. One of my professors said, ‘Have you ever thought about reaching out to the school? In a male dominated field, it kinda makes sense.’ ”

The dean of the Rensselaer Polytechnic Institute agreed to meet with Crocker. She went to the meeting, “as professional as I could be as a sophomore in college.”

When she returned to the sorority house there was an email that floated through cyberspace and beat her to arrival. The school had a agreed to sponsor her. “I’ll never forget it. I remember every detail because that was one of the biggest breaks in my career.”

In 2003, she became the first woman to qualify for the famed Knoxville Nationals. In addition, she won the WoO Rookie of the Year award.

In 2004, Erin Crocker became the only female winner in the history of the World of Outlaws Sprint Car Series. She picked up the win at Thunderbowl Raceway in Tulare, CA.

In 2005, she moved to North Carolina and raced stock cars for several years. Erin progressed through the NASCAR ranks while driving for her future husband, Ray Evernham.

Between 2005-2008, Crocker ran 10 NASCAR Xfinity Series events and 29 NASCAR Truck Series races. After a multi-year run, she went back to sprint cars.

“I was like, ‘Whoa, I forgot about that!,” Evernham refers to the steep power to weight ratio of a sprint car. “The first time I got [back] in the car, my head snapped. You don’t feel that in a stock car.”

She returned to sprint car racing and re-visited to victory lane.

Today, Erin Crocker is married to her former car owner, Ray Evernham. The couple married in 2009 and they’ve since started a family. But, they both still share a passion for racing.

“Oh geez, there’s not really a normal day for me anymore. I’m really a full-time Mom. Which is kinda funny, from everything I’ve done in my career.”

“And I tell everyone it’s the hardest thing I’ve done in my career. It makes driving a sprint car look really easy.”

“I’m up at our shop in Morresville. Kinda helping Ray with different things. Ray still goes to some NASCAR races. We still go to some sprint car races. Every day is different.”

Erin now works for MRN. She co-hosts with Steve Post via ‘Winged Nation’ which airs Tuesday’s at noon.

Kasey Kahne abruptly ends his NASCAR career; Off to the dirt tracks!