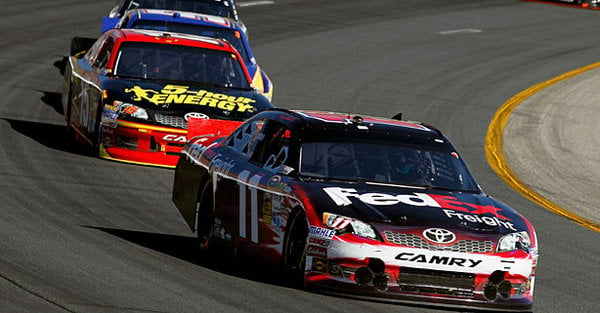 It was Hamlin’s Series-leading fifth victory of the season and first in the Chase as he moved to within seven points of the points lead after the second of 10 races in the battle for the Championship. Joey Logano earned a top-ten finish by coming home in eighth while Kyle Busch lost a certain top-five finish when he lost a cylinder in his engine just past the midpoint of the race and had to settle for 28th.

Hamlin, who was among the fastest cars throughout the weekend during practice, wasn’t able to get a similar result in qualifying and had to start his No. 11 FedEx Freight Toyota 32nd this afternoon. It was clear however from the outset that Hamlin wouldn’t let the poor starting position deter his efforts as he was up to 20th in just 15 laps and moved into the top 15 by lap 30. Hamlin would race in 12th and a great stop by the FedEx team following a lap 40 competition caution would put him inside the top ten for the first time. The No. 11 Camry would continue its climb toward the front and entered the top five by lap 60 and completed his run to top spot when he passed his teammate Busch on lap 94. From there Hamlin dominated the rest of the way while leading a race-high four times for 193 laps. A caution on lap 272 would wash away a more than six second lead he had built up. Once again the team wasn’t bothered by the challenge as Hamlin just drove away from the field on the final restart to claim JGR’s 100th Sprint Cup Series.

Joey Logano started the No. 20 Home Depot Toyota in 18th position and battled mostly tight conditions through the early going after heavy rains washed the track clean of the rubber that had been put down during the weekend. Logano raced for a spot inside the top 15 for much of the first half of the race as the team While under a lap 178 caution for debris The Home Depot crew would decide on a two-tire stop to gain track position which allowed Logano to restart third. While the move helped gain track position, Logano wasn’t able to remain in the top ten as his handling issues continued and he would run in 12th following the final round of green flag pit stop with about 50 laps to go. When a caution came out on lap 272, the 20 team would make the call to remain on the track allowing him to restart eighth in front of a few cars that made the decision to pit for fresh tires. He would go on to hold the spot and finish with a strong eighth-place run.

Kyle Busch started his No. 18 M&Ms Toyota in second at the start of today’s race and was fast throughout the early going as he took the lead on lap 35 and led the next 48 laps. Busch would battle mostly his teammate Hamlin for that top spot for more than half of the race. It appeared Busch was set for a certain top five finish today when he radioed in that his car appeared to be losing power. Busch would drop several positions on the track and the team was able to diagnose that he had lost a cylinder in his engine. He would eventually fall a lap off the pace and was able to finish, but had to settle for a 28th-place.

Jimmie Johnson finished second behind Hamlin, while Jeff Gordon was third, Clint Bowyer fourth and Kasey Kahne rounded out the top five. There were four cautions for a total of 17 laps with 17 lead changes among 10 different drivers.

The NASCAR Sprint Cup Series will remain on the east coast next week with the third race of The Chase from Dover International Speedway next Sunday, September 30. Coverage of the race will be on ESPN beginning at 2 PM ET (pre-race show starts at 1 PM ET).

You can also keep track of all the action every day by following @joegibbsracing on twitter.