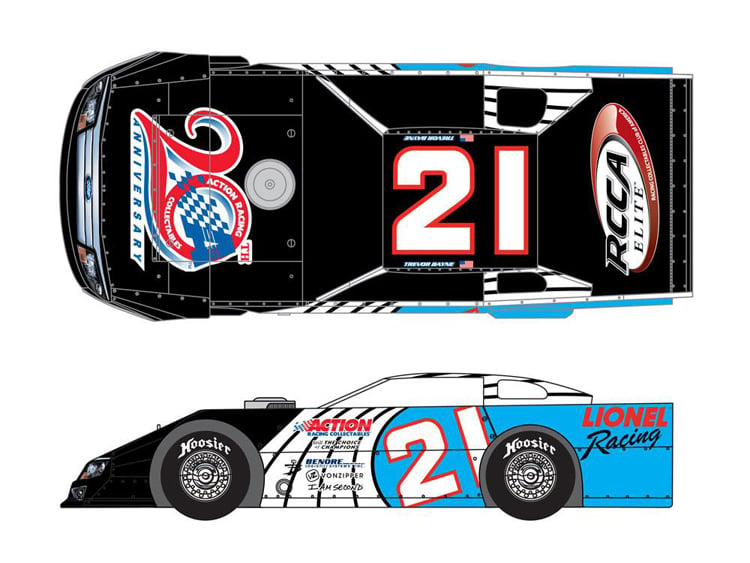 CONCORD, NC – Oct. 8, 2012 – Trevor Bayne’s education as a dirt Late Model driver will get a dose of higher learning when the 2011 Daytona 500 winner competes Wednesday night (Oct. 10) in the Circle K World of Outlaws Late Model Showdown at The Dirt Track at Charlotte.

Less than two months after making his full-fender debut on clay, the 21-year-old Bayne will test his developing dirt-track skills against the country’s best drivers in a 50-lap World of Outlaws Late Model Series event that kicks off Bank of America 500 week at Charlotte Motor Speedway.

With Bayne not running a full NASCAR schedule this season, the youngest Daytona 500 winner in the event’s 54-year history has been dabbling in dirt Late Model racing at tracks near his native Knoxville, Tenn., for the last two months. Wednesday night’s WoO LMS program will mark his second consecutive dirt Late Model ‘road show’ start in a race held in conjunction with a NASCAR Sprint Cup Series weekend.

Bayne is coming off the best run of his fledgling dirt Late Model effort, a fifth-place finish in last Friday night’s Super Late Model feature at Talladega (Ala.) Short Track. He returned on Saturday night to the high-banked oval across the street from Talladega Super Speedway – where Bayne drove the Wood Brothers No. 21 to a 21st-place finish in Sunday’s Sprint Cup event after running out of fuel with three laps to go – and placed 15th in a Southern All-Stars Late Model Series A-Main.

Bayne’s first-ever start at The Dirt Track at Charlotte will come behind the wheel of a No. 21 machine sporting sponsorship from Lionel and Action Racing Collectables (ARC), the popular die-cast brand owned by Lionel that is celebrating its 20th year of producing die-cast race cars. His dirt Late Model will actually carry a color and graphics scheme that Bayne himself helped design (pictured below).

“This year I’ve had a great partnership with Lionel as a spokesman for their Action Racing Collectables die-cast brand,” Bayne said in a press release announcing his dirt Late Model sponsorship deal with Lionel and ARC. “And when Lionel told me they wanted to sponsor me in the dirt race at Charlotte, I decided to get creative and design a really cool 20th Anniversary car for them.”

According to the release, Bayne sketched out his ideas for the car and worked with the Lionel company’s production staff to be sure the design was just right. The finished product will not only be seen on the track but on a 1:24 scale ARC die-cast car that is being produced for Bayne’s one-time-only dirt ride. Fans can find information on ordering a No. 21 Action Racing Collectables Ford dirt Late Model by visiting a Lionel-authorized die-cast dealer or logging on to www.lionelracing.com.

Bayne, who will run the Wood Brothers No. 21 in this weekend’s Bank of America 500 at Charlotte Motor Speedway, will be one of several NASCAR drivers in Wendesday’s Circle K WoO LM Showdown, joining brothers Austin Dillon (2011 NASCAR Camping World Truck Series champion and contender for the 2012 NASCAR Nationwide Series title) and Ty Dillon (current NASCAR Camping World Truck Series points leader) and Josh Richards (a two-time WoO LMS champion who has spent most of the 2012 season concentrating on NASCAR Nationwide Series action).

The WoO LMS contingent will be led by the record-setting Darrell Lanigan of Union, Ky., who enters Wednesday’s $10,000-to-win program with 15 wins in 2012 and a commanding points lead that has him on the verge of clinching his second career championship. Other former WoO LMS titlists expected include Rick Eckert of York, Pa., Tim McCreadie of Watertown, N.Y., and Steve Francis of Ashland, Ky., plus World of Outlaws travelers Shane Clanton of Fayetteville, Ga., Clint Smith of Senoia, Ga., Chub Frank of Bear Lake, Pa., Vic Coffey of Caledonia, N.Y., Tim Fuller of Watertown, N.Y., Pat Doar of New Richmond, Wis., and rookies Bub McCool of Vicksburg, Miss., and Kent Robinson of Bloomington, Ind.

Spectator gates for Wednesday’s program, which also includes a 30-lap feature for the National Dirt Racing Association (NDRA) Late Models, will open at 5 p.m. WoO LMS drivers will participate in an autograph session underneath the grandstand at 5:30 p.m. and opening ceremonies will begin at 7:20 p.m.

Tickets are just $25 for adults and $10 for children 13-and-under for reserved seats.

Fans can get $5 off of their $25 adult ticket for Wednesday night’s Circle K Late Model Showdown when they purchase a 24-ounce premium coffee from a Circle K convenience store. Fans must bring the cup to the ticket office or gate when purchasing a ticket on Wednesday night.

Tickets can be obtained by calling the Charlotte Motor Speedway ticket office at 1-800-455 FANS (3267) or online at www.charlottemotorspeedway.com.