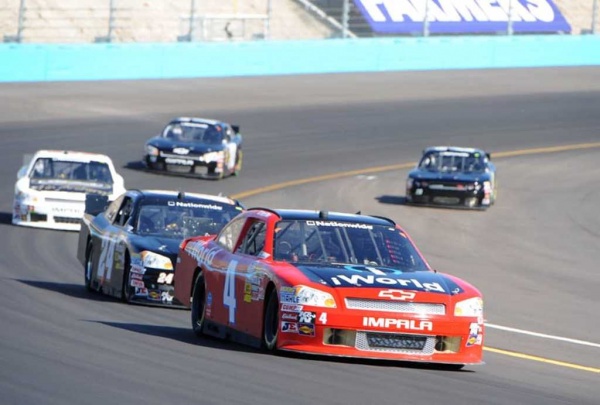 JD Motorsports w/Gary Keller teammates Mike Wallace and Darryl Harr are ready to take on the challenge of Phoenix International Raceway for the NASCAR Nationwide Series race on Saturday.

Wallace, who is currently 12th in the Driver’s Standings, is looking to solidify his points position with two races remaining. Harr is making his eighth start of the year and fourth at PIR.

As announced earlier, the No. 01 Chevrolet has primary backing from DeDe Rogers, who formerly owned a championship Formula Atlantic team (2000) and was named Owner of the Year in 2005 for her DSTP Motorsports. The car will also carry a decal to raise awareness for the Every Kid a King Foundation, based in Louisiana.

The foundation was started by Jim and Dana Bernhard in conjunction with the Shaw Group to help area nonprofits meet the immediate needs of children in the areas of welfare, health and education. Last week, Wallace was a special guest for their fundraiser in Baton Rouge. His car carried a foundation decal last week, and will do so again this weekend at the one-mile oval of PIR.

Harr, a native or St. Alberta, Canada, will pilot the No. 4 Tradebank Chevrolet for the team.

“This has turned out to be a great weekend even before we get to the track. Having DeDe Rogers from DSTP Motorsports backing us is incredible. She’s not only a championship Formula Atlantic championship owner, and the 2005 Owner of the Year – she’s also a great person.

“We’re also carrying the Every Kid a King Foundation decal on the car to help bring awareness to their cause. They’ve been doing some great work in the Louisiana area and I was privileged to attend one of their functions last week.

“As far as racing Phoenix, it’s a flat track where you have to handle real well out of Turns 2 and 4 to get all you can out of the straightaways. If it’s hot, the track is going to be really slick in those turns.

“We have two races left, and this JD Motorsports w/Gary Keller team is going to give it our all to close out the season on a good note. We worked too hard getting to the track, at the track and during the race not to get those good finishes.”