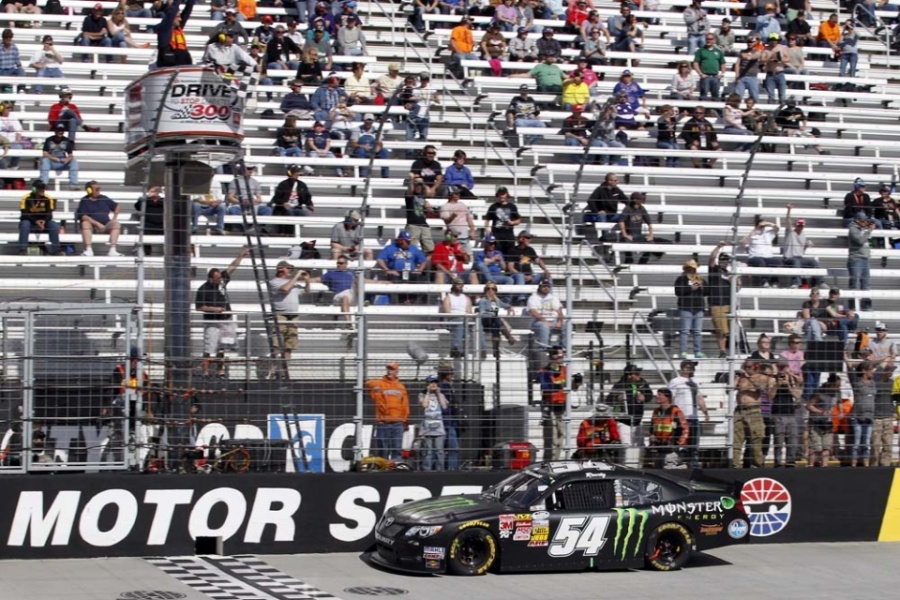 During initial on-track activity at “The World’s Fastest Half Mile,” it was evident that Busch would have the car to beat. Through two practice sessions Friday, the 28-year-old Busch paced the field first and fourth fastest, trying different setups to best balance the car on the fast .533-mile oval. “If you can give me one-half click better into and out of the turn, we’ll be phenomenal. It’s already ‘game over’ but if you give me that, we are really there,” stated Busch to his crew after final practice Friday.

Race day morning, in NASCAR’s newly formatted group qualifying session, the Monster Energy Camry again scored fastest times in the first round and advanced to the second and final segment. Busch’s first lap out saw him second fastest on the board early, so the team came back to pit road and cooled the engine down, which is now allowed by NASCAR. Busch then awaited the last few minutes to go out and post one last fast lap in an effort to gain the pole. The No. 54 team didn’t have the chance, however, as another car hit the wall destroying his race car and so final minutes of the qualifying session were mostly used for track cleanup. The No. 54 drove a few final laps but without advancement before qualifying ended.

Busch and team started Saturday’s Nationwide Series race at Bristol, on row one, outside Kyle Larson who was the pole winner. After the green flag dropped, Busch battled the frontrunners-teammate Matt Kenseth and Kevin Harvick, who proved to be the main competition of the day. Similar to conditions experienced in the spring Bristol event last year, Busch’s car swung between loose and tight and then stayed tight through the majority of the event. Additionally, a high amount of tire wear was of concern and monitored after each pit stop. To tackle the Toyota chassis’ tight exit condition and ensure no tire issues, the JGR team made three pit stops during the course of the event, changing tires, taking on fuel and making few adjustments.

The end of the event saw several yellow flag periods for on-track incidents, from which crew chief Adam Stevens was heard over the team radio, “It’s going to be a wreck-fest from here, so track position is key.” A reply from the lead position, “10-4, I agree,” Busch confirmed before locking down the victory after 300 miles of hard racing.

The NASCAR veteran celebrated taking the checkered flag with a spectacular smoke show, while his No. 54 crew saluted him. When interviewed post-race, the excited driver described, “It’s cool and anytime you’re able to succeed it’s obviously fun. I have a great bunch of guys and everyone on the A-team and the B-team here — the whole 54 Monster Energy Toyota Camry race team does a great job. Everyone at JGR (Joe Gibbs Racing), JGR Engines, chassis, bodies — Nationwide Insurance and the fans, we appreciate their support and being with us here today and cheering us on or cheering others on — it’s always fun to win here in Bristol for us and for anybody. Glad it was us today.”

Post-race, Busch further addressed the media upon review of his day, “The track was entirely different from practice. Practice it was all along the bottom, everybody was running down there or maybe a half a groove off the bottom or so. Really it was just nowhere near where it was today. We had to make a lot of adjustments to our race car throughout the race and make it better. It came in and it worked and the guys did a great job. Adam (Stevens, crew chief) made some really great calls for us — I appreciate him and being able to get ourselves here in victory lane again.”
Busch further described the race as it played out, “The biggest thing was just how much the track changed from practice — it was entirely different, not even close. We really had to change our car a lot today. Adam (Stevens, crew chief) made some really good calls on the pit box and tried to get me freed up and trying to get me to where I could roll and make some speed up. This Monster Energy Toyota Camry was awesome. It was in practice and it was again here in the race. A couple of those guys got close — (Matt) Kenseth, he was really fast. He was lightning fast there much of the day and I was having a hard time catching him. I was just able to bide my time through traffic a little bit better than he did and he got stuck and I passed him kind of the same way he did to me earlier in the race. Hopefully, we can sweep the weekend.”

When asked what makes Busch so strong at Bristol, he answered, “I definitely like coming to Bristol — I always have — my first time here I remember was 2004 and it was a test with my Hendrick Nationwide guys at that time. The throttle hung getting into turn one and I just killed a car. That wasn’t any fun. Coming back and learning, I’ve definitely gone through some trials here with the Cup cars. The first couple of times here was a rough go around for me. Then sort of got it figured out and was just able to start running up front, started leading laps, started winning races and that’s been the biggest thing. Why all that is? I don’t know. I just enjoy coming to Bristol, to the banked race tracks. This reminds me of one of my favorite race tracks — Winchester Speedway in Indiana that I raced late models at and just a real high speed race track. It takes guts to go fast I guess, especially at Winchester for sure. This is a place that’s just like it and now with the top side being what it is versus the bottom, it seems like guts prevail here a little bit more as well.”

The No. 54 Monster Energy team solidifies first place in the Owner’s Point standings, now seven points in the lead.

The next event on the NNS schedule is the TreatMyClot.com 300 on Mar. 22, 2014 from Auto Club Speedway in Fontana (Ca.) with the race television broadcast starting at 4:30 p.m. EST on ESPN. Busch will make his fifth start of the season behind the wheel of the Joe Gibbs Racing No. 54 Monster Energy Camry.