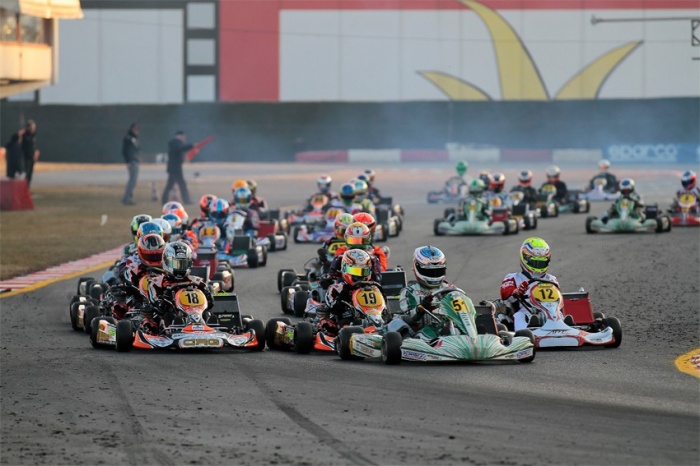 Another great beginning of season for the South Garda Karting circuit of Lonato for the 18th edition of the Winter Cup, in schedule from 15th to 17th February 2013 in the classic race of the CIK-FIA calendar.

In the three categories – KZ2, KF and KFJ – there are 280 entrants, with the participation of all the major manufacturers and all the top international teams.

The race of the most performing gerabox category, the KZ2, is going to be particularly gripping: this year there are lots of new protagonists and several big names at their debut with new teams, all looking for more glory. Among the many new protagonists in this category, the presence of the KF1 world champion Flavio Camponeschi with Tony Kart is outstanding; he will race side by side with the winner of the past edition, the Belgian Rick Dreezen, and his teammate Marco Ardigò, Mirko Torsellini and the Indonesian Armand Philo, at his debut in KZ2 and near to move to car-racing.

Among the excellent debutants in KZ2 also Charles Leclerc with Art GP, last year’s protagonist in KF2 thanks to his win in the WSK Euro Series. With Art GP also Ben Hanley, among the best drivers of the last edition of the Winter Cup.

In KZ2 Energy confirmed its participation with the European Champion and winner of the WSK Euro Series, the Lithuanian Simas Juodvirsi, besides the 2011 WSK Euro Series champion Joel Johansson. Birel will race with Paolo De Conto, Roberto Toninelli and their new driver Jan Midrla. At his debut on a Birel chassis (but always with the AVG-Racing team) also the 2009 World Champion Arnaud Kozlinski.

Maranello Kart, too, seems to be very competitive in KZ2 thanks to its new drivers Yannick De Brabander (at his comeback to the Italian manufacturer after winning the KF2 Winter Cup with Maranello in 2007), Massimo Dante and Marco Zanchetta, while CRG will be represented by the 2011 European Champion Fabian Federer, besides Davide Forè (but on thisoccasion racing with the Czech team DTK). Among the private teams, always for CRG, also Andrea Dalè and the Austrian Marcel Mueller.

Also Praga team stands a good chance with the 2012 KZ1 World Champion, the Dutch Bas Lammers, besides the Czech Patrick Hajek (winner of the Winter Cup in 2011) and Martin Doubek, as well as the DR team of Danilo Rossi with Riccardo Negro, excellent protagonist of the category and winner in the recent WSK Final Cup.

In KF (formerly KF2), among the about 100 entrants, Luca Corberi is at his debut in the category. He is the 2012 KF3 world champion with the Kosmic official team. With Kosmic also the French Armand Convers. Among the favourites also the quick Dutch Max Verstappen, winner of the last edition and, for this season, confirmed as official CRG driver. The other drivers for CRG are the Finnish Niclas Nylund, the Brazilian Vitor Baptista, and the French Ingrid Girard.

Among the favourite teams also Art GP, which has among its drivers the English Ben Barnicoat, reigning European champion. With Birel the English George Russell, the European champion, will make his debut. LH Racing fields lots of drivers too: many Swedish drivers at the start. The same can be said for the Chiesa Corse team, which has Lance Stroll and Tom Joyner among its drivers. With Energy sarà the strong French Dorian Boccolacci, at his debut in KF2.

The junior category, the KFJ (formerly KF3) is very “crowded” too, with more than 100 entrants. Among them Giuliano Alesi’s name is outstanding: he is the son of the former Ferrari F1 driver Jean Alesi, racing for the Intrepid team.

In KFJ the duel between the two brothers Alessio and Leonardo Lorandi is going to be very interesting, given that Leonardo has just arrived from the 60 Mini (where he has won almost all, from the Italian championship to the WSK Euro and Master Series, besides the WSK Final Cup) to race in the major category next to his brother Alessio (recent winner of the KF3 Italian championship).

North America will have a handful of driver competing once again this year, with Porsche driver Patrick Long the only driver to win at the event (1998). The United States will not have any drivers in KZ, but will see Sargeant brothers Dalton and Logan representing the Red, White, and Blue in KF and KFJ. Dalton will take position with the prestigious Tony Kart Racing Team in the competitive KF category while Logan is set to race with the Ward Racing operation, also aboard a Tony Kart, in KFJ. Representing the ‘Great White North’ will be Zachary Claman-DeMelo and Lance Stroll. The two talented Canadian will race in the KF class. Claman-DeMelo will race as part of the CRG Spa effort, while Stroll will continue to run under the Chiesa Corse operation.

All the information on http://www.southgardakarting.it